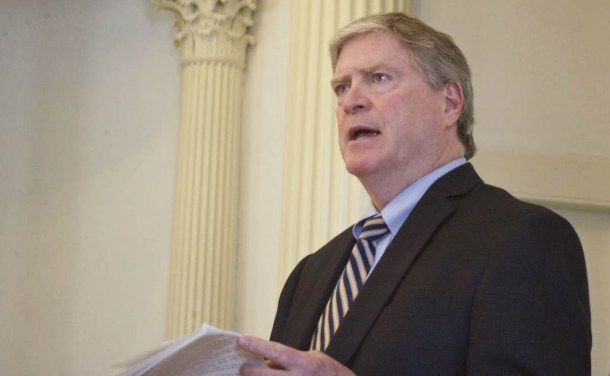 The leader of the Vermont Senate will not be returning next year.

Senate President Pro Tempore John Campbell said Friday he will not seek re-election to the Senate this November. Instead, he will take over as executive director of the Vermont Department of State’s Attorneys and Sheriffs soon after this year’s legislative session concludes.

Campbell has served Windsor County since 2000; he was elected to Senate president in 2010. His tenure as leader of the 30-member chamber has been rocky at times. Four years ago, he survived a coup by fellow Democrats. Before being elected Senate leader, Campbell held the Senate’s second highest post, majority leader, for eight years, under Senate Presidents Peter Welch and Peter Shumlin.

Campbell, 62, an attorney, said he was leaving to make way for new leadership and for financial reasons. His departure creates unprecedented vacancies in all four key decision-making posts in Montpelier: governor, lieutenant governor, speaker of the House and Senate president.

A frenzy can be expected for Campbell’s job as Senate leader. Chittenden County Sens. Tim Ashe, the chair of the Finance Committee, and Majority Leader Philip Baruth, who both backed Campbell when his job was threatened, are viewed as obvious contenders. Health and Welfare chair Claire Ayer, D-Addison, is also mentioned. Ann Cummings, D-Washington, tried to unseat Campbell in 2012. The fight is expected to be among Democrats. They hold a 2-1 majority in the 30-member chamber.

In a 20-minute interview at the Statehouse, Campbell discussed his reasons for stepping down, his challenges as Senate quarterback and accomplishments. He expressed frustration with his inability to solve some of Vermont’s most persistent problems — rising property taxes and health care costs — and said it was time for someone else to try. He said there was a danger of getting stagnant in the job.

“Clearly, we haven’t made significant changes. We haven’t really made that final breakthrough that’s really changed things. And if you are not able to make that change, if you’re not able to direct the conversation to say: ‘OK, we are going to make this change.’ Then if there’s people behind you who think that they can, then you should step aside and allow and see if they can,” Campbell said. “I thought I could.”

Campbell cited sponsoring the marriage equality bill in the Senate and fighting to win the votes to override Gov. Jim Douglas’ veto in 2009 as his proudest moments. He also cited important environmental and health legislation and the requirement to label genetically modified foods as important steps.

“There were achievements, but still, on those issues that are central to our state’s financial security and for people who want to have their children grow up this state, I feel like we’ve almost hit a block in the road, a point in the road (where) I have to make a personal decision and that is: if I don’t feel that I’ll be able to contribute something significantly to the betterment of this state at this time, then I probably should see if some other folks that have some other ideas just might be able to do that,” Campbell said.

Campbell also cited a frustration that legislation is passed without proper followthrough. He cited the fund to clean up Lake Champlain and other waterways, its passage much ballyhooed last year, which he says is on shaky ground, dependent on the property transfer tax, a revenue source added at the last minute.

“We go ahead and pass all these laws that sound great. We get there in front of the microphones and the cameras and say, ‘We’re good, we did these great things.’ And yes, people will support you and get behind you, but then the next year you come back, you forget it and it’s on to the next thing,” he said.

Campbell said he was also motivated to leave the Senate for financial reasons. He said he put aside his private law practice after becoming Senate leader. Two years ago, he took a $30,000-a-year part-time post as deputy state’s attorney in Windsor County, drawing controversy after he lobbied for the position in Montpelier and then asked for the job. Campbell said he’s made $15,000 to $18,000 as a lawmaker. He and his wife, Kathy, are finalizing a divorce. His property tax bill in Queechee, he said, is about $14,000 a year.

Campbell, a former Florida police officer, said the State’s Attorneys and Sheriffs Association job will not involve lobbying the Legislature. Lawmakers are considering a State Ethics Commission bill that includes a prohibition on lawmakers becoming lobbyists for one year after they leave office. The executive director represents the views of the state’s attorneys and sheriffs to the Legislature, according to the department website. Campbell said he will be called to testify, not lobby. Campbell will replace David Cahill, who was appointed Windsor County state’s attorney last month.

Campbell plans to keep his Senate seat for the rest of his term.

Campbell’s tenure as Senate leader was marked by disorganization the first two years and charges by fellow senators that he used his power to bottle up bills. He agreed to disperse power to avoid a Senate mutiny. Two years ago, he was easily re-elected without controversy and by most accounts, some disagree, Campbell gets better marks for running the Senate.

Campbell admitted his start was “rocky” but then “evened out.” He only hung on in 2012 after asking his fellow senators to give him a second chance.

“When you go into something, you try to do your best job and you adapt,” Campbell said. “And what I think I was able to do was learn and realize the weaknesses in my style or in some of the things I was not able to that I may not have been as proficient in as I thought.”

Campbell, who is gregarious, sensitive, and admits to a temper, did not want to rehash what motivated the attempted 2012 coup, but said the experience made him a better leader.

“I certainly have feelings as to what could have been different or what variables were in place that might have contributed. That’s just looking back. Then you start pointing fingers other places. I’m not big on that,” Campbell said, adding, “I think I’ve become a far better leader knowing and having experienced some of the things that I experienced.”

After Chief of Staff Rebecca Ramos left two years ago for a lobbying firm, drawing controversy, he hired Erika Wolffing as chief of staff and Conor Kennedy.

Campbell’s politics were hard to pigeonhole. A Catholic, he supported gay marriage, but opposed death with dignity legislation. He refused to support Progressive/Democrat David Zuckerman when he listed himself Progressive first, but endorsed Ashe, who ran as a Democrat/Progressive.

The view that Campbell was not as strong a leader as his predecessors, Welch and Shumlin, was partly because of his style, he said, including a lack of interest for higher office. He also said compared to the speaker of the House, the Senate president has much less power.

“I’ve never been the type that’s gone out, like had a press conference every week or every couple of weeks or run around the state trying to get my name into the papers because that just wasn’t my style,” Campbell said.

“My style was trying to make sure that my people, my colleagues were able to work together regardless of what political party there were in. That was what I saw would be the best way to achieve goals, with my goal being how can I leave this office … knowing or saying or believing I have improved the lives of Vermonters. And I think I have,” he said.

Lt. Gov. Phil Scott, who presides over the Senate, said Campbell has a “big heart” and had difficulty keeping control partly because his party runs from conservative to progressive and because their majority has been so big. Scott, a Republican running for governor, and Campbell are friends.

“It’s not easy being in his role and satisfy everyone with a very, very expansive party. There’s many different ideas and when you’re in the supermajority, I think it’s even more difficult,” Scott said. “So he’s had his hands full. I think he’s learned a lot from the mistakes he’s made in the past and I think he’s risen to the challenge.”

Scott added: “He certainly hit his stride more and has been trying to prioritize what’s really important to running the Senate and has been more engaged.”

But Scott said his friend may have suffered trying to please too many at the same time.

“I think that John has an incredibly big heart and he wants to please everyone,” Scott said. “Sometimes that’s to his detriment. That’s his biggest struggle in life: is being a good person and tries to satisify everyone and you can’t sometimes. You have to make tough decisions, draw criticism of some and stick with it.”

Campbell said he loved being a legislator and helping a constituent solve a problem. He also spoke of the satisfaction helping to pass legislation like gay marriage, impacting the lives of others.

“You can’t get any better than that,” he said. “You talk about adrenaline or about something that really could put a smile on your face, that’s it.”

Campbell said he will miss the job and the Statehouse, where he expects to testify.

“I’ll be here. But It’s going to be sad, You’re going to come in here and go “Oh, God do I really miss the place’ and you can’t help but not,” Campbell said.

Thursday afternoon, however, he said he got a reminder of priorities. A compromise on the wind debate had unravelled and Campbell said he went for a walk to cool off. In front of the Department of Motor Vehicles, he ran into a boy with a Special Olympics gold medal and congratulated him on how well he’d done.

Thanks for reporting an error with the story, "Senate President Campbell is not running for re-election"

If students go to a party, can they then go to school? State mulls a policy decision