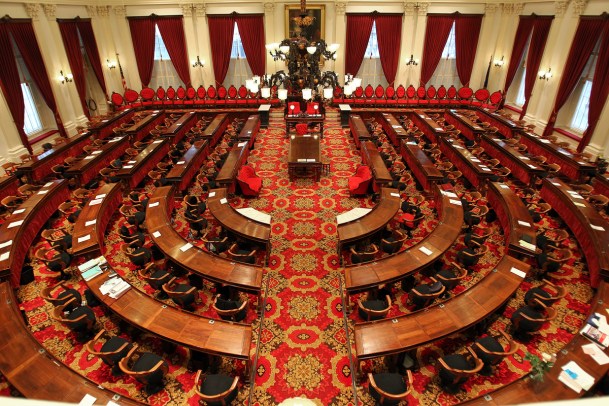 Behind-the-scenes maneuvering temporarily delayed final action by the Senate on a sick leave bill, but the bruised feelings left behind may linger much longer.

Meanwhile, Gov. Shumlin stumped for Hillary Clinton in New Hampshire, took a small swipe at the state treasurer and said when it comes to his controversial money-raising budget proposals: “I’m not hearing any ideas, I’m just hearing people say no.”

Backroom deals, feeling blindsided and, of course, Bernie-mania dominated this week’s discussions on “Inside the Golden Bubble.”

Senate President Pro Tem John Campbell was still smarting Friday morning after being caught off guard the day before, when Sen. Bill Doyle announced he wanted to change his mind on a bill the Senate had already approved. In particular, Doyle said he had made a mistake and now wanted to support an amendment that would have exempted businesses with five or fewer employees from the sick leave requirements. The amendment had failed by a single vote. 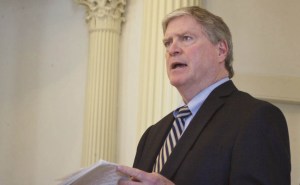 The 89-year-old Doyle, R-Washington, said he had misunderstood the vote.

Campbell smelled a rat. He maintained Doyle had been persuaded to change his mind after a concerted, under the radar effort by Republicans, including Rep. Patti Komline and Lt. Gov. Phil Scott. Even though they are members of the opposite party, Campbell considers them both close colleagues. He felt blindsided.

The Senate leader was particularly peeved he didn’t get a courtesy heads-up about the Republican plans and only found out when Doyle, on the Senate floor, asked to have his vote reconsidered. The carve-out amendment had failed the day before by a 15-14 margin with Doyle in the majority. (The full bill passed by a 21-8 margin.)

“It was clear from what I found out later on, there was concerted effort on the part of opponents of this measure, that they had gotten to Senator Doyle, had had him switch his vote, I start to think some of it through intimidation…and they were successful in getting him to reconsider his vote,” Campbell said.

“Some type of a heads-up. That to me would have been a hell of a lot more professional,” he said. “What was done I think was scurrying around, waiting until the governor got out of town, waiting until I had to go up on the podium, waiting for the right people to be in the room at the right time,” he said.

Campbell was in the cloakroom adjoining the Senate chamber when Doyle made his request, catching the Senate leader by surprise. He called the maneuvering behind the scenes ahead of time “distressing” and “distasteful” and “stealthy.”

“There will be conversations,” he said.

Komline said there was nothing nefarious. She said she found out through former Rep. Patricia McDonald on Wednesday night that Doyle now wanted to support the exemption. (McDonald has run unsuccessfully for the Senate in the three-member Washington County district.)

The Dorset Republican was unapologetic she didn’t let Campbell know what was going on ahead of time. 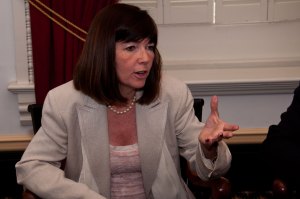 Asked if it were a case of “All’s fair in love, war and politics,” Komline replied: “In this building it’s politics. If he had known about it, he would have worked to get people to not support it.”

She said Campbell should not take it personally.

“I’m impassioned about this issue,” she said. “This is not about relationships.”

Komline said she was frustrated with the sick leave bill, which would grant workers, under the Senate plan, three paid days off in their first two years of employment, then five after that. To Komline, that was “one more hit” on Vermont small businesses.

The House passed a sick leave bill last year with no exemption for the smallest companies.

Komline admits when the Senate takes the issue back up next Wednesday, the amendment may not make it. Speaker Smith has said he does not support the exemption. Campbell, however, says Doyle’s action put the bill “into the category of uncertainty.”

Gov. Shumlin said he supports the sick leave bill and wants it to apply to all employers, even the smallest. He said it makes no sense to require an employee to work “and sneeze on the cake’’ just because of the size of the company.

On divesting the state’s pension funds from investments in coal and ExxonMobil, the governor said respected Treasurer Beth Pearce but that she was wrong to give him the coal shoulder. As for opposition against his proposal to tax dentists and some doctors to snare more Medicaid funds, the governor sounded tired of lawmakers and others being reflexively opposed to his ideas. 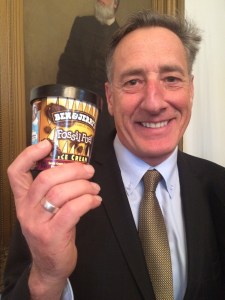 Shumlin stumped for Clinton on Thursday. He called both Clinton and Sanders “anti-establishment.”

The father of two daughters, Shumlin said: “You can not tell me that the first woman president of the United States would be ‘establishment.’ Because we have never established that before.”

Thanks for reporting an error with the story, "Inside the Golden Bubble: Backroom deals, bruised feelings and Bernie"