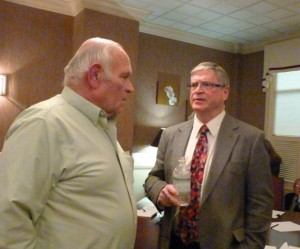 Sens. Dick Sears, left, and John Campbell talk during the Senate Democratic Caucus at the Capitol Plaza Hotel in Montpelier on Nov. 27. Photo by Anne Galloway

Call it the mea culpa strategy. If at first you don’t succeed, try, try again, and again, to get other people to let you try again. Or to quote Sen. Philip Baruth, with apologies to James Carville: The Democratic Party is the party of second chances.

That was the line Baruth used to explain why he nominated John Campbell for Senate president pro tem at a special caucus meeting Tuesday evening in Montpelier. Campbell beat his opponent, Sen. Ann Cummings, for the Senate leadership post, 15-6.

Baruth, a second-term senator from Chittenden County who counts himself among the liberal contingent, frequently bumped heads with Campbell over “hot button” issues, such as the child care unionization bill. Senators were often at odds as a caucus, he said, and we “didn’t always do credit to the institution.”

“I sometimes believed issues weren’t getting a fair hearing,” Baruth said. “I felt the Senate was run in a top-down way.”

That attempt at control was bucked by the liberal rebels of the party and led to chaos on the floor and blaring news headlines about a dysfunctional Senate. The contentiousness softened after the last legislative session, Baruth said, and in the summer Campbell reached out to talk with him about how to change his leadership style.

“I’m convinced he’s made a real solid attempt to address some of these concerns, which are already under way,” Baruth said. “I believe John is committed to making the Vermont Senate a smoothly running, functional and equitable institution.”

“I support him because he is committed to reworking the problematic things he and many of the rest of us got wrong,” Baruth said.

It wasn’t exactly a ringing endorsement of the Senate leader, but it rang true — even for Campbell himself who openly talked about his failings as a leader. He explained to fellow Democrats that though he didn’t deserve Round 2, he wanted an opportunity to make good a second time around. He would, he said, mend the errors of his ways. 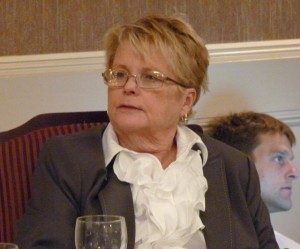 Campbell has been widely criticized for his disorganization, his reluctance to seek support from the wider Senate (he tended to rely on a select few for political cues), and his personal involvement in issues taken up by the body.

“I had a lot of shortcomings in the first term, I’m not going to back away, I’m not going to make excuses,” Campbell said. “I’ve certainly learned from them. I’ve always believed communication is the most important aspect of what any leader can have. I think I failed there. The office was always busy. I wasn’t listening to everyone, I was listening to a small group of people.”

“All of you know my time management skills may not be the best,” Campbell said. “I am a poster child for ADD.”

Campbell said he would pledge “to work with every one of you to make me a better leader and make the Senate a place where you’re all proud to serve.”

Still, even the caucus got off to a rocky start with bickering over the schedule for the day’s meeting. Despite the complaints, 21 out of 23 members of the Democratic caucus participated. Only Jane Kitchel and Ginnie Lyons were absent.

Cummings, chair of the Senate Finance Committee, said she was challenging Campbell because she found the stories in the press about the Senate’s “dysfunction” painful, especially in light of the public’s generally low opinion of government.

“I’ve been in the Senate for 16 years,” Cummings said. “I’ve always been proud of being in the Senate … until the last two years. Things were not smoothest the first year. We didn’t do a reassessment about how we can do things better until there was a challenge. I’m challenging because I think we can do better.”

In her view, Campbell could make small changes to address his deficiencies as a leader but a “wholesale personality change,” as Cummings put it, is not possible.

The senators voted by secret ballot. Six cast votes for Cummings; 15 for Campbell.

They also nominated Dick Mazza, the conservative Democrat from Colchester, to the chairmanship of the three member Committee on Committees. Tim Ashe nominated Mazza and praised him for making fair committee assignments.

The caucus did not nominate a majority leader or assistant majority leader. A second pre-session caucus will be held sometime between now and January. The full Senate will vote on the nominations when the session begins.

Thanks for reporting an error with the story, "Campbell hangs on to Vermont Senate leadership post"