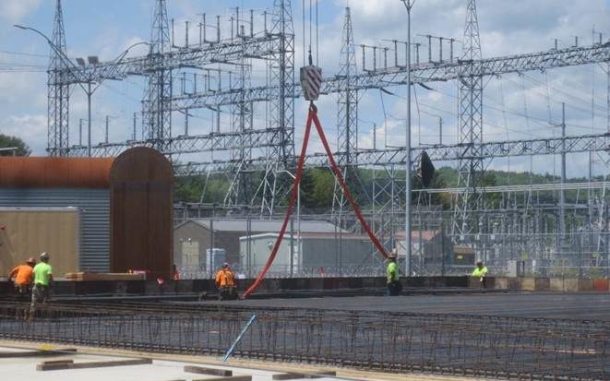 Crews place rebar for a second fuel pad at Vermont Yankee. The pad will hold casks containing radioactive spent nuclear fuel, which currently is stored in a cooling pool in the Vernon plant's reactor building. Photo courtesy of Entergy

[V]ERNON – In April, crews were supposed to have begun the expensive, high-security transfer of Vermont Yankee's spent fuel into sealed casks.

But that work has not started, and plant owner Entergy has reduced its projections for how many casks will be filled this year.

Getting the fuel move done on time is an important element of Entergy's plan to sell the shut-down Vernon plant. And administrators say that, despite the delay, the project remains on track for completion in late 2018.

“The fuel loading schedule is based on many factors, with contingency built into the schedule to assure timely completion,” said Joe Lynch, Entergy Vermont Yankee's government affairs manager.

Though Vermont Yankee hasn't produced power for 2½ years, most of the plant's radioactive spent fuel – close to 3,000 assemblies – remains in a cooling pool inside the plant's reactor building.

The plan is to place all of that fuel into so-called dry casks, specially constructed containers that are considered much more secure than the cooling pool. Vermont Yankee already hosts 13 such casks and eventually will need a total of 58 to hold all the plant's spent fuel.

In June 2016, after an extended and sometimes contentious process, Entergy received the state's permission to build a second concrete pad for hosting those dry casks.

Work began soon after that, and Lynch told a May 25 meeting of the Vermont Nuclear Decommissioning Citizens Advisory Panel that the pad project is “moving right along” and is on schedule. The panel viewed recent photos of workers placing a maze of reinforcing bars as a precursor to pouring concrete.

Entergy also had announced in January that the process of moving spent fuel into dry casks was expected to start in April. Loaded casks initially can be placed on an existing concrete pad while crews continue to construct the new one.

But as of Wednesday, cask loading hadn't started. Lynch said Entergy still is “completing the prerequisites” for the project. 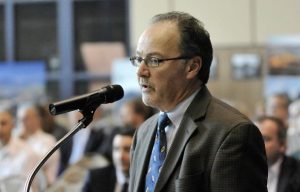 “Entergy is focused, as always, on employee and public safety and quality, making sure that every aspect of this project is performed successfully,” Lynch said in an email. “We are finalizing procedures and ensuring all required equipment has been tested and functioning properly since the last fuel move campaign in 2012.”

He added that “we needed more time to achieve these important goals.”

The delay appears to have downsized the fuel move project for this year. At last week's advisory panel meeting, Lynch said Entergy is estimating that, “if we start in the next couple weeks, which is our target, we'll be loading approximately 20 dry casks in 2017.”

That's seven fewer than Entergy had said it was hoping to load this year during earlier presentations, though Lynch said Wednesday that the initial 27-cask plan for 2017 was only an estimate.

If Entergy fills 20 casks this year, that will leave 25 to be loaded next year.

The fuel project is expected to cost $143 million, a price that includes pad construction, cask purchases and loading. Entergy has contracted with Florida-based Holtec International, the cask manufacturer, to handle all aspects of the job.

Holtec has asked the federal Nuclear Regulatory Commission for permission to transfer some of the plant's spent fuel into casks earlier than usual – before the standard five-year cooling period. 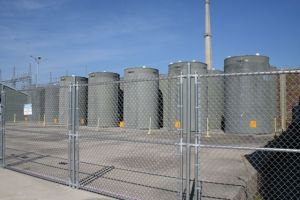 Besides the expense, moving radioactive spent fuel also attracts scrutiny due to safety issues. Vermont Yankee critics have expressed concern about the proximity of nearby Vernon Elementary School, but Entergy has said the project will be carried out safely and securely.

The company will institute “heightened security” at the plant during the cask loading campaign, which features a hulking, slow-moving vehicle nicknamed “Cletus” to carry loaded casks a short distance from the reactor building to the concrete pads.

While proceeding deliberately, Entergy administrators also have the calendar in mind due to the pending sale of Vermont Yankee to NorthStar Group Services, the New York company that has promised to speed up decommissioning by decades.

Pending regulatory approvals from the state and the NRC, NorthStar wants to close on its purchase by the end of 2018 – providing that Entergy and Holtec have safely stashed the plant's spent fuel in casks.

In testimony submitted to the Vermont Public Service Board last year, NorthStar Chief Executive Officer Scott State said “all spent fuel is expected to have been moved to the (cask storage facility) by the time this transaction closes and active decommissioning begins.”

Thanks for reporting an error with the story, "Vermont Yankee fuel move into more-secure storage is delayed"