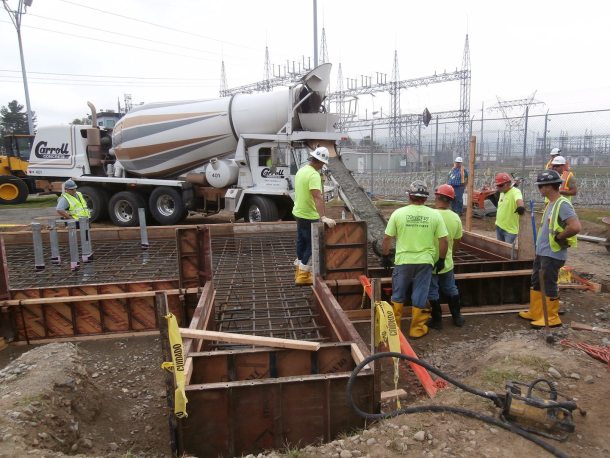 When they finally received that permit in late June, they didn’t waste any time getting started.

Entergy representatives on Thursday said the construction of a spent fuel storage facility is well under way, with a few dozen contracted workers having recently installed a massive generator to provide emergency power to the complex.

Construction will continue into 2017. But officials say getting the generator in place was a major milestone as crews begin a $143 million effort to transfer all of the plant’s radioactive spent fuel into sealed casks.

Vermont Yankee stopped power production in December 2014, and all fuel was removed from the plant’s reactor the following month. But the majority of those fuel assemblies — 2,996 of the 3,880 on site — remain in a cooling pool inside the reactor building.

The other assemblies have been stashed in 13 “dry casks” on a concrete pad near the reactor. The state Public Service Board approved construction of that storage area in 2006.

Entergy administrators say they will need a total of 58 casks to hold all of the plant’s spent fuel. So they applied in June 2014 for a state certificate of public good to build a second storage pad adjacent to the existing pad.

A lengthy and sometimes contentious permit process followed. Part of the delay was at Entergy’s request, as the company needed more time for engineering work. 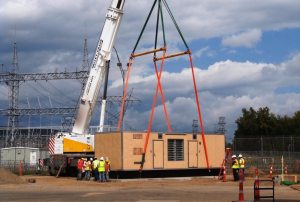 Work began several weeks ago on a $143 million project to transfer all of the Vermont Yankee plant’s radioactive spent fuel into more stable storage in sealed casks. Photo courtesy of Entergy

But there also were numerous objections to Entergy’s plans. Some wondered whether the fuel pad’s location could negatively affect the cost and schedule for Vermont Yankee decommissioning, while others questioned the safety and visibility of the proposed storage facility.

Entergy vigorously defended its proposal, saying any attempt to relocate or redesign the spent fuel pad would take years and cost hundreds of millions of dollars.

Work on the fuel storage project began the following month. While Entergy is supervising, Florida-based Holtec International has been contracted to handle all aspects of the job including constructing the pad, fabricating storage casks and loading those casks on site.

This month, crews installed a 200-kilowatt diesel generator that will supply backup power to the fuel storage facility and other Vermont Yankee facilities. The generator — which sports a 1,200-gallon fuel tank, according to state documents — is expected to be operational in October.

“Twelve of them have been completed out of the 45 additional casks that we need,” Lynch said. “Those cask systems will be delivered in the fourth quarter of this year.”

The concrete fuel pad — which will be 3 feet thick and measure 93 feet by 76 feet — can’t be poured until crews remove an old storage building called the North Warehouse. Given the potential for asbestos and other non-radiological waste, the warehouse work will be overseen by the state Department of Health and the state Agency of Natural Resources.

The fuel pad work will continue into 2017, when Entergy expects to begin moving spent fuel from the cooling pool to dry casks. Lynch reiterated on Thursday that all fuel will be in dry cask storage by the end of 2020.

All told, the project is expected to cost $143 million. Entergy has taken out lines of credit to cover that, and the company expects to take legal action against the federal government to try to recoup that cost.

That’s because federal officials have not met their legal obligation to create a central repository for the nation’s nuclear waste. While the U.S. Department of Energy has begun planning for the eventual removal of Vermont Yankee’s spent fuel, there’s not yet a place to take it.

The fuel pad project is the biggest thing happening at Vermont Yankee at the moment. By the end of June, Entergy had finished draining and “laying up” plant systems that are no longer needed, Lynch told the advisory panel.

Administrators are still shutting down buildings at the plant site. “We’ve been consolidating our staffing and use of those buildings so that we can remove services and power,” Lynch said. “The obvious reason is to minimize the cost impacts on the (plant) as we head into the next winter season.”

Entergy also is still wrangling with a water intrusion issue, as groundwater continues to leach into the plant’s turbine building. That water must be trucked off site for out-of-state disposal because it is contaminated with low levels of radioactive tritium.

Last month, a plant spokesman said the problem had been curtailed enough that the company was no longer were pursuing a proposal to discharge tainted water into the Connecticut River.

Mike McKenney, who serves as technical coordinator for Vermont Yankee decommissioning, said the company now is working to restore an underground barrier between the turbine and reactor buildings.

Officials expect to see “a significant reduction” in water leakage due to that effort, McKenney said Thursday. “Based on the results of that, we’ll determine what our next steps are and what our options are,” he said.

Leshinskie, the state nuclear engineer, said he recently participated in a federal Nuclear Regulatory Commission meeting regarding lessons learned from Japan’s Fukushima nuclear plant, which was disabled in 2011 by a powerful earthquake and tsunami.

Leshinskie said he was struck by the similarity between the water control measures that have been implemented at Vermont Yankee and at Fukushima since that disaster. The key difference, he said, is that Entergy has been able to reduce the water incursion rate at Yankee, while Fukushima is still dealing with 5,000 to 10,000 gallons of water incursion daily.

In August, a Yankee spokesman said the inflow rate had dropped under 700 gallons a day, from a high of 2,500 to 3,000 gallons daily disclosed in February.

“In a few more months, we’ll know whether the current efforts (at Vermont Yankee) have been successful,” Leshinskie said.

Thanks for reporting an error with the story, "Vermont Yankee gets $143 million fuel storage project in gear"