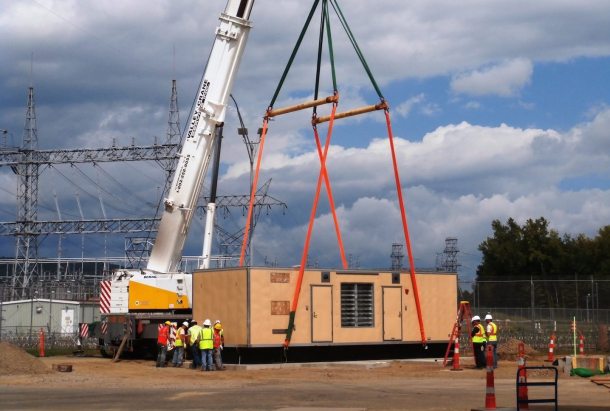 Work began a few months ago on a $143 million project to transfer all of the Vermont Yankee plant's radioactive spent fuel into more stable storage in sealed casks. Photo courtesy of Entergy

[V]ERNON – Federal inspectors are satisfied with Vermont Yankee's environmental monitoring, spent fuel storage and handling of radiological waste – including contaminated water that had accumulated at the shut-down plant.

A new report from a Nuclear Regulatory Commission inspection identifies “no findings of safety significance” at the Vernon facility.

The NRC in 2015 terminated its resident inspector program at Vermont Yankee, which stopped producing power at the end of 2014. But the federal agency still conducts regular inspections at the plant, and the latest such quarterly survey ended Sept. 30.

On the first issue, federal inspectors checked out groundwater-monitoring wells and radiation monitors, among other equipment and procedures. They found that “environmental sampling stations are properly maintained and all equipment is operable.”

The inspectors also examined the plant's spent fuel pool and related support systems. That pool, situated within the reactor building, will hold the majority of Vermont Yankee's radioactive spent fuel until Entergy can transfer that material into sealed casks.

The NRC found that the fuel pool's “instrumentation, alarms and leakage detection systems used during decommissioning are adequate to assure the safe wet storage of spent fuel.” Additionally, Entergy is “performing all required surveillances and maintenance” on systems that support the fuel pool.

NRC inspectors earlier this year provided the first public report on a water-infiltration problem at Vermont Yankee's turbine building. The issue was severe enough that plant administrators at one point used commercially available swimming pools to store the water, which was contaminated with low levels of tritium due to contact with the building.

Those pools are long gone, as Entergy switched to different storage methods and has been shipping the water off site to an out-of-state disposal facility. The company has said the issue is now largely under control.

During the latest quarterly inspection at Vermont Yankee, NRC inspectors looked at radiological waste storage systems and also reviewed the plant's program for shipping such waste, including contaminated water.

Shipments were “properly classified, described, packaged, marked and labeled and were in proper condition for transportation,” officials wrote. The inspectors also praised Entergy's training of Vermont Yankee personnel on NRC and U.S. Department of Transportation regulations.

In response to the NRC inspection results, plant spokesman Marty Cohn said that “Entergy remains committed to the safety of its employees and the surrounding community as it proceeds in the decommissioning of Vermont Yankee.”

Thanks for reporting an error with the story, "Feds endorse Vermont Yankee fuel, waste handling"