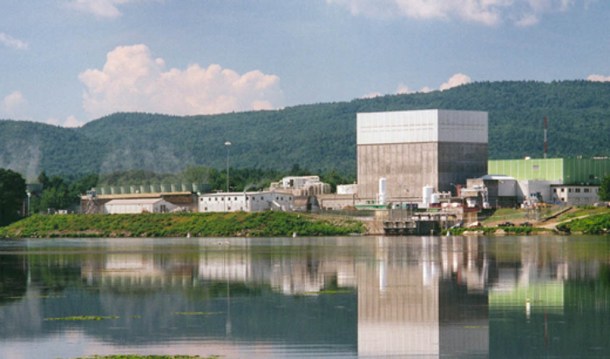 [V]ERNON — Greater-than-anticipated amounts of groundwater — 90,000 gallons so far — are encroaching into a key building at Vermont Yankee, and plant administrators are weighing options to deal with the contaminated liquid.

Those options include shipping the water — which an official described as having “slight radioactive contamination” — to an out-of-state storage facility. There also has been preliminary talk of releasing water that is within allowable pollution limits into the Connecticut River, though state officials say they've not received any request to do so from plant owner Entergy.

The federal Nuclear Regulatory Commission also is monitoring the water situation, and it appears to be improving: The agency noted in a recent inspection report that “the groundwater intrusion rate has slowed considerably” at the nuclear plant's turbine building, and there is still excess storage capacity to handle it.

“Our inspectors will continue to track Entergy’s efforts to address the issue, but it does not pose any threat to public health and safety,” NRC spokesman Neil Sheehan said.

Entergy spokesman Marty Cohn said that, while the amount of water is unexpected, the issue itself was part of the company's decommissioning plans and will not cause any significant additional costs. “We anticipated this water management program in our decommissioning costs estimate,” Cohn said. “All we're doing now is figuring out how to dispose of it.”

Vermont Yankee ceased producing power in December 2014, and Entergy has spent the past year preparing the plant for an extended period of dormancy that will precede decommissioning. The NRC says Yankee is in a “post-operation transition phase.”

Last year, the NRC pulled its resident inspector from the plant. But the agency continues to visit and inspect the site. The most recent quarterly inspection report, dated Jan. 28, was based in part on two site visits and identified “no findings of safety significance.”

Within that report, however, is a paragraph saying the plant's “radioactive water inventories were increasing due mainly to the intrusion of groundwater.” An NRC inspector “determined that VY is considering options regarding future disposal of on-site radioactive water inventory and is also considering options for future action to further mitigate groundwater intrusion,” the document says.

Sheehan said the issue is ongoing. Since the plant shut down, “Vermont Yankee has experienced greater groundwater intrusion into the lowest level of the turbine building,” he said. “Generally, the groundwater totals a few hundred gallons a day, though there are occasional spikes, including one recent day when the amount rose to about 1,500 gallons.”

He cited increased rainfall as one factor. A bigger problem is that the plant is no longer operational, since higher temperatures from power production had led to greater evaporation of intruding groundwater in the past.

Sheehan said Entergy has been working to slow the flow by hiring a contractor to seal cracks in the turbine building and drilling “interceptor wells” nearby. Cohn clarified that those are not deep wells, but rather horizontal holes that act as drainage routes. “What you're trying to do is redirect the water,” Cohn said.

The NRC inspection report says Entergy is tracking the plant's water inventory daily, and Sheehan said the company has been pumping and storing groundwater — about 90,000 gallons at this point. He characterized the liquid as having “slight radioactive contamination” after having come into contact with the turbine building.

Cohn said the location of the water is what dictates its contamination status. “Any water that comes into the protected area — rain, etc. — becomes part of our onsite radioactive water inventory,” he said. “We have to come up with ways to dispose of it.”

The NRC says Entergy is developing a radioactive water management plan for Vermont Yankee. Its scope will extend beyond the current groundwater intrusion issue; Sheehan said the site has more than 1 million gallons of radioactive water. That includes water in the torus, a doughnut-shaped reservoir at the base of the reactor building, and in a condensate storage tank.

Shipping radioactive water away from the plant appears to be the most immediate proposed disposal solution.

“One element of this plan would be to ship approximately 200,000 gallons of the torus water to U.S. Ecology Inc. in Idaho by truck for disposal,” Sheehan said. “Entergy last month submitted an exemption request to the NRC seeking approval for these shipments.” It wants an answer by April 15, he said.

While such a shipment falls under federal regulations, state officials say they are aware of Entergy's request and want to keep an eye on any transfer of radioactive water. “We're evaluating what kind of monitoring we would want to do,” said Trey Martin, deputy secretary of natural resources.

Some of the water could end up in the Connecticut River. “All nuclear power plants are allowed to discharge slightly radioactive water to adjoining waterways provided the radioactivity is within allowable federal limits,” Sheehan said.

Any proposed discharges would be likely to cause controversy, and they would be regulated by the state. Martin said his agency has no permit requests to review, so he can't take a position on the matter at this point.

“(Entergy) would have to come to us to talk about a discharge,” Martin said. “If they do come to that, we'll obviously take a very hard look at that.”

Also watching closely is Bill Irwin, the state Health Department's radiological and toxicological sciences chief. At a meeting in Brattleboro last week, Irwin made the case for ongoing, intensive Vermont Yankee groundwater monitoring by both Entergy and the state.

“We certainly are interested in what's occurring there relative both to the groundwater into the turbine building” and Entergy's disposal plans, Irwin said Wednesday. “Unfortunately, we don't have a lot of information about that, and I've asked for additional information.”

Thanks for reporting an error with the story, "Groundwater problem emerges at Vermont Yankee"