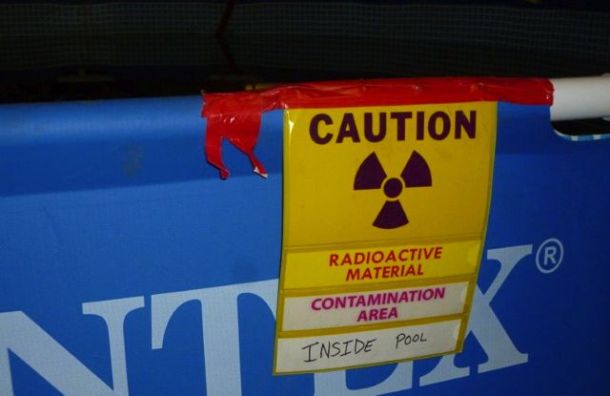 A caution sign on a swimming pool containing contaminated water in the basement area beneath the Vermont Yankee reactor. The plant’s owner said Wednesday it is no longer storing the water in pools. File photo

[B]RATTLEBORO — While Vermont Yankee administrators continue to struggle with a groundwater problem, swimming pools are no longer part of the solution.

At a Wednesday news conference to provide an update on the Vernon nuclear plant’s decommissioning process, officials said they’ve stopped using commercially available swimming pools to store contaminated groundwater that has seeped into the turbine building.

The pools were “a prudent and cost-effective near-term way of storing the water,” said Joe Lynch, Vermont Yankee’s government affairs manager. But he added that such storage is no longer needed.

“They are now all drained, and now water is stored either in very large industrial bladders or in steel tanks located outside the turbine building,” Lynch said. “So we’re better positioned to be able to start moving that water off site.”

Plant owner Entergy has begun moving that water because it has been flowing at a higher-than-expected rate — sometimes thousands of gallons per day — into the turbine building. The liquid has a low level of radioactivity from the presence of tritium, a radioactive isotope of hydrogen that is present in the building.

The first tanker truck full of Vermont Yankee water departed for a treatment facility in Tennessee a few weeks ago. “This week, we’ve thus far shipped two additional 5,000-gallon shipments down to Tennessee, and we’ll ramp that up,” Lynch said.

On Wednesday, Lynch disclosed that Entergy has asked federal officials to allow a second facility, U.S. Ecology in Idaho, to accept Vermont Yankee’s water. The Nuclear Regulatory Commission may act on that request as soon as next month, he said.

The Idaho option would allow Entergy to get rid of more water faster, since Lynch said the Tennessee facility will accept no more than 20,000 gallons a week. Plus, “having multiple options helps us, because it keeps the cost down,” Lynch said.

It’s not yet clear what that cost will be, though the money is coming from Vermont Yankee’s decommissioning trust fund. Lynch said he expects to disclose more financial information related to the groundwater problem soon.

“When we started this, the cost looked somewhat prohibitive,” he said. “But we have been able to move that cost down substantially.”

Lynch said the shipping process has been made somewhat easier by the presence of three 20,000-gallon steel tanks outside the turbine building. Trucks can load directly from those tanks.

Shipping the water away, however, won’t solve the problem. That’s because groundwater has continued to seep into the turbine building’s lower level, officials said Wednesday.

“Typically, we’re seeing it under 1,000 (gallons per day), but we’re in a season now where we would expect increased groundwater,” Lynch said. “So we really need to also take care of the problem of mitigating it long term.”

Entergy has tried to seal cracks in the building, with mixed results. Lynch said the company still is looking into diverting the water by drilling wells near the building, but that is a complex proposition.

“We’re working with a couple of very highly qualified hydrogeologists that do this for a living. They’re trying to help us locate the wells,” he said. “Then you’d have to determine how many gallons per minute that you have to pump. Then you have to have the storage.” 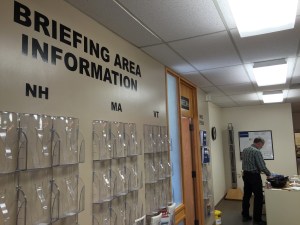 Lynch said the groundwater problem has not spread to other structures. “The other building that would have a deep foundation would be the reactor building, and there’s no water intrusion in that area that I’m aware of right now,” he said.

Most of the session focused on upcoming emergency changes at Vermont Yankee resulting from regulatory changes approved by the NRC. The federal agency ruled late last year that a decreased risk of accidents at the shut-down plant meant Entergy could scale back its emergency planning.

Vermont Yankee will retain an emergency response organization after that date, McKenney said, but it will be much smaller. That’s true both in terms of staffing and the company’s footprint, because the facilities on Old Ferry Road — Entergy’s Joint Information Center and emergency operations facility — will be vacated. 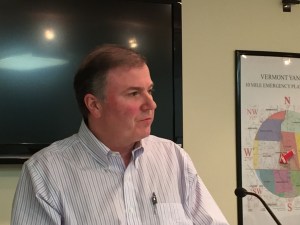 “At that point, the (plant’s) control room will become our main emergency response facility,” McKenney said.

Vermont Yankee spokesman Marty Cohn said Entergy still is considering its options for the Old Ferry Road properties. For tax purposes, Brattleboro has valued the land and buildings combined at more than $2 million.

The properties likely will be put on the market, and “frankly, we’ve received a lot of inquiries,” Cohn said.

In addition to the internal changes happening next month, McKenney addressed the many outside changes related to revised emergency planning. Vermont Yankee’s emergency planning zone, which now touches 18 towns in three states, will be downsized to the boundaries of the plant itself.

Most importantly, that means Entergy no longer will be federally mandated to provide financial support for the former emergency zone towns and state governments. But it also means the end of many familiar Vermont Yankee accoutrements such as tone-alert radios, emergency preparedness calendars and Entergy-maintained sirens.

Last year, Entergy offered towns a choice: The company could remove those sirens or leave them in place to be used for other emergency purposes, though towns choosing the latter option would be responsible for future siren maintenance.

After hearing back from all of those towns, “out of the 37 sirens, we’ll be removing 23,” McKenney said. “And we’ll be starting that removal shortly after April 19.”

Vernon is the only Vermont town where officials chose to keep the sirens, McKenney said. Other towns retaining the warning devices for local use are Gill and Leyden in Massachusetts, and Chesterfield, Hinsdale and Winchester in New Hampshire.

Thanks for reporting an error with the story, "Officials: Tainted water no longer in swimming pools at nuke plant"