[F]RANKLIN — Going out on Lake Carmi with John Tucci of EverBlue Lakes feels a lot like being on a guided fishing trip.

He deftly maneuvers his light gray Louisiana bayou boat into the deeper waters of Lake Carmi. His co-pilot of sorts, Jeffrey Connors, points out a school of walleye fry swimming off the port side of the boat.

But the customized bayou boat has reels of black hose, not fishing line. And the FishFinder by Tucci’s steering wheel shows the location of 80 underwater ceramic oxygen diffusers instead of big fish.

The diffusers spread along the bed of the deeper parts of Lake Carmi are part of a $1 million aeration system Tucci and his crew were busy getting “governor ready” last Wednesday.

Looking out at the clear blue water with a backdrop of a lighter blue cloud flecked sky, it’s hard to believe this lake in northwestern Vermont is so polluted that lawmakers have officially designated it a “lake in crisis.” 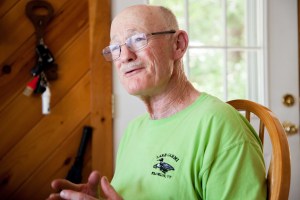 Peter Benevento is the president of the Lake Carmi Campers Association. Photo by Mike Dougherty/VTDigger

But in 2017, this same body of water was plagued with cyanobacteria blooms that were bad enough to close beaches for weeks.

“I mean it looks like a mosaic when you look down at the algae. It was unbelievable. It has patterns and colors, swirls,” said Pete Benevento, president of the Lake Carmi Camper’s Association, in an interview at his camp on the lake last Wednesday. “I mean if you looked at it, and you took a piece of it and you put it on a canvas, you’d say, oh wow. But, you know, in the water, it’s just horrible.”

That year, heavy spring rainfall resulted in nutrient laden runoff going into the lake. And then an unusual cold spell in August caused the water in the lake to turn over earlier than normal — a phenomenon normally associated with autumn, when air temperatures drop, and the cooled surface water sinks — releasing phosphorus from deep in the lake.

The lake water turned over again in October, leading to blooms through November. Tensions flared that fall, with some residents wanting stricter regulation of nearby dairy farms and the state Agency of Agriculture saying that blooms stemmed from phosphorus that had accumulated in the lake before stricter water quality regulations were put in place. Camp owners, residents and environmental advocates converged on the Statehouse in 2018, demanding action. 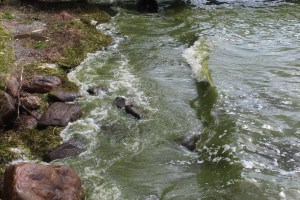 During an algal bloom in 2017, the water along the shore of Lake Carmi was green. Courtesy Larry Myott

Lawmakers passed a bill in 2018 requiring the state Agency of Natural Resources to come up with a “crisis response plan” for Lake Carmi.

Lake Carmi — along with larger, deeper nearby Lake Champlain -- has been plagued for decades by phosphorus pollution, largely from agricultural runoff. It has been classified as “impaired” under state water quality standards. In 2009, the state reached an agreement with the federal Environmental Protection Agency to reduce phosphorus coming into the lake by 40%.

Angela Shambaugh, an aquatic biologist with the state Department of Environmental Conservation, said the Lake Carmi watershed is getting close to hitting that target. The state has been working with farmers, UVM extension, the town of Franklin, camp owners, the Franklin Watershed Committee and other partners to implement practices to prevent nutrient laden water from entering Lake Carmi.

But, as the 2017 algal blooms highlighted, Carmi is also plagued by the release of “legacy” phosphorus that has accumulated over the years in the sediment at the bottom of Lake Carmi.

So with the crisis response plan, the state Agency of Natural Resources moved ahead with an in-lake solution — the aeration system — to complement the ongoing water quality work on farms, roads and lakeshore properties surrounding the lake. 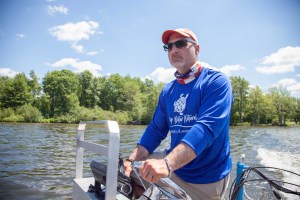 John Tucci is the president of Everblue Lake Solutions, a Michigan company installing an aeration system on Lake Carmi. Photo by Mike Dougherty/VTDigger

“The aeration system should reduce the intensity and duration of these blooms by cutting off much of the food that feeds them,” Julie Moore, ANR Secretary, said during the public unveiling of the system last Thursday.

Tucci, who has a background in industrial engineering, started developing aeration systems a decade ago as an alternative to chemical lake treatments at the small Michigan lake where he has a house. The Lake Carmi system is the biggest one his company has done yet.

Compressed air goes through a tube to a “manifold,” which shoots the air into 40 different pipes spread out at the bottom of the lake. The pipes feed into ceramic diffusers with “a billion holes” that send a column of air into the lake, which continuously mixes the water, Tucci explained.

“Aeration is the right move for this lake because if we can keep oxygen down at the bottom all the time through the summer, it prevents that chemical release from happening,” he said. “No phosphorus, no algae.”

The state is working with volunteers to take weekly water quality samples to monitor the progress of the aeration system over the next 10 years. Tucci said the state has a contract with EverBlue Lakes for the first couple of years to make any needed adjustments.

Larry Myott, another longtime Carmi camp owner who grew up in Franklin, said he has been seeing “green water” every August at Lake Carmi since he was a kid.

“It’s not something brand new, but it’s been getting progressively worse,” he said.

But both he and Benevento expressed optimism about the aeration system in an interview Wednesday.

“I think that this installation this week is making for a whole new attitude here at the lake and in the town of Franklin and in the state of Vermont,” Myott said. “A more positive attitude, you know, that something can be done for water quality and we’re doing it.” 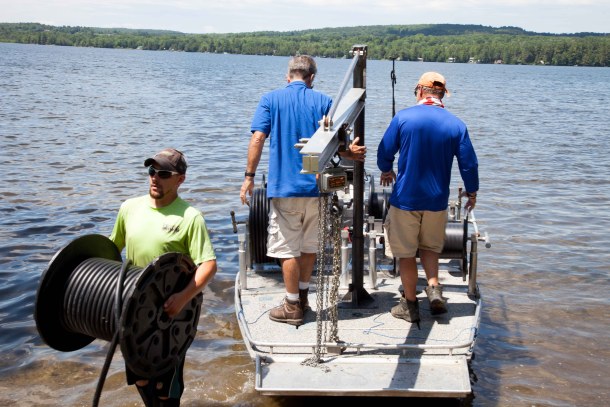 Everblue Lake Solutions has run about 45 miles of hose under Lake Carmi, roughly the distance from Franklin to Burlington. Photo by Mike Dougherty/VTDigger

Thanks for reporting an error with the story, "New technology stirs hope for health of Lake Carmi"