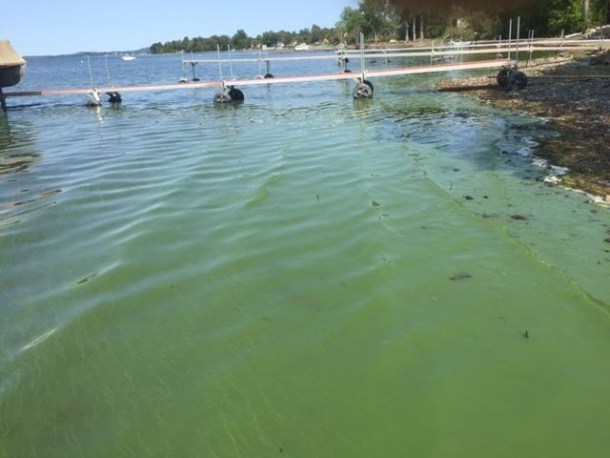 An outbreak of blue-green algae has closed Lake Carmi in northern Vermont.

[A] toxic cyanobacteria bloom has kept Lake Carmi in northern Vermont closed for the past three weeks, and officials are hoping to introduce oxygen into the lake as a short-term fix.

The blue-green algae results from excessive phosphorus in the lake, most of it originating in manure and industrial fertilizers spread by dairy farmers in the area.

The lake has been under a federal order since 2009 to slash the amount of phosphorus pollution from farms, roads and septic systems. Efforts have succeeded in stopping the increase of phosphorus levels, but it will be at least a decade before polluters meet the federal limits designed to keep the lake free of cyanobacteria blooms.

Julie Moore, secretary of the Agency of Natural Resources, said past pollution is likely responsible for the current outbreak.

Lake Carmi has been polluted by phosphorus for more than a century. The chemical bonds to silt, and the phosphorus-laden silt has settled to the bottom of the lake, Moore said.

It’s not known exactly what dynamics are involved, but when certain conditions deplete the lake of oxygen, phosphorus in the silt dissolves into water. In the spring, as water from the lake bottom circulates to the top, that phosphorus-laden lower layer gets exposed to sun, enabling blue-green algae to thrive, Moore said.

That’s likely what happened in Lake Carmi, Moore says. The state hopes to provide a short-term fix by spending $250,000 to introduce more oxygen into the lake, blocking phosphorus on the lakebed from being released into the water.

Lake Carmi experiences cyanobacteria outbreaks almost every year, but this year is especially bad, said Robert Cormier, who lives a quarter of a mile from the shore.

“If you know what split-pea soup looks like, it looks like pea soup,” Cormier said of the cyanobacteria bloom. “We are starting to see fish die-offs."

Blue-green algae covers the entire lake surface, he said. The current bloom has lasted more than three weeks, and the state has issued a high-alert warning urging residents to stay away from the water.

Farm closures in Burlington, Winooski and other areas in the past led to an influx of dairies in Franklin County, where Lake Carmi’s located, Cormier said. Today, between 30 percent and 40 percent of Vermont’s cattle live in Franklin County, “and the land can’t handle it,” he said.

“We have too many cows for what the land can handle,” Cormier said.

About 85 percent of Lake Carmi’s phosphorus pollution comes from farms, according to the EPA.

James Ehlers, a Democratic candidate for governor and the director of Lake Champlain International, a clean-water advocacy group based in Burlington, said Vermonters will have to dig deep financially to clean up Lake Champlain.

Big companies are passing the costs of industrial pollution off on Vermonters, when their customers should bear those costs instead, Ehlers said.

“These fields should be taken out of production,” Ehlers said. “If we spend any tax money it should be to those whose property values are being destroyed by an industry that enjoys a special privilege -- they basically have a license to pollute.

“Vermonters are subsidizing the shareholders of (Ben & Jerry’s Ice Cream corporate parent) Unilever,” Ehlers said. “The consumers of these products should be the ones sharing in the cost, not the victims.”

More information about the Lake Carmi outbreak, and up-to-date information on cyanobacteria blooms throughout the state, is available at the Vermont Department of Health website.

Thanks for reporting an error with the story, "Lake Carmi closed because of algae bloom"