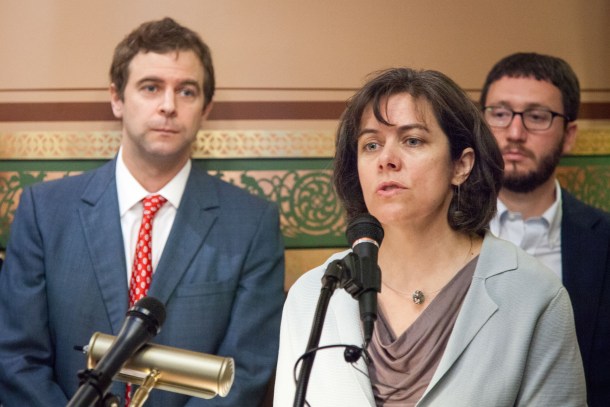 A day after Govs. Phil Scott and Chris Sununu of New Hampshire announced a proposal to enact a voluntary, two-state paid family leave program, Democratic leaders in the Statehouse balked at the proposal and said they would once again be introducing a measure to create a mandatory paid leave system funded by a payroll tax.

Democrats had long planned to reintroduce a paid family leave bill this session, but on Thursday they detailed their proposal, which will be introduced in the House in the coming weeks, and is similar to legislation they passed — and the governor vetoed — in 2018.

But they said that a paid family leave program shouldn’t be voluntary, because it wouldn’t be able to attract the participation required to make it affordable.

“It seems almost impossible to believe that under a voluntary program, those who wish to participate under such a program would not be paying a far greater price than the legislation that passed last year,” Ashe said.

The paid family leave bill backed by Democratic lawmakers would be funded through a universal .93 percent payroll tax split between employees and employers.

Johnson said the plan would be cheaper than the governor’s and yet offer more time and pay: employees struggling with illness, caring for sick family members, or taking care of a newborn child would be able take 12 weeks of leave while receiving 100 percent of their wages.

The governor’s proposal would give employees six weeks of leave and 60 percent of their earnings each week.

“The cost of the program is a little less expensive, but the benefit is almost double, so you get twice the benefit at a slightly lower cost,” Johnson said.

The Democrats’ proposal would cost 70 cents per day per employee, for those earning a median income, according to Johnson.

Under the governors’ plan, Vermont and New Hampshire’s combined 18,500 state workers would receive the paid family leave benefit, administered through a private insurer and funded by the state. 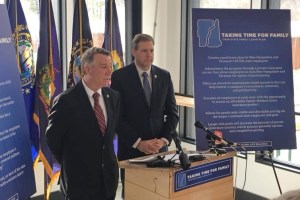 Scott and Sununu say that leveraging the pool of both states’ public workers will bring down the cost and make the benefit affordable for private employers.

Private employers with more than 20 employees and 100 percent employee participation in the program would receive the same rate as the state — a cost which the governors said could be as low as one dollar a day per employee.

Unveiling their plan Thursday, Scott and Sununu touted their voluntary plan as a benefit that will help recruit and retain new workers, without imposing a “mandate” on employees or employers.

Aparna Mathur, an economist at the American Enterprise Institute, a right-leaning think tank, and a leading researcher on paid family leave policy, shares the concern that a voluntary program may not be sustainable.

Other states that have enacted paid family leave law, including Massachusetts, California and Washington, have programs that are mandatory and funded by payroll taxes.

“That does seem to be the more feasible and better experimented with structure, in the sense that we know that it works,” Mathur said.

“If you’re basically telling people, paying the payroll tax is optional, then that does make you question where the money is going to come from, if for some reason not enough people opt into the program,” she said.