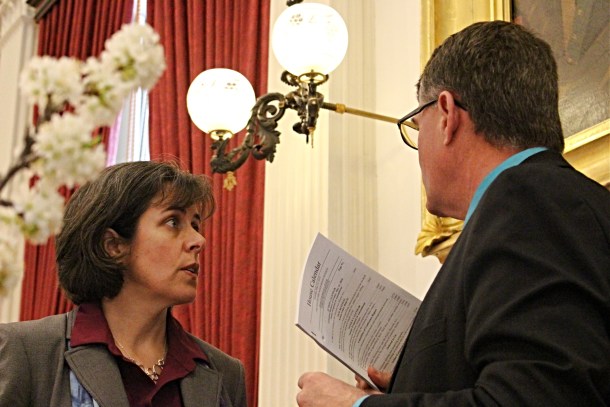 Speaker of the House Mitzi Johnson, D-South Hero, speaks with Minority Leader Don Turner, R-Milton, during the Saturday session at the Statehouse. Photo by Anne Galloway/VTDigger

[T]he 2018 biennium of the Vermont Legislature came to a close with no money deal in hand.

Despite bipartisan agreement on new gun restrictions and legalization of small amounts of marijuana earlier in the session, it has ended on a sour note.

It’s the first time in memory that the governor and lawmakers have left Montpelier without an agreement on the budget and major tax changes.

Democratic lawmakers say they had no choice but to move ahead with key money bills that Republican Gov. Phil Scott intends to veto.

Legislators responded with the only leverage they had at hand: refusing to schedule a veto session. That means Scott will have to call lawmakers back for a special session, which opens a potential can of worms for the governor.

In a special session, lawmakers can pass bills that didn’t make it before adjournment. And bills can be passed on a majority vote, instead of the two-thirds vote required for a veto override.

The rift between the Legislature and the governor’s office started last year, in the beginning of the biennium, when Scott proposed a statewide health care benefit for teachers just a few weeks before the end of the 2017 session. Lawmakers attempted to strike a compromise, but complained that the governor repeatedly moved the goalposts, making it impossible for them to negotiate.

Scott again this year has been steadfast in keeping his no new taxes or fee pledge. This was to be expected -- the governor has said he will do whatever it takes to keep his campaign pledge to make Vermont more affordable. 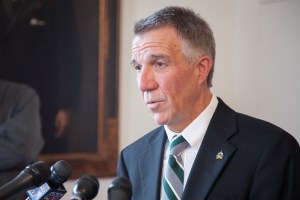 That put a damper on lawmakers’ attempts to reform the education financing system, to bolster mental health initiatives and to create a mechanism for funding clean water initiatives to restore Lake Champlain, which has been tainted by phosphorus runoff from farms and parking lots.

The tension between the Republican governor and Democratic Legislature on fiscal matters was also predictable. What’s new is the level of intensity of the partisan divisions in Montpelier, which have been exacerbated by bombshells thrown from the governor’s office. 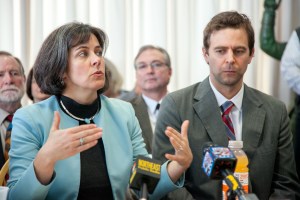 In an uncommon move, he issued a sweeping veto threat out of the blue in a memo sent to legislative leaders in the second week of March. The governor identified a dozen bills on his hit list that he says will hurt the state’s business climate, including an increase in the minimum wage and a paid family leave initiative.

Veto threats are a rare political move for the state’s chief executive. In years past, governors, Republicans and Democrats alike, have not uttered the “v” word until after adjournment.

And so, Scott’s ultimatums, which have been repeated early and often, have not exactly inspired trust with legislators.

What little confidence was left was further eroded by an eleventh hour curveball thrown two weeks ago. At that point, the meetings stopped altogether.

On May 1, the governor introduced a five-year plan to cut $300 million from projected statewide school spending. The broad-brush proposal lacked policy detail and draft legislative language. It would take two weeks for proposed legislation to be drafted -- two days before the session finished.

While the proposal included several initiatives lawmakers had already agreed to move on, such as a plan to change the way special education is funded and a statewide health care benefit for teachers, there were several new items in Scott’s plan that went far beyond what lawmakers had anticipated, including a statewide threshold for staff-to-student ratios.

Democrats cried foul, saying the cutoff was a one-size-fits-all solution that shifted control of schools to Montpelier. The Scott administration eventually dropped the idea.

The sticking point remains the governor’s insistence on using $58 million in one-time money to fill a gap in the education fund and buy down property tax rates, which are slated to go up 5 cents for homesteads and 7 cents for nonresidential property taxpayers. 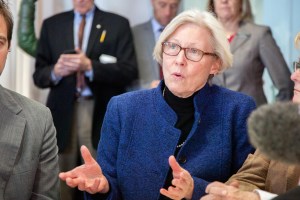 Democrats in the House and Senate balked at the idea of using such a large amount of unexpected surplus and tobacco settlement money to level fund the rates.

Lawmakers say the state won’t be able to make up that hole next year. The gap is expected to grow by another $10 million to $40 million next year, according to the Joint Fiscal Office. Using one-time funds in this fashion, they say, is like putting expenses on a credit card.

The House and Senate agreed instead to use $9.6 million in one-time money and reduced the increase in property tax rates to 2.6 cents for homeowners and 5.5 cents for nonresidential property taxpayers.

The looming veto threat wasn’t the only factor affecting adjournment.

The House GOP threatened to use a parliamentary maneuver to delay the session into next week. Minority leader Rep. Don Turner, R-Milton, said he wouldn’t suspend the rules and allow the House to take up legislation the Republican caucus opposed unless Johnson agreed to limit the number of bills taken up on Saturday.

The gamesmanship continued Saturday with a House GOP proposal to keep state government running through Aug. 1 should the Legislature and the governor fail to reach a deal on the money bills before the fiscal year ends on June 30. Under Turner’s amendment to the Pay Act, spending would continue at fiscal year 2018 levels through that period.

Turner’s proposal sparked a harsh response from Rep. Kitty Toll, D-Danville, who accused the minority leader of “not respecting Vermont values of working together to get the job done.” 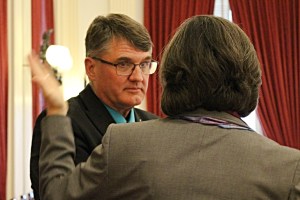 House Minority Leader Don Turner, R-Milton, listens to Speaker of the House Mitzi Johnson, D-South Hero, ahead of the start of the House session on Saturday, May 12. Photo by Anne Galloway/VTDigger

Toll said the unresolved fiscal issues could hurt the state’s bond rating on Wall Street. “We can’t jeopardize the financial health of our state because of politics,” she said, conveying a message from Treasurer Beth Pearce.

With that drama behind them, lawmakers got down to work and pushed through a handful of final changes to bills and wrapped up business -- for now -- knowing that they’ll be back in just a few weeks.

That fate was secured by comments made by Scott in his farewell address to the Senate in which he said he “simply can’t support adding to the tax burdens of Vermonters.”

As lawmakers left Montpelier late Saturday night, that’s where the gulf between the Scott administration and Democratic leaders remained.

“I’m sure we’ll see each other soon,” Scott told senators after they adjourned.

Thanks for reporting an error with the story, "ANALYSIS: Lawmakers leave without a deal on taxes and budget"