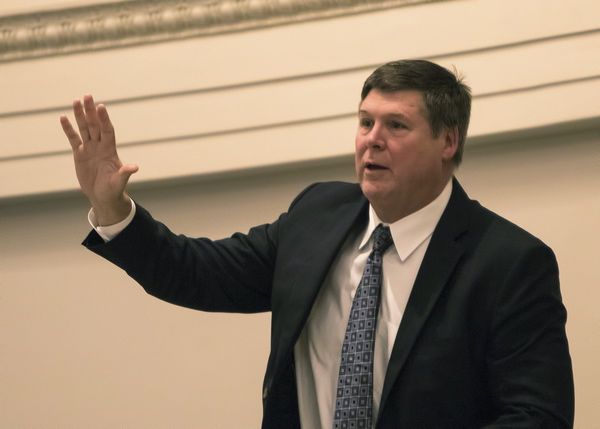 Al Gobeille, head of the Green Mountain Care Board, stands up as he is recognized by Gov. Peter Shumlin in his 2016 budget address. Photo by Roger Crowley/VTDigger

In his annual budget speech to the Legislature on Thursday afternoon, the governor described some of his proposals to fill a Medicaid gap of $50 million to $60 million in the fiscal year 2017 budget. His administration outlined the others during a morning briefing with reporters.

Shumlin is planning to save about $4.7 million in state and federal money on Medicaid expenses by offering women access to long-acting reversible birth control, such as intrauterine devices and contraceptive implants, before they leave the hospital after giving birth.

The move is meant to save money by reducing unintended pregnancies and therefore potential burdens on Medicaid. Administration Secretary Justin Johnson said private insurance companies already offer long-acting birth control to women immediately after they give birth, but Medicaid just started offering the service. About 40 percent of pregnancies in Vermont are unintended, he said.

Shumlin is also proposing to move lower-middle-income pregnant women off the Medicaid program to save $2.25 million in state and federal money. Currently, the program allows pregnant women with incomes up to 213 percent of the federal poverty level to get state health insurance. The budget proposes reducing that eligibility threshold to 138 percent of the federal poverty level, which is the cutoff for nonpregnant adults to qualify for Medicaid.

The proposed and current income thresholds for pregnant women translate to $16,243 and $25,070 a year.

Had the change been in effect this year, Medicaid would have paid for 298 fewer pregnancies, according to the Department of Vermont Health Access.

Women no longer eligible for Medicaid would need to start buying their health insurance through Vermont Health Connect.

They would receive substantial subsidies to pay for their commercial insurance. But it would be cheaper for the state to pay for those subsidies than for having the women on Medicaid.

The governor is also proposing a 2.35 percent provider tax on independent doctors and dentists. He said the revenue would be used to increase reimbursement levels for providers who see Medicaid patients. Hospitals and nursing homes are already paying a similar tax, and their rate is 6 percent.

The administration estimates the expanded provider tax would generate $17 million. The state would match the revenue with $20 million in federal Medicaid money to slightly increase how much the state pays doctors to treat low-income people.

Low reimbursement rates are blamed for driving up private insurance rates. The raise likely wouldn’t lower commercial insurance costs, Johnson said, but could help doctors who see a lot of Medicaid patients stay in business. According to the Shumlin administration, Medicaid pays providers 75 percent of what a service costs, and Medicare pays about 87 percent.

Shumlin’s funding proposal falls short of his earlier idea to place a 0.7 percent payroll tax on employers in order to pay family doctors and dentists the same rate that Medicare pays. That would have raised about $90 million and drawn down $100 million in federal funding.

The tax proposal contradicts Shumlin’s statement in December that he would not raise revenue and instead would “let brighter minds, I guess, try to figure that out.” He also said in November that it would be “heartless” to sign people up for Medicaid and then “nibble away around the edges” at their benefits.

Some worried about Medicaid changes

House Speaker Shap Smith, D-Morrisville, said he doesn’t understand the change to eligibility of pregnant women on Medicaid. “What worries me is it saves money for the government, but it puts pregnant women in a worse position,” he said. “I want to make sure that’s not what’s happening.”

Sen. Jane Kitchel, D-Caledonia, is the chairwoman of the Senate Appropriations Committee and served as the human services secretary under Gov. Howard Dean. She helped develop the program that led more pregnant women to go on Medicaid to get more services.

Kitchel said she would reserve judgment until she understands how many women are affected and how much money the initiative saves the state. “It’s pretty well known that a good quality comprehensive prenatal care is very important in terms of good birth outcomes, so it’s going to be within that framework that I look at that particular proposal,” she said.

Rep. Jill Krowinski, D-Burlington, works in women’s health outreach. She said she needs a lot more details about the proposed change to eligibility for pregnant women because she wants “to make sure that we are covering and ensuring that every single pregnant woman in the state has access to quality health care. Period.”

House Majority Leader Sarah Copeland-Hanzas, D-Bradford, called the plan to give women access to birth control such as IUDs immediately after childbirth a “fabulous proposal” that Vermont should have done 10 or 20 years ago.

She did not have a firm position on whether the provider tax was a good idea. However, she challenged opponents of raising the tax to say who they would cut from Medicaid if they don’t want to raise taxes.

“We know that Medicaid is growing faster than other areas of state government, but it is absolutely fictional to pretend that you can cut spending in order to fill the growth in Medicaid,” Copeland-Hanzas said.

Shumlin spokesman Scott Coriell defended the proposals. He said VTDigger was “completely misleading” when it reported Thursday afternoon that the change in pregnancy eligibility would mean cutting pregnant women from Medicaid.

Coriell said, “Currently, uninsured women in Vermont who become pregnant have no way to access insurance with federal and state subsidies through the exchange, outside of an enrollment period. The governor’s proposal makes pregnancy a qualifying event so they can sign up.”

Senate Minority Leader Joe Benning, R-Caledonia, said it is “very problematic” that Shumlin questioned the cost of health care in one sentence and a few seconds later proposed raising the provider tax on independent doctors.

“This is literally like deja vu all over again because we keep getting up to this podium at the end of these budget discussions and repeating ad nauseam, and frankly we have to do things to get ourselves self-sustainable,” Benning said.

House Minority Leader Don Turner, R-Milton, agreed. “How can we address the cost, or how do we rein in the spending when we raise a new tax, because we know the consumer is going to pay that,” Turner said.

Turner said his party is looking at whether lowering subsidies or charging premiums would help balance the Medicaid budget.

Rep. Paul Dame, R-Essex Junction, called the new provider tax counterintuitive and mocked that “somehow it’s going to magically all work out once we filter it through that lean, efficient Department of Vermont Health Access.”

Rep. Doug Gage, R-Rutland City, said he “doesn’t see how they’re going to save any money. If anything, they’re going to increase costs of the system.” Gage called universal health care “a black hole that money goes into.”

All-payer model and other reform

Vermont’s efforts at health care reform include a plan to adopt what’s called an all-payer model.

Shumlin said in the speech Thursday that his administration would unveil a draft set of terms next week for a deal with the federal government that would pave the way. The Green Mountain Care Board had expected to present the draft terms last year, then postponed it until the first two weeks of January.

Shumlin is proposing to spend $300,000 in fiscal 2017 to add staff at the Green Mountain Care Board so it can manage the all-payer model.

The model is called all-payer because it has the potential to absorb all the payments made for health care in Vermont.

The regulators want to use a payment structure that encourages keeping people healthy, rather than a fee-for-service system that doesn’t take into account the outcomes of treatment.

These are other health care expenditures the governor is proposing:

Thanks for reporting an error with the story, "Updated: Shumlin eyes Medicaid changes for women, tax on doctors"