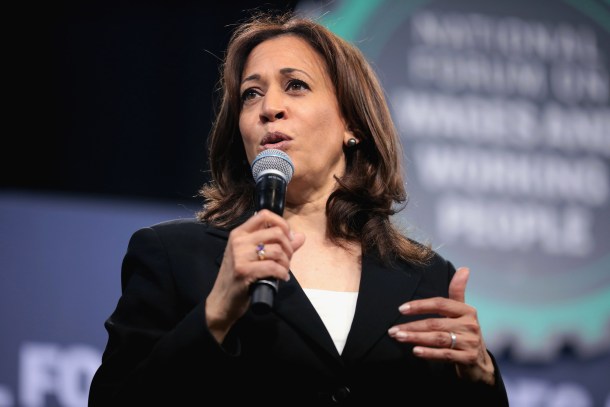 Sen. Kamala Harris speaks at the 2019 National Forum on Wages and Working People in Las Vegas, Nevada, in April. Photo by Gage Skidmore/Flickr

[S]en. Kamala Harris is weighing whether to set up a campaign operation on Sen. Bernie Sanders’ home turf.

The California Democrat plans to send staffers to the Burlington area to test the waters for a “field program” in the Green Mountain State later this month, according to two Democratic sources in Vermont.

The Harris camp has reached out to Vermont supporters, donors and members of the state’s Democratic party about sending a team to Burlington in late July, those sources said.

One Democratic organizer, who has been in direct contact with the Harris campaign about the planned visit, said staffers have been discussing setting up a possible campaign outpost in Burlington.

The Democratic operative added that Harris has the potential to beat Sanders in the Democratic primary and that doing well in Vermont could be a “final blow” to the elder senator.

“Now would be the time to start the organizing work in Vermont to make that happen,” said the source.

In response to a request for comment on the possible presence in Vermont, a Harris campaign spokesperson said: “We are organizing everywhere."

If Harris decides to expand her campaign to Vermont, she would likely be the first Democratic presidential candidate in 2020 to do so. Vermont is seen by many as a lock for Sanders, where he won 86% of the presidential primary vote against Hillary Clinton in 2016.

Vermont is also not a key state in the Democratic presidential contest, with only 16 primary delegates out of 4,690 nationwide.

Sanders already has a strong campaign presence in the state with a team of 24 in a Burlington office that oversees the entire Northeast. The home-state campaign plans to expand its impact across the country by setting up phone banks throughout the state in the coming weeks. 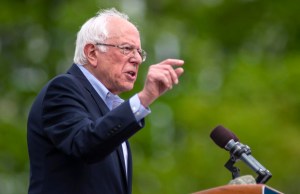 Bernie Sanders speaks at his first rally as a candidate for president in Vermont in Montpelier on May 25. Photo by Glenn Russell/VTDigger

In response to the news that Harris is considering setting up show in Vermont, the Sanders camp said it welcomes the competition.

"Engaging Vermonters should be a priority for every campaign and ours is proud to welcome Senator Harris and her team to the Green Mountain State," said Shannon Jackson, the Northeast Regional Director for the Sanders campaign.

In 2016, presidential candidate Hilary Clinton launched a small campaign operation in Vermont in an attempt to win 15% of the vote — the minimum needed to earn a delegate. However, Clinton never visited the state and only ended up winning 13.6%.

Vermont wasn’t neglected by everyone in the 2016 presidential field. President Donald Trump made a stop in Vermont during the election cycle, giving a stump speech to a crowd of more than 1,000 supporters who packed Burlington’s Flynn Theater while a smaller but equally emotional crowd protested outside.

Kesha Ram, a former Democratic state representative and candidate for lieutenant governor, said she has been in contact with the Harris campaign for the past few months about outreach and a possible visit from the senator.

However, Harris is not the only top contender considering a presence in Vermont.

Warren has also been in talks with party insiders and supporters about putting a campaign together. But there are no imminent plans for her to do so, said one top Democratic organizer.

If Harris goes through with campaigning in or even visiting the state, it would be a clear statement of confidence primary voting days approach.

“It is throwing down the gauntlet,” the source said.

Vermont will vote along with 14 other states on Super Tuesday, which will fall on March 3, 2020, which is also Town Meeting Day.

Thanks for reporting an error with the story, "Kamala Harris considers Vermont campaign presence in challenge to Ber..."