[C]omprising two mobile homes surrounded by a 14-foot fence, the Middlesex Therapeutic Community Residence was never meant to be a long-term place for mental health patients.

Now, officials are running out of time to find a better solution.

The state says the facility is “failing” and “in dire need of replacement.” Lawmakers are concerned about conditions there. And the federal government is threatening to take back $2 million that had been invested in the Middlesex site.

Plans are in the works for a new, 16-bed mental health facility that could cost more than $14 million. That’s at least several years away, but Human Services Secretary Al Gobeille said the project is his agency’s “No. 1 capital priority.”

While much of the conversation about Vermont’s overburdened mental health system is focused on inpatient treatment beds, officials say “intensive residential” facilities like Middlesex also play a critical role: They’re meant as a “step-down” for psychiatric patients who are able to leave the hospital but are not yet ready to be discharged into the community.

There are multiple intensive residential facilities in Vermont, but Middlesex is unique because it’s a “physically secure facility” with a fence and locked doors, Deputy Mental Health Commissioner Mourning Fox said in recent legislative testimony.

To qualify for care at Middlesex, a person must be coming from a psychiatric hospital and must be in the state’s custody under an “order of nonhospitalization.” That order must specify that a patient needs a secure level of care.

Despite those relatively narrow parameters, Middlesex “is almost always full,” Fox said. “We have more referrals than beds.”

Middlesex was built after flooding from Tropical Storm Irene closed the Vermont State Hospital in 2011. It opened in 2013 and was supposed to serve as a stopgap solution for two or three years, officials say.

“We’re well past that, and the facility shows its wear,” Fox told members of the House Corrections and Institutions Committee.

After a recent tour of the facility in Middlesex, members of the House Health Care Committee were less than impressed. Rep. Brian Smith, R-Derby, likened the facility to a “slum” and said “people that are having to stay there deserve better living conditions.”

In an interview, Gobeille acknowledged that Middlesex is “not the proper treatment environment.” He also said it doesn’t have any of the amenities – for example, a kitchen or a laundry facility – that might allow a patient to begin transitioning back to the community.

Middlesex also is too small. Gobeille said a larger facility will allow better “flow in the system,” which could help alleviate pressure on hospital emergency departments that are seeing large numbers of psychiatric patients. 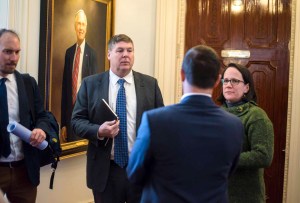 “It basically increases our inventory of available treatment options, which will really help with the issue of emergency overcrowding,” he said.

If the size and condition of Middlesex wasn’t enough to motivate officials to find a replacement, the federal government also is doing its part. The Federal Emergency Management Agency contributed funding for building Middlesex, but that money was “so that we could build a temporary facility,” Gobeille said.

State documents say the Department of Buildings and General Services and the Agency of Human Services have requested that the federal government give Vermont until July 1, 2022 before taking any action on the FEMA funding.

“As long as they see progress, and funding to support that progress, that will help our argument,” said Michael Kuhn, a program chief at Buildings and General Services.

To that end, Gov. Phil Scott’s capital budget request includes a total of $5 million for fiscal years 2020 and 2021 to find and acquire a site; design a new, 16-bed secure residential facility; and begin construction.

Officials said they’re targeting central Vermont but have not yet found a property. “We would like it to be close to (Vermont Psychiatric Care Hospital) because of workforce issues,” Gobeille said. “But ‘close’ hasn’t been defined yet.”

At one point last year, there was a preliminary plan to convert Vermont Psychiatric Care Hospital into a secure residential facility, then close Middlesex. The changes were part of a larger project planned by University of Vermont Health Network to build a new psychiatric inpatient facility at Central Vermont Medical Center.

But federal Medicaid funding limits have since scaled back the UVM Health Network project, and that has scuttled last year’s Middlesex replacement plan.

While some officials characterized that as a setback that delayed the Middlesex project, Gobeille contends that the state “never stopped looking” for a secure residential solution.

It is clear, however, that finding that solution will take some time.

In fact, a project document from Buildings and General Services estimates that it could take five or six years until a new secure residential facility is ready for occupancy. Members of both the Corrections and Institutions and Health Care committees inquired whether that time frame could be shortened.

“We were able to rebuild the state hospital pretty quickly,” said Rep. Brian Cina, P/D-Burlington. “Why is it going to take six years for Middlesex, and is there any way we can put some pressure on to speed that process?”

Gobeille said part of the reason Middlesex hasn’t been replaced already is the sheer number of building projects the state had to undertake in the aftermath of Irene. “We just put 150 employees back into the Waterbury complex from Williston who were in temporary offices,” he said. “So, this is really just us still recovering from (Irene).”

Thanks for reporting an error with the story, "State seeks replacement of ‘failing’ mental health facili..."