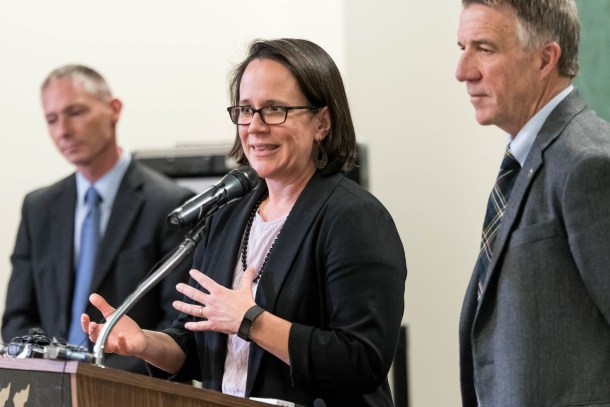 [A]gency of Natural Resources Secretary Julie Moore on Thursday offered senators her justifications for failing to finalize a “three-acre” pollution-control rule that was required of her by the end of last year.

The rule is supposed to require pollution control for large developments with parking lots and other impervious surfaces in excess of three acres.

Members of the Senate Committee on Natural Resources and Energy grilled Moore in relation to a bill titled H.576, which demands that Moore file a preliminary draft of the rule by the end of this week. It also censures her agency for its illegal inactivity.

“ANR’s failure to adopt the three-acre permit and its failure to comply with statutory requirements are not accepted by the [Legislature] and the citizens of Vermont,” bill H.576 states.

Moore and other members of Gov. Phil Scott’s administration have missed numerous legal deadlines for environmental rules meant to curb the state’s water pollution. Moore said she meant no disrespect to the legislative body that set those deadlines.

“It was not an attempt to undermine the directive from the Legislature, but mostly to recognize that these projects, as I said at the outset, are complicated and expensive, and to my mind some of the options of last resort, and we want to make sure that we have a rule package that does the job we need to do,” Moore said.

The rule had been in the works for three years and was in its final stages when Moore blocked its release in October 2017.

That move had nothing to do with political pressure from the developers who would be affected, Moore told the committee, though she said one of her reservations about the rule was the impact it would have on those developers.

Asked by committee chairman Sen. Chris Bray, D-Addison, whether anything had actually prevented her from meeting the rule’s Dec. 31, 2017, statutory deadline, Moore said there wasn’t. 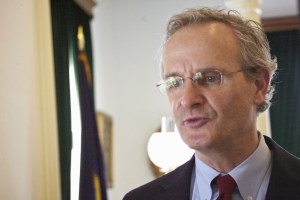 “We were looking for additional clarity,” she said, “but at its most fundamental level, probably not.”

The rule would have required large developers with parking lots of at least three acres to control pollution carried by stormwater runoff. Business groups representing those developers, including the Vermont Chamber of Commerce, have opposed the rule because of potential costs to landowners.

The three-acre rule is one of several “reasonable assurances” Vermont promised to undertake in 2016, as part of a federal order that requires the state to dramatically cut the rate at which it pollutes Lake Champlain with phosphorus. That order, called a Total Maximum Daily Load, or TMDL, specifies how much Vermont must cut its water pollution in order to come into compliance with federal clean water laws.

Farms are the primary source of phosphorus pollution in Vermont, but pavement and other surfaces impervious to water are among the top contributors. Phosphorus is a naturally occurring element that in excessive quantities drives toxic, blue-green bacterial outbreaks during summer months in Lake Champlain, Lake Carmi and other Vermont public waters.

The Environmental Protection Agency’s order required reasonable pollution-control assurances in order to demonstrate that Vermont would follow through on its legal obligation to reduce its rate of water pollution.

Moore and a group of Scott’s administrators last year refused to fulfill another of those assurances when they failed to identify a long-term funding source for the pollution-control effort. They instead produced a report arguing that new taxes or fees were not needed in the short term.

Moore affirmed to the committee Thursday her commitment to fulfilling the TMDL’s obligations.

Sen. Chris Pearson, P/D-Chittenden, said Moore’s explanation didn’t add up, and that she appears to be flouting the law intentionally. 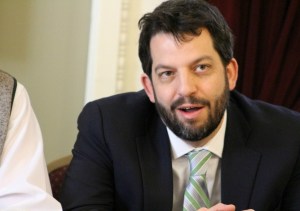 “In October, when you yanked this rule from the process, you knew you were missing the deadline that’s part of the TMDL — you knew that,” Pearson said. “You knew that when we didn’t have a reliable, ongoing funding source identified, that we were missing an obligation that we had agreed to.

“I know you know what the TMDL demanded of you as of the end of December ‘17. I’d like to understand how people in the room got comfortable with blowing by those deadlines,” he said.

“I wouldn’t say we were comfortable with blowing by those deadlines,” Moore replied. “I’d say that the overarching consideration in all of that was doing the job right.”

Scott said this week that he opposes S. 260, a bill through which lawmakers hope to make a second go at identifying a dedicated funding source for the hundreds of millions of dollars Vermonters will need to pay over the next 20 years to bring state public waters into compliance with state and federal water quality laws.

The governor says he opposed to the bill because it calls for a study into the creation of a clean water funding mechanism, which goes against his pledge not to approve any new fees or taxes.

Thanks for reporting an error with the story, "Facing legal censure, Natural Resources secretary defends inaction"