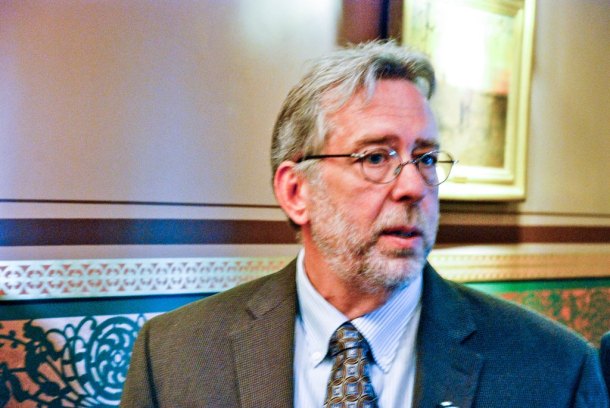 [E]nvironmentalists are disappointed with Gov. Phil Scott’s budget. They say that while it may accomplish a political goal for the governor, who has promised not to increase taxes or fees, the savings will come at the expense of Vermont’s environment and water quality.

“It lacked ambition,” Brian Shupe, executive director of the Vermont Natural Resources Council. “It lacked detail. With respect to climate and water quality, it’s inadequate to address the reality of the situation. It falls far short of what we need in terms of leadership.”

Lauren Hierl, political director for Vermont Conservation Voters, said the budget proposal included “nothing that’s innovative or commensurate with the scale of our climate and clean water challenges."

Among the urgent matters Scott appears to have kicked down the road is funding the more than $1 billion in estimated costs of cleaning Vermont’s public waters, notably Lake Champlain.

This is not the first time the Scott administration has managed to ignore matters of funding for reducing pollution, environmentalists say. They go so far as to say that Julie Moore, head of the Agency of Natural Resources, violated state law last year when she failed to identify long-term funding sources for pollution reduction in Vermont’s public waters. Moore said at the time that in the short term -- through the year 2022 -- new taxes or fees would not be necessary.

While Scott did make reference, in his budget address, to the problem of the billion dollar price tag, environmentalists were particularly scathing of his proposed solution -- to remove the excess phosphorus from Vermont’s public waters, and sell it.

“This is the kind of creative thinking we need to solve the problem,” Scott said.

“Polluting our lakes and then selling the pollution out of them is not a good plan for cleaning up our waters,” he said.

Jared Carpenter, an attorney and clean-water advocate for the Lake Champlain Committee, put it another way. “I don’t think I’ll retire,” he said.

While it is true that methods have been developed for scrubbing phosphorus, the technology has proven effective and cost-efficient only in treating sludge from municipal wastewater treatment plants. The city of Chicago recently spent $31 million on just such an upgrade to its sewage treatment system. The city hopes to raise $2 million a year by selling the phosphorus removed from its municipal wastewater.

The major source of phosphorus polluting Vermont’s waters, however, is farm runoff.

The combined wastewater from treatment plants in Quebec, New York and Vermont contribute only about 7 percent of the phosphorus that is polluting Lake Champlain. Vermont’s farms contribute about a third.

While it is not impossible to remove phosphorus from polluted water, the cost is such that it is not worth the effort, according to a study cited recently by the United Nations Educational, Scientific and Cultural Organization (UNESCO) in a 2017 report on the subject.

Further, there’s not much of a market for the chemical. Phosphorus is mined; there are phosphorus mines around the globe. And mining the ore from the ground is much cheaper than reclaiming it from polluted water.

“With the exception of a few local cases, there currently exist no financially attractive phosphorus recovery technology that can compete with phosphate ore based fertilizers,” the UNESCO report says.

At a time when the federal Environmental Protection Agency is being retooled to better serve business owners, environmentalists say, states must step up to fill the gap in environmental protections. Scott’s budget doesn’t do this.

There’s nothing in the budget that indicates a sense of urgency about resolving the problems, either, said James Ehlers, executive director of water-advocacy group Lake Champlain International, and a possible Democratic gubernatorial candidate. He said expecting Vermonters to pay for water pollution cleanup efforts amounts to a subsidy of the dairy industry and others.

“I expect [Ben & Jerry’s corporate parent] Unilever and Monsanto and other industrial polluters are quite pleased with his unwillingness to act, and to accept responsibility for a job he signed up for,” Ehlers said.

But this sort of talk does give Scott the appearance of contending with issues that many Vermonters take very seriously, said Ben Walsh, climate and energy program director at Vermont Public Interest Research Group.

“This is what we’ve seen over and over again,” Walsh said. “Lip service, and when push comes to shove he’s not walking the walk.”

Senators are hoping to pick up the slack, said Sen. Chris Bray, D-Addison, who chairs the Senate Natural Resources and Energy Committee.

The committee aims to have a bill out within three weeks that will fund a statewide clean water authority, Bray said. The legislation, S.260, would require every Vermonter who owns property to pay a fee toward covering the damage caused by farming, paving, developments, municipal roads and forestry practices on the state’s public waters.

The proposed law would also establish a surcharge on parcels that have an adverse impact on water quality, including commercial properties with large parking lots and farms that are releasing phosphorus into the waters of the state. Parking lots are, after farms, one of the largest contributors of phosphorus. Such a surcharge would be made possible with newly developed imaging technology.

"One of the basics of environmental law,” said Bray, “is that polluters pay for the cost of fixing the damages they cause."

Excess phosphorus from farms caused a 2,000-square-mile cyanobacteria bloom in 2014 that closed Toledo’s public water supply for days. Exposure to toxins from the photosynthesizing bacteria can be fatal for pets, and cause illness in humans.

Because public health is one of the most important services that citizens entrust to their governments, it’s “intolerable” that Scott refuses to act, Bray said. Nor should Vermonters accept worsening, statewide damage to their natural environment, he said.

“Water quality ... is one of the most fundamental things -- literally -- to a healthy environment, and we’re failing on water quality,” Bray said.

“It’s a profound problem to have a continuing decrease in water quality,” Bray said. It will be the goal of his committee "to change the course the state’s on,” he said. “We can’t settle for business as usual.”

Thanks for reporting an error with the story, "Scott’s solution to pollution is ‘gimmickry,’ critics say"