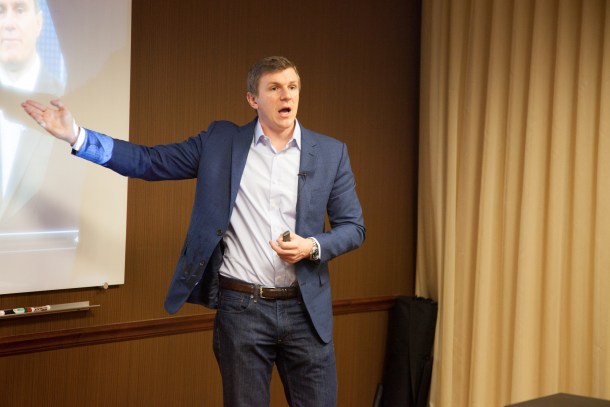 [I]f James O’Keefe was looking for controversy in Middlebury, he didn’t find it.

The last time a controversial conservative speaker came to Middlebury in February — “The Bell Curve” author Charles Murray — the campus was forced into the national spotlight, and 74 students were disciplined, many for participating in a disruptive protest that left one Middlebury professor with a concussion.

O’Keefe's talk, "Middlebury's Problem With Free Speech," was announced Tuesday via a mass email to the student body from a purported student group called The Preservation Society — an apparent front group promoting the Project Veritas talk, according to an email from Middlebury officials.

Bill Burger, spokesman for Middlebury College, wrote that the college had "nothing to do with this event.”

“Mr. O’Keefe has chosen to travel to town to pursue his own political and personal agenda," Burger wrote. "We also are unaware of any student group called The Preservation Society, which was named in the email as a host for the event.”

Sarah Ray, a college spokeswoman, says it is unclear who is behind The Preservation Society’s email.

“It’s not confirmed if it was O’Keefe’s organization, or another organization or individual working on his behalf,” Ray said.

After the email made it past Middlebury’s spam filters, the college temporarily shut down its public directory.

The Middlebury College Republicans, one of the student groups that invited Murray to campus, denounced O’Keefe and the methods he used to publicize the event.

“Non-college groups are advancing their political agenda by using Middlebury as a location for publicity reasons,” the college group wrote.

The organization has been roundly criticized since its founding for selectively editing video, and has been in the news this past week after The Washington Post foiled an apparent Project Veritas operation to plant fake news in the Post.

O’Keefe was in Dallas the previous night giving a similar talk at Southern Methodist University. He arrived at the Marriott Thursday with a small entourage, that helped him with bags and set up the presentation equipment in a conference space. Books on former President Ronald Reagan, copies of “The Truth about Gun Control,” pins that read “Free Speech is LIT,” were displayed top of a “Don’t Tread on Me” Gadsden flag.

Security was tight, and tight-lipped. Shortly after O’Keefe arrived, two Middlebury police officers came with a police dog and swept the building. They were observed meeting with O’Keefe’s group upon arrival, but declined to answer questions about what the dog was searching for and whether they came to the event at O’Keefe’s request.

A hotel manager watched the door to the event space and kept the door locked. About 40 people attended. A dozen were members of the media.

A two-man detail accompanying O’Keefe would not say whether they worked for O’Keefe or the Marriott, and wouldn’t identify the security company they work for. When O’Keefe finished his talk, they stood guard outside his hotel room door.

Hayden Smith, a Middlebury sophomore, was one of the first to arrive.

The neuroscience major said the campus changed after the Charles Murray event. “It shut down. Nobody could talk about politics, and that’s not fair,” Smith said. “I think we need intellectual discussion.”

Darren Donovan, a Vergennes resident, drove out to see O’Keefe speak. Donovan described himself as a free speech advocate, but said he doesn’t necessarily see eye to eye with O’Keefe.

“I support the idea of free speech, but I don’t agree with many of his opinions,” Donovan said.

He detailed self-described “undercover journalism” investigations he and Project Veritas operatives had undertaken. Over the years, O’Keefe and his group have targeted ACORN, a long-running community organizing nonprofit, National Public Radio and Hillary Clinton’s 2016 presidential campaign.

In response to criticism that Project Veritas videos are edited to distort the truth, O’Keefe said that all journalists selectively edit their work.

“All you reporters back there, are you going to publish copies of your notebooks?” O’Keefe said.

The undercover videos are necessary, he said, because it is the only way to get powerful people to reveal their true feelings and motivations.

“It’s not about techniques, or journalism ethics, it’s about power,” O’Keefe said.

The right-wing provocateur was paid “a few thousand dollars” to give the Middlebury talk by a Virginia-based conservative training institute called The Leadership Institute.

O’Keefe said that he has the resources to continue his work, despite recent embarrassing press in The Washington Post.

“The only way they’re going to stop me is to kill me,” O’Keefe said.

About an hour before the event started, the Post reported that the New York attorney general may strip Project Veritas of its nonprofit registration because the organization failed to disclose that O’Keefe has a criminal record.

Hear audio and analysis from the event on this week's Deeper Dig podcast.

Thanks for reporting an error with the story, "Fake student group promoted O’Keefe talk in Middlebury"