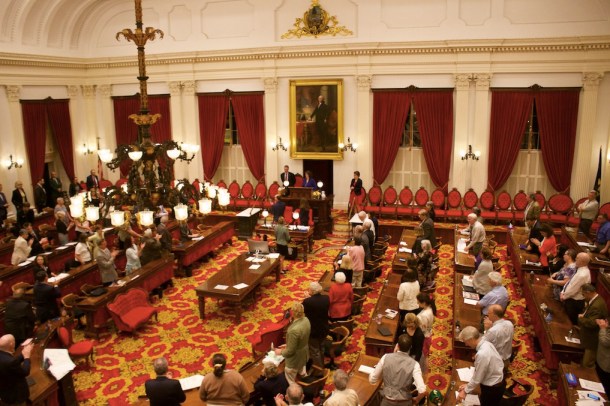 But they will likely be back again in a matter of weeks.

Lawmakers left the capital without reaching a resolution with the governor over his proposal to shift teachers’ health care benefits negotiations from the local to the statewide level.

Gov. Phil Scott has repeatedly said that if lawmakers failed to pass a plan that meets his requirements, which he says could net up to $26 million annually in savings, he would veto the state budget.

House Republicans have vowed to sustain Scott’s veto. They hold 53 seats in the 150-member chamber, enough to back Scott. It takes a two-thirds vote to override a veto.

Minutes after the House passed the final bills of the year — including a legislative response to Scott’s proposal — the governor made good on his threat. He reiterated that he believes policymakers have an “obligation to taxpayers” to ensure that the state nets as much in savings from teachers’ health care as possible.

“That has not yet been accomplished, therefore I regrettably cannot support the budget or the yield bill,” he said.

“But please understand this. It gives me no satisfaction to say that,” Scott said. “I truly, truly believe we can find common ground.”

The mood was cordial. When a group of lawmakers escorted Scott to the chamber, there were handshakes and smiles. After his speech, he received a standing ovation. But before lawmakers left for the night, they scheduled June 21 and 22 for the dates they will return for a special session once Scott makes a budget veto official.

After weeks of closed-door meetings to try to find a meeting point on the teachers’ health care issue, House Speaker Mitzi Johnson, D-South Hero, and President Pro Tem Tim Ashe, D/P-Chittenden, declared an impasse Wednesday. They indicated they would proceed to wrap up the rest of the legislative business, including passing a budget, and move toward adjournment.

Despite the declaration, meetings between the administration and legislative leaders continued through most of Thursday. Ashe and Johnson walked in and out of the governor’s office. There were no press conferences, and no information released about what they were or were not considering. At times there were whispers around the building that the three parties were nearing an agreement.

By dinnertime, though, with hopes for consensus dashed, the Legislature began to move forward without a deal with Scott. 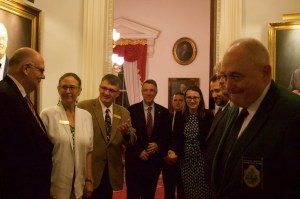 Sen. Dick Mazza, D-Grand Isle, a friend of Scott’s and an ally of Ashe, said he sat in on five hours of negotiations between the leaders of the Senate and the House and the governor Thursday.

“I just thought there was a possibility that maybe we all could all walk away with something and agree,” Mazza said. “I guess I’m satisfied now that at least it’s exhausted.”

The six members of the budget conference committee signed the bill setting the state’s finance package for the next fiscal year, signaling that the Legislature would begin the final steps before adjournment.

While cogs began to turn to move the final bills of the year through the process, outside dozens of lawmakers enjoyed a tripartisan moment of unity, watching a summer thunderstorm roll into town.

As discussions with Scott broke down, the House and Senate members of the conference committee for the education tax bill, H.509, agreed to a proposal that will require all teachers’ health care benefits that have not been settled by July 1 to expire in September 2019, giving lawmakers another chance to examine the issue.

The idea first came up earlier in the day, when Ashe told reporters that in discussions with the governor, they talked about asking school boards and teachers to negotiate contracts with the same end dates to try to re-create what Scott has called a “once-in-a-lifetime situation” because all the teachers’ plans are expire Jan. 1.

Officials estimate teachers’ health care plans will cost $75 million less by moving to plans with health savings accounts. Scott’s plan was to give back $49 million of the savings to teachers to cover most of their out-of-pocket expenses. The $26 million in savings would either be used for property tax reform or to fund other programs.

Democrats and unions cried foul that Scott’s proposal would disrupt collective bargaining with local school districts. According to Speaker Johnson, Scott also sought to put some limits on what teachers could receive in raises so to not lose the savings achieved in health care, a claim Scott’s administration disputes.

Democratic leaders put forward plans that essentially would have mandated local communities find specific savings but keep the bargaining at the local level. Scott rejected them because he didn’t think they would achieve maximum savings.

Some lawmakers complained Scott’s plan to capture the savings from moving to less expensive plans was brought up late in the session. Ashe said re-creating the same end dates in the future could give a study panel time to more fully vet the idea.

Many Republicans in the Legislature were dismayed by the last-minute proposal and by the failure for a deal to be brokered.

Minority Leader Don Turner, R-Milton, told his caucus that “a lot of people are very disappointed that we couldn’t get this resolved.”

He reaffirmed the House Republican Caucus’ backing for Scott.

“We are not going to achieve the savings. We have to support the governor,” he said.

“We had an opportunity and this was our only opportunity. Yes, it came later [in the session], but it was still there. We should have been able to do this for the taxpayers of Vermont and the school board members,” Rep. Heidi Scheuermann, R-Stowe, said,

On the Senate floor, Sen. Ann Cummings, D-Washington, chair of the Senate Finance Committee, said the proposal came after lengthy discussions with the governor.

“We failed to reach accord, but we’ve come close,” Cummings said.

Senate Republicans raised concerns about the proposal, asking questions of whether the model will yield any assured savings to school districts.

The Senate adopted the proposal on a vote of 20 to 8.

Rep. Kurt Wright, R-Burlington, expressed disappointment in the Legislature’s answer to Scott’s proposal, and said it does not do enough to relieve property tax payers.

Wright said he believes the leadership’s proposal will leave Vermonters wondering, “Where are the real savings?”

Sharpe applauded the efforts of the speaker to reach a compromise.

After the education finance bill passed each body, attention turned to the proposal for a $5.83 billion state budget package for the next fiscal year.

In both bodies, versions of the budget passed with unprecedented levels of support. But the controversy surrounding the governor’s teachers’ health care proposal atrophied the votes in favor of the bill, H.518.

In the Senate, where the budget won unanimous support last month, the final version of the bill received a vote of 22 to 6.

Several Senate Republicans stood to say that though they would not vote in favor of the budget because of the lack of a deal on the teachers’ health care issue, they continue to support the bill itself.

“I just want to say that even though tonight I may be voting no, there’s nothing in this budget I disagree with,” Sen. Kevin Mullin, R-Rutland, said.

In the House, where the budget bill had just one dissenting vote in March, Republicans also held firm in their support for Scott. House Republicans hold enough seats to sustain a veto, and have vowed to do so in support of the governor on this issue.

“This is a good budget, but unfortunately, it leaves too much money on the table for us to support,” Turner said.

Rep. Kitty Toll, D-Danville, chair of the House Appropriations Committee, urged her colleagues to view the budget proposal on its own, not in the context of other.

“This is a budget that has been widely embraced and it should be supported on its merits,” she said.

The next step is in the governor’s hands.
/

Thanks for reporting an error with the story, "Legislature adjourns facing budget veto by Gov. Scott"

John Killacky: Mother’s Day elegy — ‘You gave me so much’