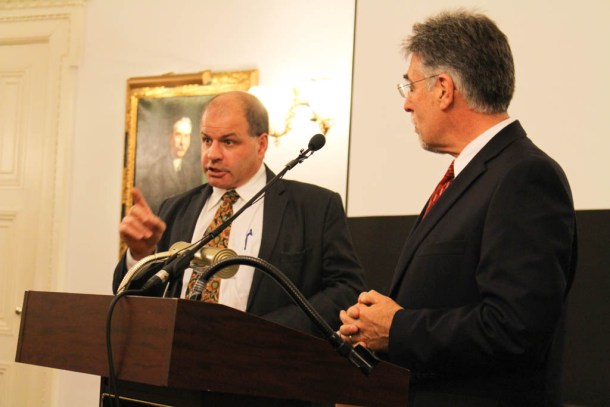 [G]ov. Peter Shumlin’s chief of health care reform testified Wednesday in the House and challenged the veracity of a VTDigger story that said the state has been unhappy with its current Vermont Health Connect contractor and is negotiating with another company.

Lawrence Miller, the chief of health care reform, told lawmakers the state’s former implementation expert on the exchange was not a “top official” and that any frustration he expressed in emails was a normal part of negotiations.

“I think it’s important to remember that our procurement and contract management processes are by design adversarial,” Miller told the House Health Care Committee. “We’re working hard to get the best damn deal for Vermont in every case, and in so doing, there is friction.”

“There is also a need for a highly collaborative environment in performing that work,” he said. “These are not in conflict. These are a normal aspect of the dynamic tension that you see in project management.”

VTDigger reported Sunday that Justin Tease, who left his job at the Department of Vermont Health Access on April 1, was hesitant to sign a reference for OptumInsight Inc., the lead contractor on Vermont Health Connect.

In a Feb. 16 email cited in Sunday’s story, Tease wrote: “I disagree with, ‘Optum has successfully delivered on contractual obligations in a quality manner, by the identified due date, and within the agreed-upon budget.’ There’s a nuance of reality that is lost by this sentence.”

On Wednesday, Miller read the dictionary definition of “nuance” to the committee and said, “I think that to say that a vendor who has put what they have on the table, I don’t think global frustration is an appropriate expression.”

In another email sent about a half-hour after the other Feb. 16 email, which is not included in the Sunday article, Tease said: “No way I’m signing this. … Let’s see what Lawrence says.”

Optum’s performance came under similar scrutiny in April 2015, after Shumlin said the company “has not only delivered earlier on all the challenges they’ve been facing and tech they’ve been developing, but they’ve also done it for less money in every case.”

Public records obtained from Vermonters for Health Care Freedom, a staunch critic of the Shumlin administration, revealed that the majority of work orders that Optum completed at the time were over budget, by more than $150,000 total.

The Legislature gave the department the power to make emergency rules in 2014 in order to comply with the Affordable Care Act and implement Vermont Health Connect. The power allows the department to bypass certain public notice procedures, among other things.

The emergency authority was scheduled to expire June 30. But the House inserted language into the budget bill, H.875, to extend the Agency of Human Services’ authority to make emergency rules through June 30, 2017.

The Senate then took the language out of the budget bill. In conference committee, the House is now proposing to extend emergency rule-making powers through June 30, 2017, “but only in the event that new federal guidance or regulations require Vermont” to change rules.

“We don’t think they need it anymore,” said Cory Gustafson, a lobbyist for Blue Cross. “The exchange has been around since 2014. We think that the public process that’s part of full rule-making is productive, transparent and appropriate.”

The department said in a statement: “While this authority is rarely used, it is critical in ensuring that DVHA’s administrative rules are in compliance with federal regulation,” and without the authority, the department would be at “unnecessary risk for state and federal audits and financial penalties for lack of compliance.”

Thanks for reporting an error with the story, "Top official says state not frustrated with exchange contractor"