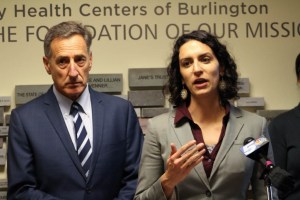 [S]tate officials are frustrated with the current Vermont Health Connect contractor and have been negotiating with another company that wants to stabilize the exchange, documents show.

Internal communications at the Department of Vermont Health Access in February show that top officials were hesitant to sign a reference letter for OptumInsight Inc., the current contractor on Vermont’s health exchange.

Justin Tease, who left his post as an implementation expert for Vermont Health Connect, wrote Feb. 16 he disagreed with the statement “Optum has successfully delivered contractual obligations in a quality manner, by the identified due date, and within the agreed-upon budget.”

On Feb. 18, he told colleagues that Optum “is not planning to be capable of supporting” a specific feature of Vermont Health Connect through a maintenance and operations contract.

On March 9, Tease wrote that the team asked Optum to perform a task but “They don’t/didn’t have the business insight to do it in a meaningful way. We didn’t get a cost estimate from them.”

In a Feb. 10 document released under a similar public records request, Optum wrote that software called OneGate — which the state is now seeking to detach from Vermont Health Connect — had 145 “issues,” and 70 had been “remediated.”

The state of Vermont said on March 30 that it intended to remove OneGate from Vermont Health Connect in order to make the system more stable. Speridian Technologies Inc. has proposed to do the work to detach OneGate for the state of Vermont, documents say.

The Shumlin administration released the documents to VTDigger following a March 24 request under the Vermont Public Records Act. The Department of Vermont Health Access and the Agency of Human Services both sought 10-day extensions in accordance with the law.

The Agency of Human Services released the record and then billed VTDigger $236 for the records. The Department of Vermont Health Access requested $162.

Upon receiving the money, the department declined the public records request. The department did not release the emails until VTDigger said it would publish a story describing officials' “unwillingness to comply with Vermont law.”

Additionally, both the Department of Vermont Health Access and the Agency of Human Services declined to release any communication regarding Speridian Technologies Inc. under the Vermont Public Records Act, saying that any documentation regarding the company was related to contract negotiations.

Cassandra Gekas, the director of operations for Vermont Health Connect, said Wednesday she did not see “anything more than day-to-day, run-of-the-mill banter about contractors” in the emails released through a public records request.

Gekas said it doesn’t “work well” to assess the state’s relationship with Optum from a single email. “There’s always going to be tension in big tech projects,” she said. “People are people and some days are just more frustrating than others.”

Sean Sheehan, the spokesperson for Vermont Health Connect, said the state is not allowed to endorse contractors but can verify that a company did work and did it satisfactorily. He said Vermont provided that type of reference verification and is willing to do it again in the future.

Additionally, Matthew Stearn, a spokesperson for Optum, said the company has bid on the new maintenance and operations contract for Vermont Health Connect. He said the company is “honored” to work with Vermont and will continue.

“The project definitely had its complexities, but the fact is that Vermont Health Connect worked as intended during open enrollment, and I think that’s an indication of the strength of our partnership with the state,” he said.

Speridian has partnered with Archetype, a company that absorbed employees from the now-defunct Exeter Group. The two companies have proposed a six-month process to triage and fix issues with Vermont Health Connect. Optum would continue to provide maintenance and operations support while Speridian and Archetype are fixing the system.

Internal documents also show that Vermont is considering Speridian for a no-bid contract because the company is a “proven vendor.” State officials say Hawaii used Speridian to remove OneGate software from the state's dysfunctional health exchange in order to set up an integrated eligibility system.

The public information officer for the Hawaii Department of Human Services said that Speridian was a subcontractor for a company called KPMG, not the main contractor on the project. A Hawaii spokesperson was not available for an interview this week.

"Archetype was approached to evaluate an opportunity to partner with Speridian related to work for VHC," said Jason Webster, the president and CEO of Archetype. "However, after careful consideration, we decided not to move forward with any formal agreement with Speridian at that time."

"Archetype was and always will be open to partnering with other firms if VHC requests that of us, and we are capable of successfully executing the request," Webster said. "Moreover, Archetype is very grateful for the opportunity we have had to serve the State of Vermont and hope to continue serving at the pleasure of VHC leadership."

The House Health Care Committee, which has taken testimony on Vermont Health Connect almost every Wednesday morning during the legislative session, has not scheduled testimony from the Shumlin administration for two weeks.

The House is planning to adjourn by May 7. Gekas said the Vermont Health Connect team is always “on call” for the Wednesday meetings and happy to provide updates on the exchange.

Thanks for reporting an error with the story, "State officials frustrated with Vermont Health Connect contractor"