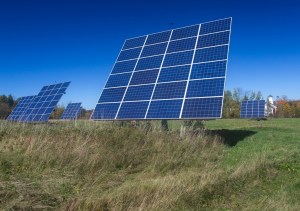 The state’s solar siting task force is calling for more local control over where and how such projects are built but would accomplish that through incentives and regulations rather than local veto power.

The task force delivered its recommendations to the Legislature on Friday. Lawmakers hope to incorporate them into S.230, a bill being crafted largely as a means to put the task force’s proposals into effect.

But S.230 should give localities comfort in addressing very legitimate concerns over the way in which projects are sited, Bray said.

Advocates of local control have long called for municipalities to be given the power to nix projects. The recommended siting standards should address these concerns, task force member Adam Lougee said.

The lack of sufficient empowerment at the local level “has made every suggestion sound reasonable,” he said, including calls to let towns block renewable energy developments altogether.

Critics of existing solar development policies have also called for the state to evaluate renewable energy projects under land use criteria from Act 250, instead of Section 248.

This was discussed at some length, said task force member Sam Swanson, and the panel’s consensus was that legislators should keep the existing review standards.

The Public Service Board, empowered under Section 248 to hold the ultimate say over renewable energy projects’ approval, is needed “to keep an eye on the big picture” and to make difficult decisions in line with state goals that officials applying Act 250 might not, he said.

Swanson said he appreciates the concerns raised over the aesthetics of solar developments and that it’s one reason it’s important to give local governments more say in where and how they’re built.

“Solar has a light footprint, but it uses up a lot of land,” he said. “At 7 acres a megawatt, that adds up, and I’ve heard communities say the decision process up to now hasn’t respected the scale.”

An energy siting commission in 2012 recommended the regional commissions conduct energy planning, and the Public Service Department undertook a pilot project with three commissions to do so in response.

“The sense of the task force is that that planning at the regional level and at the town level, when done well, can and should inform siting decisions made by the Public Service Board,” he said. Copans participated in the task force as one of two staffers assigned to the project.

The state must also develop plain-language aesthetic guidance so developers can easily understand the expectations for energy projects in Vermont, the recommendations say.

The task force also recommends regulatory and financial incentives to put energy generating facilities in preferred locations. These locations include places that towns designate as ideal, and sites that are disturbed already, such as landfills, parking lots and gravel pits.

The recommendations also encourage creation of several new customer assistance roles with the Public Service Board to provide administrative support to help members of the public communicate with the board.

Developers should consult towns and residents before submitting applications, and a formal process for accomplishing this is one of the task force’s recommendations. Once developers have entered the application process, according to the task force, avenues need to be laid out to steer intractable conflicts into mediation.

Thanks for reporting an error with the story, "Solar task force: Use tools short of veto to bolster local control"