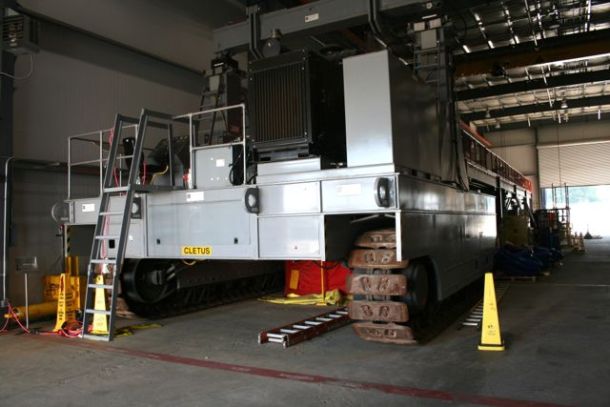 If a state permitting process goes as expected, crews will start transferring the Vernon plant’s spent fuel to dry cask storage in 2017 – two years earlier than initially planned. Entergy announced the decision Wednesday but had first disclosed consideration of a schedule change in an October regulatory filing.

The schedule change doesn’t mean the job will be any less expensive or completed any sooner than the original 2020 deadline. But the early start gives Entergy administrators and a contractor more time to get through the painstakingly slow, closely monitored transfer of radioactive material, according to Chris Wamser, Vermont Yankee’s site vice president.

“It is a methodical, careful process,” Wamser said.

Entergy stopped producing power at Vermont Yankee nearly a year ago. While decommissioning may take up to 60 years under the federally sanctioned SAFSTOR program, moving the plant’s spent fuel into dry cask storage is an important early goal in that process.

Entergy already maintains one spent fuel pad holding 13 dry casks filled with 884 spent fuel assemblies at the site, which is located on the banks of the Connecticut River. The company filled the casks in three separate moving campaigns in 2008, 2011 and 2012.

But most of Yankee’s spent fuel – 2,996 assemblies – remains in a cooling pool inside the plant’s reactor building. Entergy will need a total of 58 casks to hold all of the site’s fuel, and the company is seeking a state certificate of public good to construct a second spent fuel pad adjacent to the original holding area.

Entergy is hoping for state approval by spring 2016 and completion of the second pad in 2017.

Now, Entergy wants to begin moving fuel into new dry casks in the same year, and some of the plant’s fuel will be moved onto the existing pad, Wamser said.

The company had to make a number of logistical changes for the schedule to work. First, Entergy ensured that the cask manufacturer – Florida-based Holtec International – could deliver storage equipment sooner than originally expected. Holtec also committed to sending “qualified personnel” to Vermont Yankee starting in 2017.

That’s necessary because Holtec “will be providing the labor to actually load the casks,” Wamser said. The company also will build the second pad.

Holtec has agreed to a “fixed-price” contract with Entergy, Wamser said.

Entergy has obtained a $145 million line of credit for the project. The company’s decision to borrow money for the dry cask storage means the trust fund won’t be tapped for the cost of the Holtec casks and the second pad, as well as the cost of transferring the fuel.

“We’re sensitive to the stakeholder concerns in connection with the decommissioning trust fund,” Wamser said.

Entergy expects to tap into the plant’s decommissioning trust fund to cover long-term fuel-management costs at the plant, and Vermont officials have objected to federal approval of that plan.

The estimated cost of decommissioning the plant is $1.2 billion.

Eventually, Entergy plans to seek recovery of the $145 million expenditure on the transfer of radioactive material by suing the U.S. Department of Energy for breaching its contract to provide a national repository for spent nuclear fuel. That means radioactive material will remain at the Yankee property for the long term, though current federal projections indicate the fuel could be removed by 2052.

There are shorter-term worries about Vermont Yankee’s spent fuel, as some have questioned the safety of the transfer process and have noted the proximity of Vernon Elementary School across the street from the plant. In the wake of Entergy’s announcement Wednesday, Wamser cited “very detailed procedures” for the transfer of nuclear fuel.

He said the dry casks have been rigorously tested and have received Nuclear Regulatory Commission approval, with “very specific training and qualifications” required for moving them. Even the job of welding the casks shut “is an extremely specialized skill with high inspection requirements,” Wamser said.

And, as Entergy’s schedule change seems to indicate, speed is not a part of the fuel-transfer process. Wamser said it takes about a week to complete one cask, and that includes the container’s short trip to the storage pad via a hulking, tracked vehicle nicknamed “Cletus.”

“Although a very large piece of equipment, it is slow as molasses,” Wamser said.

He declined to disclose any plans for heightened security during fuel transfer. But the plant’s security force remains in place post-shutdown, and Wamser said “the security is here to protect the fuel.”

“Regardless of whether the fuel is in the pool, in transit or on the pad, we have a very robust security posture at all times,” he said.

Thanks for reporting an error with the story, "Vermont Yankee fuel move to start in 2017"