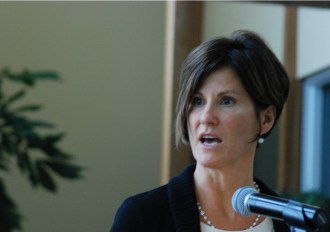 ST. ALBANS — Green Mountain Power announced Tuesday that in concert with three St. Albans farmers they’ll convert cow manure into electricity, and in so doing meet a third of the phosphorus-reduction goals recently set by the Environmental Protection Agency.

The project, “a community digester,” will generate enough power for 700 homes, according to Mary Powell, the president and CEO of Green Mountain Power.

The cow manure conversion system will generate electricity for St. Albans, protecting the community against power outages that could disrupt the larger grid system, Powell said at a press conference.

Stan Dukas, a selectboard member for St. Albans Town, said local officials did not initially support the digester, but on Monday night, after learning more about the collaboration between the utility and farmers, the selectboard decided to endorse the project.

“Here we have a company that wants to invest in our lake, and clean up our lake, without going to taxpayers,” he said to a group of reporters gathered Tuesday morning at St. Albans Bay Park. “Why wouldn’t we want to do this?”

Paul Bourbeau, one of three farmers involved in the project, said he had attempted to get similar projects in motion 20 years ago, and again 12 years ago, but without success.

Green Mountain Power approached him and others last year to get the project underway, Bourbeau said. He and fellow farmers welcomed the initiative.

“We live here, we drive by here, this is home to us,” he said. “We’re members of the community. We’re very aware of what’s going on, and the stresses to the environment, and we want to be part of the solution.”

The digester will reduce greenhouse gas emissions by an amount equivalent to removing 1,300 cars from Vermont roads every year, Powell said.

The community digester works by converting cow manure into methane through the use of bacteria and sustained heat. That methane is then used to generate electricity.

In the process, much of the phosphorus is removed from the solid matter, according to GMP documents.

Manure is a leading cause of phosphorus pollution in Lake Champlain. Excess levels of the nutriet are causing algae blooms that release toxins. The Environmental Protection Agency has established maximum limits on daily amounts of the nutrient that the lake can absorb.

The threat to public health from toxic algae blooms has led officials to close St. Albans Bay Park for long periods during warm stretches in the summer.

The digester is one important step toward keeping the park open through the summer, according to Denise Smith, the executive director of the Friends of Lake Champlain.

Sandra Levine, a senior attorney for the Conservation Law Foundation, which threatened to sue the state over excessive phosphorus pollution levels in the lake, said the community digester achieves positive results on multiple fronts, such as phosphorus reduction, energy production, land-use issues and increased collaboration with farmers who want to help the state clean up the lake.

Thanks for reporting an error with the story, "Green Mountain Power’s ‘community digester’ will he..."