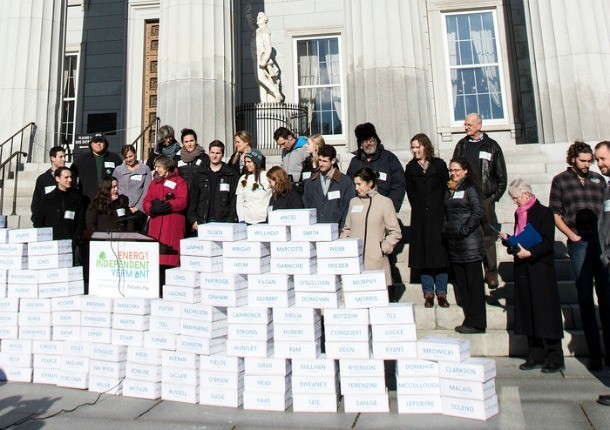 Representatives of Energy Independent Vermont deliver petitions and postcards in support of a carbon tax to the Statehouse on Monday. Courtesy photo

A coalition of Vermont environmental activists want lawmakers to “tackle global warming” by putting a price on carbon pollution.

Activists from VPIRG, Capstone Community Action in Barre and local churches delivered 25,241 postcards and petitions Monday to lawmakers (who are currently not in session) at the Statehouse.

The activists are part of the Energy Independent Vermont coalition and they held the event on the first day of deliberations of the United Nations Climate Change Conference in Paris.

Money from a carbon tax would be used to create an energy independence fund, activists said, which would help Vermonters “save money, reduce dependence on fossil fuels and create jobs.”

The coalition was created to cut carbon pollution, create jobs and “support low-income Vermonters as they make the transition to a clean energy future.”

In a statement, Paul Zabriskie, the weatherization director for Capstone Community Action in Barre, said in the first 10 years the fund would be used to “weatherize the homes of 10,000 low-income Vermont families, and help tens of thousands of other Vermonters cut their energy use and bills as well. And those money-saving energy upgrades mean hundreds more construction and renovation jobs for hard-working Vermonters as we transition to a clean energy future.”

"Vermont is already setting a national example for green building practices, energy conservation, renewable energy and environmental stewardship," Scott said. "I believe we need to balance our environmental leadership with the economic priorities we have for Vermont. Since the carbon tax has been proposed, I've heard from many Vermonters who strongly oppose higher cost gasoline and home heating fuels, and understand how this proposal would increase the cost of living across the board. It is clear to me that the vast majority of Vermonters want the Legislature to spend its time looking for ways to grow the economy and save working Vermonters money. Discussion of a new tax that could add as much as 88-cents to a gallon of gasoline is not a way to grow the economy or save money – therefore I oppose this tax. To make Vermont more affordable for families and businesses we must focus on the fundamentals and get the state's fiscal house in order without new taxes."

Thanks for reporting an error with the story, "Activists call for state lawmakers to take action on climate change"