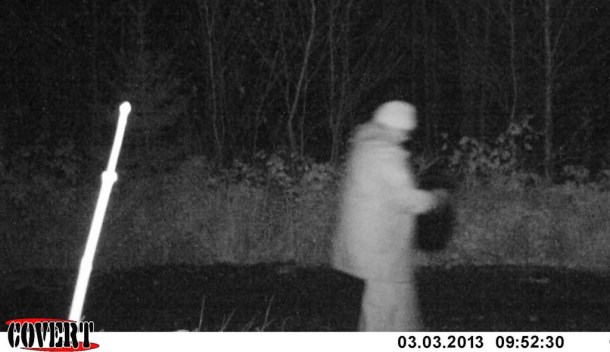 A wild game camera captures an image of a person carrying an object on property owned by wind developer David Blittersdorf in Irasburg. Courtesy photo

Police made a grisly discovery last week outside the gate of an Irasburg property belonging to a prominent wind developer — the head of a doe, apparently recently severed and delivered by night.

The grim parcel may mark a new chapter in a fierce debate over wind and solar projects in the Northeast Kingdom. But opponents of renewable energy developments say they had nothing to do with it.

David Blittersdorf, president of AllEarth Renewables, was at his home in Charlotte on Tuesday evening when he received an email notification from a cellular equipped game camera set up at the entrance to a 250-acre property he owns in Irasburg.

The infrared camera captured a fuzzy, black and white image of a figure holding something.

Blittersdorf called the Vermont State Police, worried the individual was going to vandalize a cabin located on the property. It is the same property where he hopes to install two 500-foot wind towers.

When police responded, they found no damage to the cabin, but they did discover the deer head at the gate, which is set back a few hundred feet from the public road.

Blittersdorf says the message is clear.

“I think this was put there for symbolism,” Blittersdorf said. “I saw the movie ‘The Godfather,’ what they did with the horse’s head. I think it’s a form of intimidation to see if I will stop doing the wind farm.”

Irasburg residents have strongly opposed Blittersdorf’s plan to build two turbines on the Kidder Hill property. Last month, residents voted 274-9 against the plan in a nonbinding vote at a community meeting, VPR reported.

Scott Waterman of the Vermont State Police confirmed Monday that there is a case open regarding the incident on Blittersdorf’s property. Blittersdorf reported that the game warden will be examining the deer head, to see if it may have been illegally poached.

Vince Illuzzi, a former Orleans County senator, described the incident as “disconcerting.” Illuzzi heard from Blittersdorf last week, when the developer was calling around to ensure that the incident was investigated.

(Illuzzi is also the state’s attorney in Essex County, but would not have any role in prosecuting the incident, which took place in Orleans County.)

While the deer head may not constitute grounds for a criminal case, Illuzzi said, the incident is a troubling development in the regional debate about installing wind turbines in the area.

“I think you can draw a pretty strong inference that this was placed there by one of the opponents of the project,” Illuzzi said.

Tensions in the Northeast Kingdom are running hot over the renewable energy projects proposed by Blittersdorf and others. Opposition sentiments are “pretty strong,” Illuzzi said. But Illuzzi voiced concerns that the incident last week took the opposition too far.

“You fight it on the facts and on the law, but not on intimidation and veiled threats,” Illuzzi said.

Annette Smith, who heads Vermonters for a Clean Environment, said that she has not seen any evidence that links the cervine head to wind opponents.

“Somebody left a deer head on David Blittersdorf’s property,” Smith said. “I have no basis to respond to anything else.”

Smith, a vocal opponent of Blittersdorf’s Irasburg project and other renewable energy ventures in the Northeast Kingdom, questioned the photographs that Blittersdorf shared with news outlets. The date in the lower right corner reads March 3, 2013.

Blittersdorf responded that date is incorrect because the date on the camera was never set. He provided images of troopers arriving on the scene also dated from 2013.

Meanwhile, Smith said she does not advocate violence or illegal activity in protesting energy developments in the Northeast Kingdom.

“The idea that whatever happened was the result of activities by people who oppose his projects are simply absurd and insulting,” Smith said.

Like Blittersdorf, Smith noted that there has been an escalation of rhetoric around the wind projects in recent months. In her view, however, the escalation has been on the part of Blittersdorf and others who favor the development.

In September, Smith received a notice from Blittersdorf’s attorney notifying her that she and members of Vermonters for a Clean Environment are “forbidden from entering any property owned by Mr. Blittersdorf.”

Smith read the action as “clearly an effort at intimidation.”

Blittersdorf denied that he had made any effort to “amp up” the rhetoric recently, and he said that he was prompted to send the letter after people had trespassed on his properties in numerous towns.

Meanwhile, Blittersdorf said that while he found the deer head disturbing, it would not have any bearing on his commitment to renewable energy.

“I truly believe we must have wind power and solar power renewables for our future, and I think really what’s happening is a resistance to change and folks don’t understand the realities of where we are in the world,” Blittersdorf said.

Thanks for reporting an error with the story, "Deer head left on wind developer’s property seen as warning"