Entergy declared this week that it intends to use $6.6 million from the fund for expenses at the shuttered nuclear plant, including emergency planning, insurance and property taxes. The disclosure was made in compliance with a new federal mandate to provide more detail in its trust fund withdrawal notices.

Entergy Vermont Yankee spokesman Martin Cohn said $1.2 million of that total will be used for tax payments, and he noted that the company is not required to disclose a specific figure. 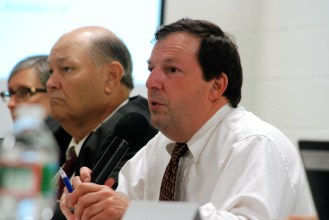 “We do not believe taxes are an appropriate withdrawal from the decommissioning trust fund,” Recchia said.

Vermont Yankee ceased producing power at the end of 2014 and is entering a period of extended dormancy called SAFSTOR. The $1.2 billion decommissioning process will take decades and completion depends in part on how quickly money accumulates in the Vernon plant’s decommissioning trust fund.

Entergy’s planned uses for the trust fund have been a source of an ongoing dispute with state officials. In the most high-profile example, the federal Nuclear Regulatory Commission approved the fund’s use for management of spent nuclear fuel, but Vermont officials have challenged that decision in federal appeals court.

Entergy also sought elimination of its obligation to provide 30-day advance notices to the NRC before taking money from the trust fund. A regulatory battle with the state ensued, and Entergy eventually withdrew the request and agreed to continue providing the notifications.

One outcome of that proceeding, though, was a requirement that Entergy must be more specific when the company has plans to spend trust-fund money on certain items. That’s the reason for this line in Entergy’s latest 30-day notice, dated Oct. 27: “The disbursement request includes, among other things, expected site-specific decommissioning costs related to emergency-planning contractor costs, insurance and property taxes.”

Standard decommissioning expenses account for the bulk of the $6.6 million request, Cohn said. He added that emergency planning and insurance, taken together, make up less than $100,000 of the company’s planned fund expenditures for October. “I can’t tell you how much for each one, because that is proprietary information to our vendors,” Cohn said.

The bulk of Entergy’s withdrawals from the trust fund, roughly $5.3 million goes toward Vermont Yankee salaries for regular plant staff and security. As the plant no longer makes money by selling power, the trust fund covers those bills, Cohn said.

Also, the fund has covered some ongoing site work — getting the plant and grounds ready for SAFSTOR.

All told, from February to now, Entergy has issued notifications for a maximum of $76 million in withdrawals from the trust fund.

The big news is the planned $1.2 million tax payment. And it is news on two fronts.

First, there’s the fact that, according to Cohn, the tax payment includes money for the state’s education fund. The state just recently began billing Entergy for property taxes because the company had been paying an electric-generating tax before the plant’s shutdown in December.

Cohn was careful to say that Entergy’s decision to begin paying state property tax does not mean company administrators agree that such a tax is proper.

Second, there’s the ongoing argument over whether any tax payments are a proper use of the Vermont Yankee trust fund. On that topic, Cohn maintains that Entergy is “compliant with NRC regulations.”

“There’s nothing new here. We’ve (previously) accounted for all these expenses,” Cohn said. “It was in our (Post-Shutdown Decommissioning Activities Report), and it was in our cost estimates.”

NRC spokesman Neil Sheehan could not say whether the agency would object to any of Entergy’s proposed expenditures. Entergy cannot withdraw money from the trust fund if the NRC files “prior written notice of objection” to that withdrawal.

“The NRC staff’s reviews are ongoing with respect to Entergy’s use of money from Vermont Yankee’s decommissioning trust fund,” Sheehan said. “The NRC staff is also continuing to review the Post-Shutdown Decommissioning Activities Report (PSDAR) and the site-specific decommissioning cost estimate for the plant. We anticipate that the latter review will be concluded by the end of the year.”

But there’s no question about the state’s stance on Entergy’s trust-fund proposals. Recchia said the fund should pay only for decommissioning activities related to radiological contamination at Vermont Yankee.

“Taxes, emergency planning – these are things that were the result of an operating plant,” Recchia said. “It is not related to the decommissioning process.”

Recchia said the state could challenge Entergy’s new trust-fund notice by objecting to the NRC. He also said state officials could contact the fund’s trustee, Mellon Bank, or pursue a court appeal.

It’s not clear which path, if any, Vermont officials will follow.

“We’ll have to look at the categories of withdrawal and decide how to deal with them,” Recchia said.

He also reiterated his concern that the NRC is not giving fair consideration to state and local concerns when deciding on decommissioning matters – including the trust fund.

“They’re not protecting Vermonters’ interests the way they should be,” Recchia said.

Thanks for reporting an error with the story, "Entergy wants to take $1.2 million from trust fund for property taxes"