[T]owns would have more regulatory authority over solar energy projects under a proposal in the Senate.

The Senate Natural Resources and Energy Committee added a provision to the state’s renewable energy bill, H.40, that allows towns to adopt bylaws requiring solar developers to comply with setback and screening requirements.

The committee passed the bill 4-1. Senate Finance will now take up the legislation.

Local setback and screening requirements would apply to solar projects beginning July 1, 2016, unless lawmakers come up with an alternative energy siting proposal next year.

The default is designed to let towns know lawmakers plan to address how and where solar projects are built in Vermont. 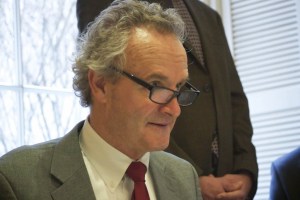 Sen. Chris Bray, D-Addison, chair of the Senate Natural Resources and Energy Committee, voted the state’s renewable energy bill, H.40, out of his committee on Friday. Photo by John Herrick/VTDigger

“We have now set a default. Changes will be made,” said Committee Chair Sen. Chris Bray, D-Addison, who originally proposed a summer working group that would have reported back with legislation next year. “There will be more deference to municipal planning and zoning if there’s no further legislative action. So I thought it was a compromise.”

Lawmakers have been trying to give towns and property owners more input in the siting of solar developments.

Jim Walsh, a New Haven selectboard member, said the town is challenging a solar project before the Public Service Board. The Senate’s siting proposal would not address the issue in a timely manner, he said.

More projects are currently proposed in the Addison County town, and Walsh says the provision asks towns to do a lot of planning work without certainty that the law will be upheld next year.

Proposals to change the state’s process for siting energy projects received strong pushback from the renewable energy industry and many environmental advocates.

Gabrielle Stebbins, executive director of Renewable Energy Vermont, said it is highly likely the group will now oppose the state’s renewable energy bill in its entirety.

She said some towns may adopt town plans that effectively prohibit new solar projects through restrictive setback and screening standards. The bill states towns cannot set requirements that prohibit or have the effect of prohibiting certain projects. But Stebbins said this opens up the possibility for disagreement and litigation.

“It will make it more uncertain for development,” she said. “It will essentially make our state (renewable energy) goals far more difficult to reach.”

Darren Springer, deputy commissioner for the Public Service Department, said he opposed the solar screening and setback provision. He said it is unclear who determines whether town plans “effectively” prohibit certain projects.

“It’s unclear if that creates a whole stream of litigation around that question.” he said. “The consequences of it, I believe, are not clear.”

He did not say whether the department would support the bill as a whole with the amendment.

The bill, known as RESET, requires utilities to sell a certain percentage of their electricity as renewable. Some of that electricity would have to come from wind and solar farms in Vermont. Most utilities would also have to reduce their customers’ fossil fuel consumption.

The bill also repeals Vermont’s current renewable energy program, SPEED. The state could face a 6 percent rate increase if changes are not made to the law, the department says.

Rep. Tony Klein, D-East Montpelier, chair of the House Committee on Natural Resources and Energy, passed the bill out of his committee in February. The day the House voted on the bill, Klein said he was beginning to take testimony on the issue of siting. The committee has not indicated whether it will vote on a siting bill this year.

Klein has said he would not support a bill that is a clear attempt to stop solar development. He has not discuss the bill with his committee.

Thanks for reporting an error with the story, "Senate panel gives towns more regulatory authority over solar project..."