Members of what will likely be one of this session’s busiest legislative committees wasted no time getting to work Wednesday.

The House Education Committee met Wednesday on the first day of the Vermont Legislature. Under the new leadership of Rep. David Sharpe, D-Bristol, committee members prepared to tackle the hottest issues of the 2014 election: Education spending and financing.

High education costs are a concern for many committee members and declining enrollment trends continue to pose challenges.

“We have the highest per-pupil costs in the country, and the lowest student-to-teacher ratio, and if you look at our scores, they’re not better,” Juskiewicz said. “At the same time, you’ve got your teachers going up, and student population going down significantly, so those are the things that we really need to hone in on.”

Having served his town’s school board for 20 years, Juskiewicz said at the local level, “If you are going to pass policy, you know what the cost is going to be, and with the way that we’re reformatted now, I think we’re going to have the opportunity to do that,” at the state level.

Like Juskiewicz, ranking member Rep. Kevin “Coach” Christie, D-Hartford, served on his hometown school board for many years and saw how changes such as reducing staff through retirements and attrition can add up to real savings.

Christie referenced the numbers the Agency of Education’s new secretary, Rebecca Holcombe, has advanced, showing, he said, that a 0.5 percent change statewide in the student-to-teacher ratio would result in $74 million in savings.

“We’re not talking about putting 20 or 30 extra kids in the classroom,” Christie said. Some “minimal changes in our delivery model,” can find savings, “but in some cases it’s going to take a gutsy move.” 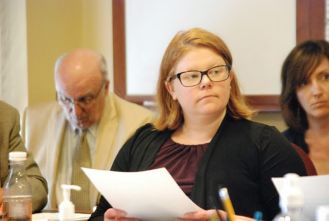 Rep. Sarah Buxton, D-Tunbridge, who has been on the committee for four years, credited the previous leadership of the committee, former chair Rep. Joey Donovan, D-Burlington, who is now on the House Ways and Means Committee, with making the tough decisions to move the issue forward in the House.

Buxton called the bill her “claim to fame in the ed realm,” saying she is an aunt to eight children, and sees how important early education is.

“Publicly funded universal access to early learning is one of the things I think we’re going to look back and just wonder why we didn’t do it sooner,” she said.

“Education looks very different now than it did 20 years ago, when I graduated from high school, and it looks different than it did 10 years ago when my youngest sister graduated from high school,” Buxton said. “We need to have a system that reflects our ability to meet the needs of every child and have a student-based focus rather than a school-based approach to delivery.

Buxton said looking at education in terms of hours in a seat, years in a classroom “is an outdated approach” that doesn’t help students meet the challenges of the job market.

Sharpe, who was asked to head the committee, introduced himself to the committee. He was born in Detroit and came to Vermont through Vista, around the time of the war in Vietnam. His draft number never came up and he was sent here.

“I was shocked,” he said. From reading Vermont Life and seeing pictures of New England, he thought everyone lived in a white Cape and “had a cow or two … I found out very differently,” he said of the real Vermont he came to understand, and how much poverty exists here, for one thing.

The staff who will work with lawmakers were given a few moments on Wednesday to talk about their roles in the process. Staff members who work on finance, referred to in committee as “the money team,” will be heavily involved in the education committee’s daily work this year.

At 9 a.m. Thursday, the committee will begin setting its schedule for taking testimony.

Thanks for reporting an error with the story, "House Education Committee begins high-profile work"