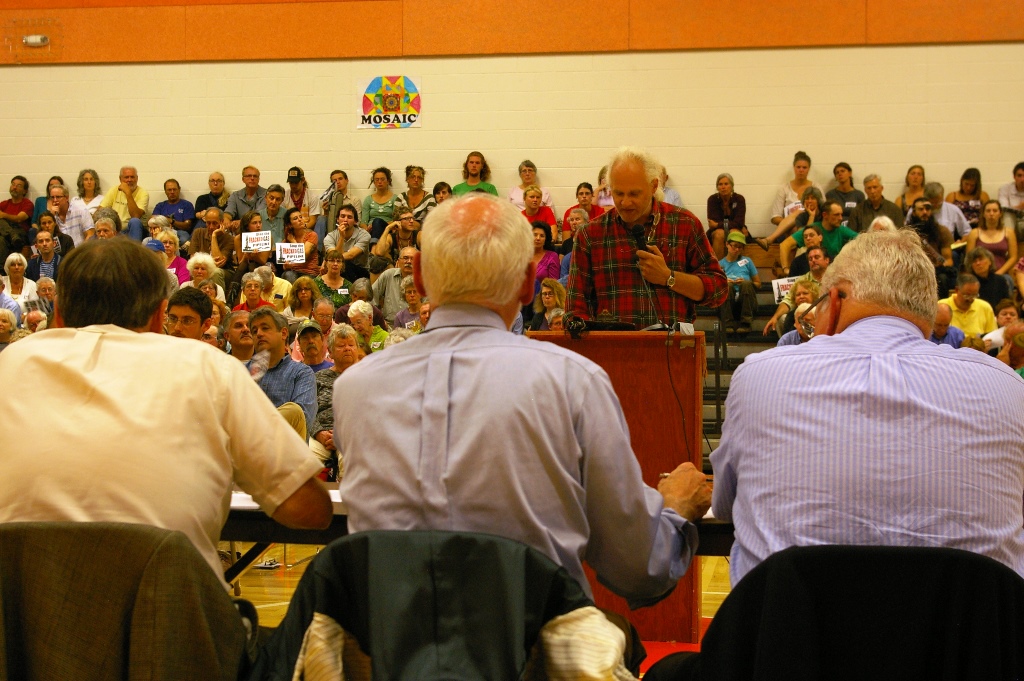 Public Service Board members listen as Craig Zondag speaks against a proposal to build a natural gas pipeline in Addison County on Tuesday in Middlebury. Photo by Andrew Stein/VTDigger

MIDDLEBURY -- About 600 Vermonters thronged to the Middlebury Union Middle School on Tuesday night to oppose a natural gas pipeline proposed for Addison County.

A rowdy faction of the opposition did not represent all of the views at the Vermont Public Service Board’s second public hearing on the proposed expansion by Vermont Gas Systems, but the voluminous pleas to protect Vermont’s environment drowned out many of the pipeline’s proponents, who said Vermont and the world are not yet ready to heat solely with renewable energy resources.

As the public hearing proceeded in the middle school’s orange-streaked gymnasium, the boisterous crowd slipped from the control of the three-member panel. The board — clearly exasperated at times — listened patiently to dozens of Vermonters who spoke over the course of the three-hour-plus event.

The tension was palpable in the 90-degree room. The hearing’s tone wavered from passionate to theatrical to downright angry and threatening. There were moments when board members scolded the audience, and when members of the public, in turn, yelled at the board.

What sparked the heated gathering is a proposed 41.2-mile, $86.6 million natural gas transmission line into the heart of Addison County. The public hearing comes in advance of a week of technical hearings in Montpelier that will cover a range of topics, from the proposal’s economics to its environmental impacts.

Ultimately, the burden of proof falls on VTGas, which must convince the board that the project is in the public good.

VTGas executives argue that natural gas is a cheaper, cleaner alternative to propane and oil, fuels that are widely used to heat homes and businesses in Addison County. Officials from the company and their supporters frequently bill natural gas as a bridge fuel to a fully renewable energy future.

But dozens of opponents who spoke out on Tuesday vehemently disagree.

“Gas is not a bridge; it’s a gangplank!” many cried out to the board.

'You should be ashamed'

The board had intended for the testimony to alternate from opponent to proponent throughout the course of the evening. But after a handful of residents spoke, and only one was in favor of the pipeline, the board grew indignant that members of the audience had falsely identified their position on the project before the hearing. 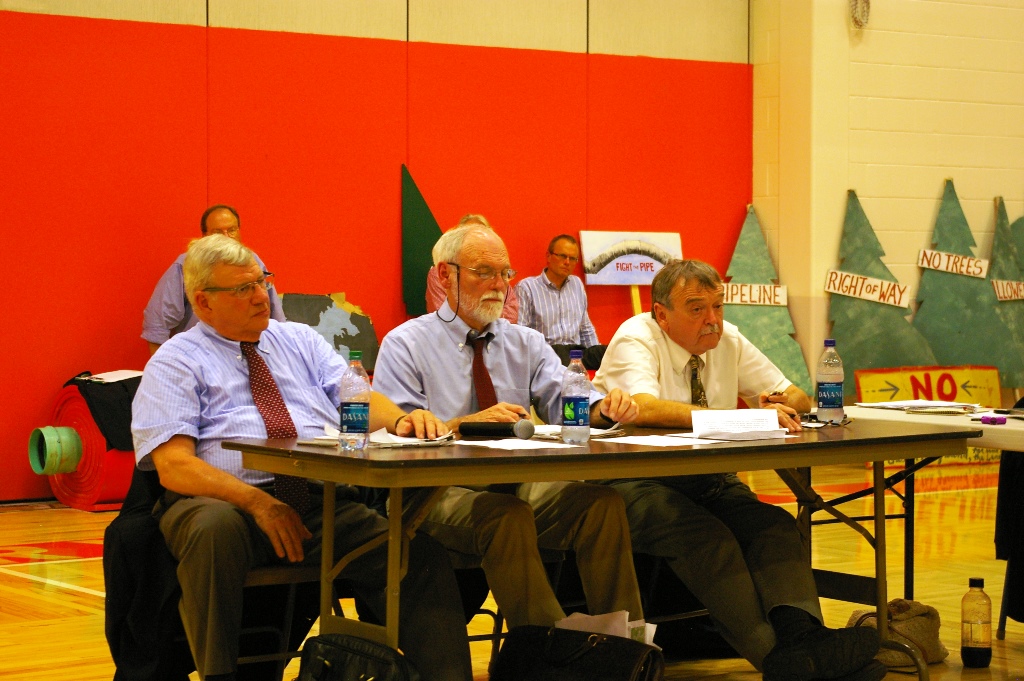 Weary members of the Public Service Board (from left) David Coen, James Volz and John Burke. Photo by Andrew Stein/VTDigger

“People who have signed up have not been honest about this,” board chairman James Volz said.

John Burke, another board member, gave the crowd a stern rebuke.

“How are we going to feel about taking seriously the comments you give us, if you’re not going to play by the rules?” he said. “Seriously, no matter what you say, to do something when you’re not saying the truth, hopefully it gnaws at you a little. A lot of your concerns were whether the truth was told to you, and you should be ashamed of not telling the truth.”

Will Bennington, a 24-year-old organic farmer from Monkton, is an organizer for the anti-pipeline group Rising Tide Vermont. Bennington and other members of Rising Tide formed an ad-hoc group called Vermont Intergenerational Stewards to intervene in the Public Service Board’s permitting process, but were not granted party status. Instead, he led a protest outside the hearing.

Bennington is one of many Vermonters who have expressed deep dissatisfaction this past year with a board process often deemed “citizen unfriendly.”

When he was given the microphone, Bennington laid into the board.

“The citizen’s guide to the 248 process does not lay out rules, and it certainly doesn’t lay out the rules that you impose on us tonight, which were different from the rules in March,” he said. “That is completely unfair, completely undemocratic shows, and you are rolling your eyes at me! And you are not supposed to respond to me during this process!”

After cooling his temper, Bennington told the board that the Department of Public Service had not responded to him or his peers on questions they submitted more than a month ago. The department, which is a separate entity from the board, is charged with representing the public’s interest in Public Service Board proceedings.

The department, however, falls under the wing of the executive branch, which is subject to the governor’s political will. Gov. Peter Shumlin supports the natural gas pipeline.

“How do we know that they are actually paying attention to the people?” Bennington asked the board. “We have no voice in this process.” 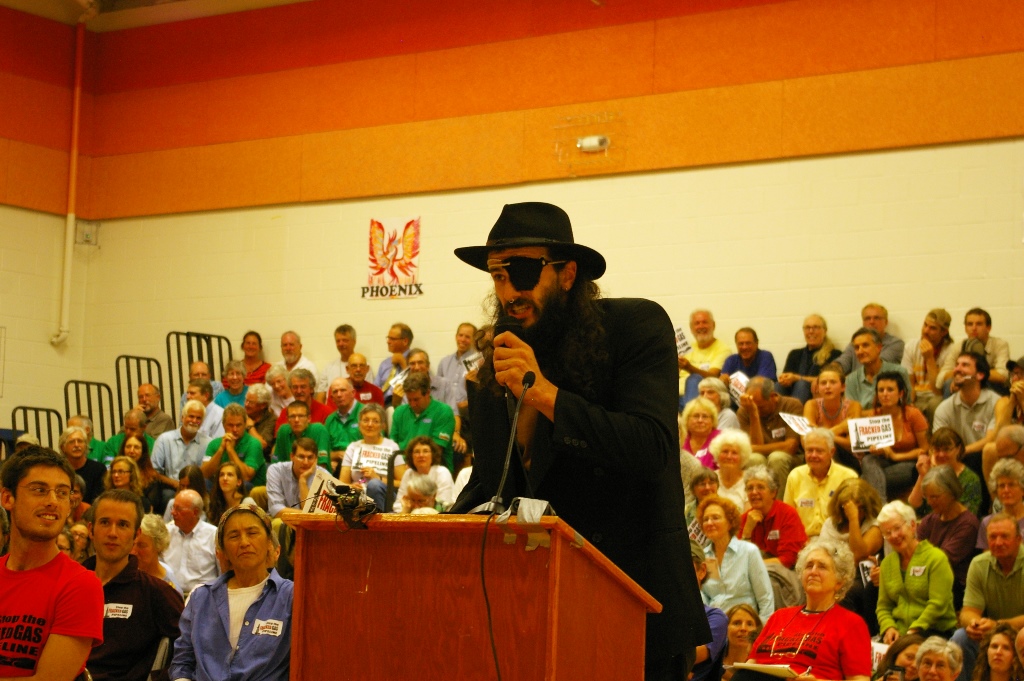 Jonathan Shapiro, who is also a member of Rising Tide Vermont, echoed a similar sentiment after his testimony, where he posed as Captain Hook from J.M. Barrie’s "Peter Pan."

“This is a process where money talks, and we don’t have it,” he said.

The House and Senate Committees on Natural Resources and Energy are convening at the Statehouse on Sept. 25 to discuss changes to the board’s permitting process. The Legislature has the power to alter its structure.

The wall of opposition

The environment was front and center as dozens of Vermonters voiced relentless opposition to the pipeline.

The chief issue they repeatedly criticized was the state's growing reliance on an industry that has thrived by hydraulic fracturing, or fracking.

Since Congress exempted fracking from the Clean Water Act and the Safe Drinking Water Act, the practice has become common in the United States. Fracking uses a series of underground explosions and high-pressure injections of water, sand and chemicals to extract natural gas from rock formations, such as shale. VTGas uses natural gas from Alberta fracking operations.

Environmentalists say fracking is poisoning North American water and land resources. In 2012, Vermont was the first state in the United States to ban the practice.

Several Vermonters on Tuesday told the board that it would be hypocritical for the state to advance an industry that relies on a practice the state has prohibited.

“I want you to realize Vermont said no to fracking, and the pipeline is part of fracking,” Elsie Kiley of Charlotte said. “Vermont does not want the pipeline.”

Other Vermonters argued that expanding natural gas would be counterintuitive to the state’s Comprehensive Energy Plan goal of drawing 90 percent of the its energy from renewable sources by 2050.

That same plan, however, provides the guidance that the Department of Public Service, the Public Service Board and Vermont Gas Systems “should continue to evaluate and take advantage of cost-effective opportunities to extend the natural gas service territory.”

“Current Vermont state policy is unequivocal as it relates to both fracking and the need to develop renewable energy,” he said. “A new fracked gas pipeline runs counter to both polices, and it should be denied a Certificate of Public Good by the Public Service Board.”

Burns said wood chips, wood pellets and geothermal heating pumps would be cleaner sources of heat than gas. Renewable energy may also soon generate electric heat in the near future.

“We’re doing the heat pump pilot project, with air-source heat pumps, and the pump uses electricity, but we’re a long ways off,” she said in an interview.

After the hearing, VTGas CEO Don Gilbert said he didn’t think the opponents of the pipeline had drastically different values than those of his company.

“When people think they can get off of fracked fuel by not using fracked fuel, well oil and propane are fracked,” he said. “Vermonters have a choice. This is just giving Vermonters a choice.”

VTGas pipes natural gas to more than 15 communities across Chittenden and Franklin counties. Gilbert said the company has not experienced opposition to a pipeline like this before.

“Enosburg is a good example,” he said. “People are very excited about the natural gas service up there.”

The company is adding 14 miles of natural gas distribution line to serve 490 residential and 110 commercial customers in Enosburg.

While they were few and far between, proponents of the pipeline were present to voice their support, and among them were influential members of the business community.

Andy Mayer, a Cornwall resident and president of the Addison County Chamber of Commerce, read a statement supporting the pipeline on behalf of the chamber’s board of directors.

“We believe it will have a significant economic benefit for our area,” he said. “This will help them save money immediately, allowing them to hire workers they need or pay the ones they have better. They will also be able to invest in their facilities and equipment. Our communities would also greatly benefit, whether it’s schools or municipal buildings they could certainly use the help on their tight budgets.”

Bill Flood, the engineering director for UTC Aerospace Systems in Vergennes, says natural gas will help the designer and manufacturer of aircraft management systems maintain its competitive edge. The company employs more than 800 people, and Flood says it spend about a third of its annual expenditures in the state.

“Our business competes globally. To retain our competitive position as a viable aerospace business, we must provide cost-effective solutions by continuously investing not only in our people but in our processes as well as our infrastructure,” he said. “ Our company supports the natural gas expansion project for our factory in Vergennes. A, natural gas is a more cost-effective solution for our energy needs. B, natural gas eliminates a safety concern we have as well as an environmental risk associated with heating oil that’s trucked in.”

Donna Donahue, the former president of the Better Middlebury Partnership, a local business group, says natural gas is crucial for economic development in her area.

“We have to be competitive with other places,” she said. “Whether it’s a 25 percent or 40 percent reduction in fuel costs, that’s very significant to any business owner. That business owner hires my neighbors, hires our children, and is part of our future. I don’t believe, and I would love to see, that we don’t need gas or oil. But that’s not the point we’re at.” 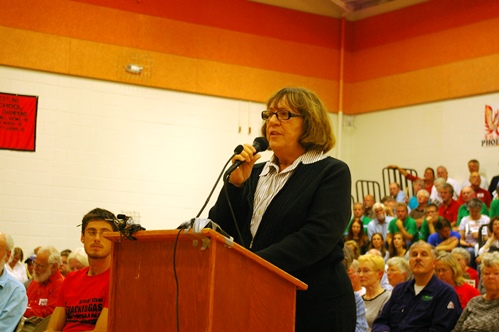 Donna Donahue, former president of the Better Middlebury Partnership, a local business group, speaks in favor of the pipeline. Photo by Andrew Stein/VTDigger

Thanks for reporting an error with the story, "Hundreds of natural gas pipeline opponents in Addison County dominate..."