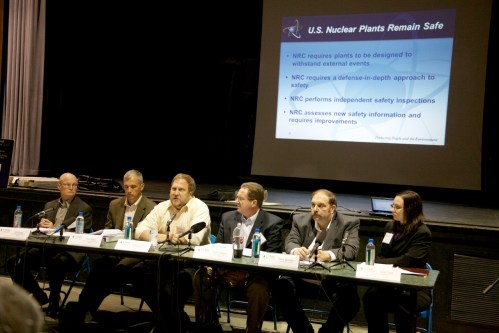 Representatives of the NRC give a presentation on Vermont Yankee's most recent safety assessment at a public hearing on Wednesday at Brattleboro Union High School. Photo by David Shaw, The Commons

Editor’s note: Jon Margolis is a columnist for VTDigger.org. He is a retired political writer for the Chicago Tribune.

It doesn’t seem to be what they meant to do, but movers and shakers of the energy world – one public, one private – gave Vermonters two lessons about electricity generation last week:

LESSON ONE: Wind power seems to make money only if it’s government-subsidized;

LESSON TWO: The Nuclear Regulator Commission promotes nuclear power as much as it regulates it.

Neither lesson is likely to shock anyone who has been paying minimal attention to the subject. Nor does either lesson necessarily reveal information that damages the bona fides of wind towers or nuclear power plants. Those are matters of opinion.

Green Mountain Power did not deny that one reason it wants the Public Service Board to soften the conditions it imposed on the company’s Certificate of Public Good to build the Lowell Mountain wind project is that if the wind towers don’t start churning out power by the end of next year, the company might not get federal tax credits.

On the other hand, the company issued no public statement at all announcing its petition to the PSB, perhaps an indication that it would have been pleased had nobody noticed.

Brice Simon, the lawyer for the Lowell Mountain Group, which opposes the project, said it was “highly questionable whether Green Mountain Power can show that the project is economically viable without the tax credit.”

Simon, to be sure, is not a disinterested observer. But even Green Mountain Power spokesperson Dorothy Schnure would not guarantee the project would go forward without the credits.

“I don’t know that we have a decision on that,” she said. “Our intent is still to meet that deadline” to qualify for the tax credits.

At any rate, Schnure said, the tax credits would benefit Green Mountain Power’s 95,000 customers, not its stockholders.

“All federal tax credits flow through to the customers in lower costs,” she said. “None to stockholders because it’s a regulated utility.”

It is, with rates ultimately set by the PSB. But accounting is a creative art, and a tax credit could easily accrue to the advantage of both customers and stockholders.

As for the Nuclear Regulatory Commission, it did not admit to Vermont Independent Sen. Bernie Sanders that it had urged the Justice Department to intervene on behalf of the Entergy Corp.’s lawsuit against Vermont’s effort to close down Entergy’s Vermont Yankee nuclear plant next year.

Instead, Nuclear Regulator Commission Chairman Gregory Jaczko told Sanders, “the matter in front of the commission was one of our legal discussions, and we generally like to keep those closed matters because it preserves the opportunity for our legal counsel to give us frank legal recommendations.”

Keeping legal advice confidential is a reasonable policy. But when public officials are accused of doing something they perhaps ought not to have done, their instinctive reaction is to deny it.

Unless, of course, it’s true. This exchange took place at a Senate hearing. Lying to Congress is almost always unwise and often a crime. Only a modest dose of cynicism is required to conclude that Sanders had caught the Nuclear Regulatory Commission taking a step unrelated to its mission of keeping the nuclear power plants safe.

But what else is new? The Nuclear Regulatory Commission has often been described as the perfect example of “regulatory capture,” the tendency of regulating agencies to ally themselves with the industries they are supposed to regulate.
Meanwhile, wind power advocates have acknowledged that, at least for now, their projects are economically viable only with federal tax subsidies.

When the subsidies were temporarily suspended in 2004, wind power development fell sharply.

PTC is the federal production tax credit. RPS is a renewable portfolio standard used by some states to encourage development of wind, solar and other renewable power sources.

Not that wind power is the only energy source that gets federal subsidies. An analysis by the (perhaps biased) Environmental Law Institute concluded that fossil fuel producers get $72.5 billion in federal subsidies, to only $29 billion for renewable energy producers. Nuclear power advocates like to point out wind’s reliance on government help. But perhaps no enterprise in the history of the world has gotten more government subsidy and protection than nuclear power. Its initial research and development was the Manhattan Project, which created the first atom bomb. The Price-Anderson Act, first passed in 1957, limits a nuclear plant’s liability. Without such a limit, no insurance company would cover a plant. Without coverage, no bank would finance it, even with the generous federal loan guarantees available to the industry.

Still, the tax breaks for renewable energy do seem to play a unique role. Right now, there are two of them. One, known as the 1603 program, provides a government grant of one third of the capital cost of a renewable energy project. This benefit, part of the “stimulus” effort of the Obama administration, expires at the end of this year and is not likely to be renewed.

The other subsidy is the Production Tax Credit which entitles wind developers to reduce their federal corporate tax payments by 2.2 cents for every kilowatt hour produced by the project. A corporation can not use both the 1603 program and PTCs.

PTCs can be sold. Developers of wind and solar power sell them if the companies don’t expect to earn a profit, and therefore would owe no federal income taxes. In that case, the PTCs would do them no good, but they can provide a tax shelter for high-income taxpayers.

Schnure said the Lowell project is expected to produce 185 million kilowatt hours a year. That would amount to a $4,070,000 tax credit every year for 10 years.

The Production Tax Credit benefit may not be renewed, at least not if Republicans in Congress have their way. If it is not, Green Mountain Power has to start selling power from Lowell Mountain by the end of 2012 or lose the tax benefit. That prospect probably explains why the company wants the Public Service Board to loosen up some of the conditions it imposed when it granted the Certificate of Public Good.

Here the board was stricter with the company than was the Agency of Natural Resources, which agreed to allow the company to start construction while still trying to arrange for the easements, as long as it got the necessary easements before the project actually started to produce electricity.

The board, apparently influenced by the testimony of Agency of Natural Resources scientist Eric Sorenson that the project would cause serious ecological degradation, some of it to “rare and irreplaceable natural areas,” ruled that the easements had to be obtained before construction could start.

The company, arguing that it would take too long to make those arrangements, wants the Public Service Board to allow it to revert to the terms of its agreement with the Agency of Natural Resources. “Too long,” in this case, seems to mean that it might put at risk its eligibility for the tax credits.

Over the years, the board has been reluctant to alter its own conditions. On the other hand, it is no doubt aware that state officials, starting with Gov. Peter Shumlin, are committed to wind power in general and the Lowell project in particular.

Thanks for reporting an error with the story, "Margolis: Powering up electricity lessons"