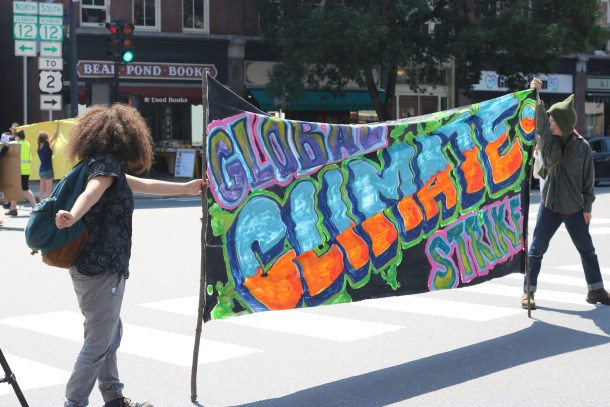 Two protesters block off State Street as they call attention to the Global Climate Strike on Sept. 20. Photo by Ellie French/VTDigger

[H]igh schoolers shut down a key Montpelier intersection for almost an hour Friday, demanding an education that will prepare them for a “collapsing climate and economy.”

“The purpose of schools is to teach the skills and knowledge that students will need in their life,” said 15-year-old Iris Hsiang, a high schooler in Essex. “But now, those things are fundamentally changing.”

The students came from across the country to learn about activism at Uprise Youth Action Camp, a Northeast Kingdom summer program focused on climate justice.

The week-long camp culminated with the protest, where campers called for an education that would prepare them for “climate chaos.” They argued that there were two big things missing from schools’ curriculums — alternative economics and climate resilience — things they say students will need more and more as the climate continues to change.

“We’re growing up in a different world than that of our parents,” Hsiang said. “They didn’t have to deal with the rising sea levels, the exacerbated natural disasters, and the other curses of climate change. But we do. We need education that will reflect the world that we’re being raised into.”

To that end, the activists called on school administrators to shut down classes on Sept. 20 for the Global Climate Strike, and not penalize the students who walk out. They described the Friday protest as raising awareness for the much larger protest in September.

The students started at the Kellogg-Hubbard Library on Main Street, ultimately making their way to the central intersection with State Street where protesters holding banners blocked oncoming traffic in all four directions, while others stood in the center of the road, speaking and singing about their cause.

The adults from the camp, meanwhile, stood back. The teenagers were on their own in deciding where to protest, what to say and how to handle the many angry drivers surrounding them.

“The cars will be angry,” one protester told the group before they began. But the group wasn’t too worried. Like many climate protests, causing disruption was one of the campers’ intentions.

Despite the engine revving, almost constant honking, and the occasional car trying to drive straight through the protest, the students held their ground, even after police arrived at the scene.

“We want to live past 12 years,” said 16-year-old Bella Oliver. “We want to be able to start families and not worry about what to eat next because agriculture is starting to fail. We just want the education system to teach us about the problem of climate change and about the solutions.” 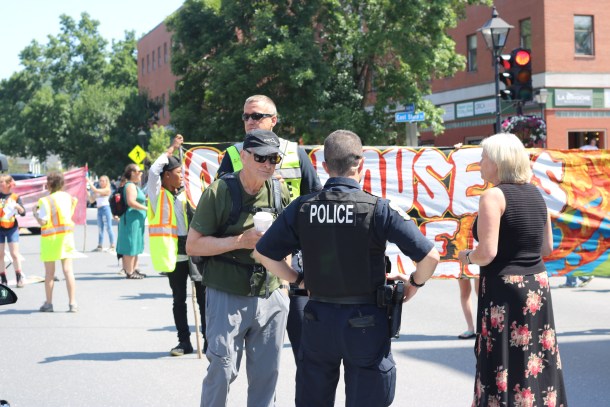 Police arrived to the intersection of State and Main streets after about five minutes, quickly closing down roads and turning around cars. Photo by Ellie French/VTDigger

Just about every pedestrian, driver or cyclist along the two roads were approached during the protest with a flyer and a spiel about why the students were protesting.

Amid the many angry drivers, a few were happy about the holdup and joined the action.

After about half an hour of shutting down the streets, the protesters had to make a choice.

“In five minutes, the police are going to start arresting us,” one activist called to the group.

Law enforcement gave them a choice: March on to the Statehouse, or to hold their ground.

The adults who ran the organizing camp didn’t swoop in to tell the students what to do. Instead, they swapped places with the young people, holding the banners so that students could congregate and decide what to do. Ultimately, they opted to take their protest to the Statehouse.

“Some people didn’t want to be arrested,” said Jillian Haviland. “And I think that we’re going to get a lot of responses from people as we march anyway.” 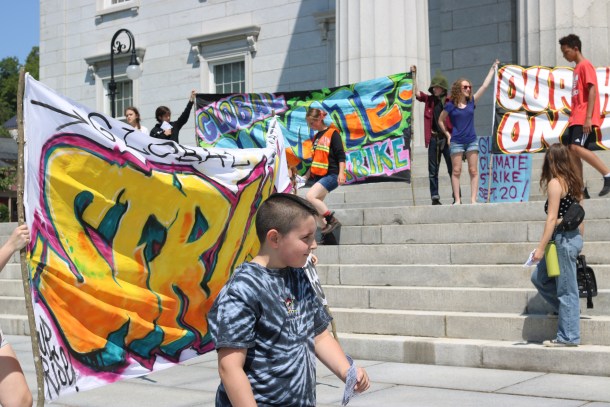 The protest wrapped up on the steps of the Statehouse. Photo by Ellie French/VTDigger

CORRECTION: Iris Hsiang’s name and age were incorrect in a previous version of this story.

Thanks for reporting an error with the story, "Students shut down major Montpelier intersection in climate protest"