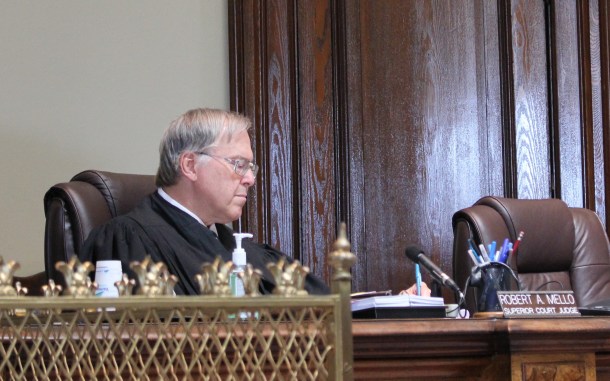 Vermont Superior Court Judge Robert Mello hears oral arguments last week in the Stowe and Elmore-Morristown Act 46 case. The towns, which do not want to merge school districts, argue that the state consolidation law is unconstitutional. Photo by Lola Duffort/VTDigger

A Superior Court judge has sided with the state in the Stowe and Elmore-Morristown challenge to Act 46 and dismissed all of the plaintiff school districts’ claims.

The school districts, which have been ordered to merge by July 1 by the State Board of Education under the consolidation law, had asked Judge Robert Mello to remand their case back to the state board for reconsideration. But in a 29-page ruling issued Monday – just one week after oral arguments were heard in the case – Mello ruled against them on all counts.

Cara Zimmerman, the school board chair for Stowe and the Lamoille South Supervisory Union, which includes Elmore-Morristown, said the districts were “disappointed” in Mello’s ruling.

“We believe that the State Board of Education failed to take critical factors into account and that our current structure is the best means for achieving Act 46’s goals of quality, equity, transparency and affordability,” she wrote in an email. “However, we have been preparing for all outcomes, including a merger, and will continue this process.”

She said the school boards would convene next week to go over the decision and “determine our next steps.”

State Board of Education Chair Krista Huling said the board was “pleased with the outcome of the case.”

The Stowe and Elmore-Morristown case is one of three lawsuits challenging the law, and the suits made overlapping arguments about why forced mergers were unconstitutional. In several instances, Mello simply quoted verbatim from recent rulings he has issued on the constitutional questions at play. All three lawsuits, for example, argue that the Legislature unconstitutionally delegated its powers when it gave the state board the final say on forced mergers.

But Stowe and Elmore-Morristown had also argued that the state board violated their due process rights and acted in an arbitrary manner. Board members didn’t read their proposal for why they ought to remain independent, the school districts contended, and relied on incorrect enrollment data about the districts.

But Mello disagreed that it was clear board members didn’t do their due diligence, and noted that, even when corrected, the districts’ enrollment data did not allow it to meet the threshold in law for remaining independent.

“The court does not find that the isolated comments the Plaintiffs highlight support a conclusion that the Board did not read its proposal or otherwise based its decision on materially-erroneous information,” the judge wrote.

The two districts had also argued that the state board was required to show why a merger between the two was not only “possible” and “practicable,” but also that it was “necessary” for achieving the goals of the law.

Mello ultimately agreed with the state’s take on the law, saying the school districts’ argument “rests upon a misinterpretation of the Legislature’s directives and intent.”

Rep. Heidi Scheuermann, R-Stowe, has been leading the charge in the Legislature to delay forced mergers by a year. A bill to do so, H.39, has passed both the House and the Senate, but the two chambers are at loggerheads over how to reconcile their respective proposals.

Scheuermann expressed frustration with her fellow House lawmakers for how they had handled negotiations, and said she would keep advocating for a delay.

“In order to do this right, we need to extend this compressed timeframe,” she said.

Thanks for reporting an error with the story, "Judge dismisses Stowe, Elmore-Morristown Act 46 lawsuit"