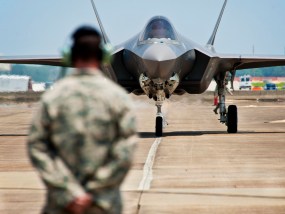 The first noise map for the Burlington International Airport that includes the F-35s coming this fall is “substantially complete” and won’t include any surprises, airport officials say.

The map is consistent with findings in the Air Force’s Environmental Impact Statement and will be published May 28, according to Nick Longo, the airport’s deputy director of aviation.

The total number of households affected is still being calculated but will likely be close to the initial estimate of 1,000, Longo said.

“There’s no big surprises, it’s very consistent with what we’ve all seen in the Environmental Impact Statement, and this is the opportunity now for the FAA and the airport to move forward,” Longo said.

While the map factors in all aircraft at the airport, the changes are due to the arrival of the F-35s.

The F-35s will be four times as loud as the F-16s, which recently wrapped up their tenure in the state.

The use of afterburners by the F-16s prompted a 2015 noise map. In total, about 200 homes have been purchased since 1990 through a federal program.

The first two F-35s are set to arrive in September and October, and two more jets will be added until the full fleet of 18 jets arrives by the end of summer 2020. The map projects noise levels in 2023, well after the full fleet is set to arrive, Longo said.

The arrival of the F-35 has been controversial, with strong support from local politicians and business leaders but opposition from some residents. In Burlington, 55 percent of residents supported a ballot item on Town Meeting Day 2018 advising the city council to call for the cancellation of F-35 basing at the airport. City councils in South Burlington and Winooski have also weighed in against the program.

Rosanne Greco, a South Burlington resident who has lead the charge against the F-35 basing, said she wasn’t surprised the noise map lined up with the Air Force environmental impact statement. She stressed that the noise map is only an estimate, and time will tell the actual noise impacts from the jets.

“It’s still a computer-generated assessment for what it’s going to be, we won’t know until it arrives and they do on-the-ground measurements what the noise level will be,” Greco said.

Greco, a retired Air Force colonel, said there’s nothing opponents can do at this point to stop the noise of the F-35s.

The long-awaited map was initially expected in December, which turned into February and now May. Longo said the government shutdown played a major role in the delay.

“When the federal shutdown occurred, you had that 30 plus day stop where there was no communication with FAA headquarters in DC,” Longo said. “I can’t even begin to imagine the backlog of requests they received.”

The noise map qualifies the airport to receive federal noise mitigation grants. The airport is working on finalizing plans for how those grants will be used, and residents living inside the zone where the average 24-hour weighted noise level is 65 or higher could be eligible for funding.

Longo said the airport was planning on using the grants to fund three programs for residents who will be affected by the increased noise.

In the third program, the airport would purchase the property, insulate it and then sell it.

The airport hopes to be able to access grant funding for up to 50 houses per year, but the details will be up to the FAA.

“We do, as an airport, want to help as quickly and exponentially as possible under these guidelines, but we truly are the facilitator of these FAA guidelines,” Longo said.

The airport plans on starting with the houses closest to the airport before working its way out to those further away. Longo said the process is still in the planning stakes, and will take 10 to 20 years.

Longo said the airport has stopped its previous practice of purchasing and removing houses affected by the noise.

“This isn’t a quick boat that you can shift directions quickly, this is a cruise ship that takes a long time to change direction, and a lot of communication with the FAA and approval from the FAA,” he said. “Ultimately it’s going to be the FAA decision on what happens to replace these incompatible land uses.”

Mikel Arcovitch, the public affairs officer for the Vermont National Guard, said the Guard would wait for the map to be released before commenting on its specifics.

“We’ve worked very closely with airport and will continue to work with the airport to provide support as far as sound mitigation goes to mitigate the impact on the community,” Arcovitch said.

The airport will be holding a public forum May 29 at the airport on the new noise map.

Ed Note — An earlier version of this story incorrectly stated that Col. Greco believed the basing of the F-35s could not be stopped. She was referring to the noise of the planes.

Thanks for reporting an error with the story, "Noise map to show more homes affected by F-35s"