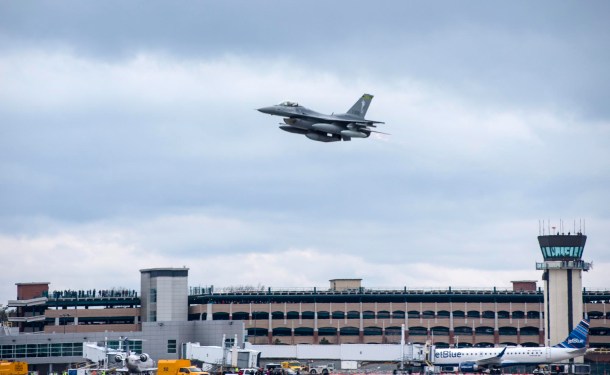 The last four Vermont Air National Guard F-16 fighter jets left the VTANG airbase during a "Viper Out" ceremony in South Burlington on Saturday, April 6, 2019. The F-16s arrived in 1986 and are being re-assigned elsewhere to make room for new F-35 jets at the base. Photo by Glenn Russell/VTDigger

[S]OUTH BURLINGTON -- The last of the F-16 fighter jets roared out of Vermont on Saturday, ending a 33-year era and making way for the arrival of the next generation, the controversial F-35s, starting this fall.

Thousands watched as the final four F-16s took off, nosed upward and banked left sharply, their engine afterburner glowing orange. Each circled back for two more low passes over the Burlington International Airport before they returned in tight formation for a final farewell. The first jet took off at 1:58 pm, in honor of the 158th Fighter Wing, the unit that makes up the Vermont Air National Guard.

At an Air Guard ceremony beforehand, Adjutant General Greg Knight, the head of the National Guard, and Col. David Smith, the Air Guard wing commander, praised the work of thousands of Guard members who over decades had flown, fixed and maintained the planes, their families, the community, and, noting the team effort, even those that prepared meals at VTANG’s headquarters at the South Burlington airport.

“Today I will get that same feeling I’ve had for many years — that’s the feeling of confidence and mission accomplishment each and every time, without fail. You never cease to amaze me,” said Knight who was dressed like the rank and file in camouflage fatigues.

Knight said the planes’ departure signaled the end of a “historic chapter” that started when the planes first arrived in 1986 and was marked by several significant events. 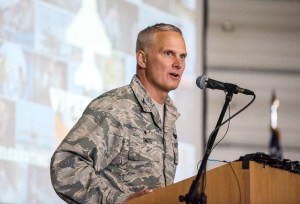 Vermont F-16 pilots were the first military flying over New York City after the 9/11 attacks in 2001 and patrolled the skies there for 122 consecutive days. Air Guard pilots have been on five combat missions between 2004 and 2017. According to Smith, Vermont pilots have logged more than 10,000 combat hours in F-16s and about 140,000 hours overall on 85,000 sorties.

Wing Commander Smith noted the changing role of the F-16 Fighting Falcon over its decades in Vermont, from fighting the Cold War in the mid-1980s to drug interdiction to later combating terrorism. He said the Air Guard’s mission and the world changed after 9/11. He called the transition from the F-16 to the F-35 “bittersweet” and said the Guard’s “heroic work” with the F-16 program had enhanced the legacy of the “Green Mountain Boys.”

“We’ve come full circle and it’s been quite a journey,” Smith said of the Guard’s mission to an overflow crowd of more than 1,000 at the VTANG private ceremony, a short walk from the runway. “And the next one’s just beginning.”

Smith recalled a cold night in December 2016 when Gov. Phil Scott helped send off 12 of the aircraft and pilots to Operation Iraqi Freedom. Scott attended but did not speak at the Saturday VTANG event.

Under cloudy skies with light wind, crowds of hundreds also watched the last flights from the commercial airport across the runway, with observers on the rooftop parking garage as well as outside the airport fences. The gray planes paraded in front of the commercial airport before the final takeoff, called “Viper Out” because the F-16s’ cockpit resembles to some the head of a snake.

According to Guard officials, the first F-35 fighter jets will arrive in September, with a total of 18 planes and two backups coming in over a year. Vermont was the first National Guard site to be selected for the F-35 program. Supporters say hosting the F-35s will preserve the hundreds of jobs associated with the Air Guard program. Vermont politicians, particularly Sen. Patrick Leahy, D-Vt, pushed hard for Vermont hosting; last year, Air Force Secretary Heather Wilson said Vermont would “highly likely” lose its air base if it didn’t host the F-35s.

The basing of the F-35 Lightning II aircraft in Burlington has been controversial. The new planes are louder than the F-16s and opponents argue they should not be based at a facility in a largely residential area. City councils in Winooski, South Burlington and Burlington have passed resolutions that requested the Air Force reverse its decision to base the new fighter jets in Burlington, without success.

However, many Guard members, including fighter pilot Lt. Col. Dan “Gump” Finnegan, say the community has consistently supported the Guard and its mission, including for the upcoming F-35 program. In interviews this week, Finnegan and others described opposition to the F-35 as small, yet vocal, while also defending their right to voice objections.

“We’re very comfortable with the support we have in the community and it’s healthy if people have concerns or questions. We feel we’ve addressed those openly and transparently, but you’re not going to convince everyone all the time,” said Finnegan, who logged 3,400 hours flying F-16s. 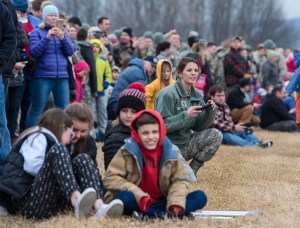 Members of the National Guard community walk out to the flight line to watch as the last four Vermont Air National Guard F-16 fighter jets left the VTANG airbase during a "Viper Out" ceremony in South Burlington on Saturday, April 6, 2019. The F-16s arrived in 1986 and are being re-assigned elsewhere to make room for new F-35s at the base. Photo by Glenn Russell/VTDigger

“I’m very proud of the Guard having stayed above it all. We’re not going to roll in the mud,” he said. “But at the end of the day, we have a mission to do.”

A leading F-35 opponent, Roseanne Greco, a retired U.S. Air Force colonel and former chair of the South Burlington City Council, decried the loss of affordable housing near the airport in recent years because of noise levels at the airport. She predicted more housing would be deemed unfit after the F-35s arrive.

“It’s going to be worse, without a doubt,” Greco said in an interview this week. “How much worse we won’t know until they get here.”

Several residents, she said, are having parties to celebrate the departure of the F-16s and several months of “peace and quiet” without any fighter jet training exercises before the F-35s arrive. (The Guard supplied earplugs for Saturday's final fly.)

“The theme is either ‘Ding, Dong, the Witch is Dead,’ or the ‘The Sounds of Silence,” Greco said. She was one of four candidates who ran for adjutant general this year, where the campaign centered on allegations of sexual harassment and other misconduct in a seven-part series by VTDigger. (Among those attending the event Saturday was former Wing Commander Col. Thomas Jackman, who lost his leadership position in 2015.)

Finnegan said the F-35 has more sophisticated technology than the F-16s and that pilots will be able to go places where detection equipment has made it unsafe to fly F-16s. Finnegan described the upgrade in technology between the two planes as significant as “going from a Commodore 64 to an iPad.”

“We want to be able to do the mission and walk away from it,” Finnegan said. “That’s what the F-35 brings to the table for us.”

The F-35 program is the largest and most expensive military program in the country’s history, with the planes costing an estimated $90 million each and more than $1 trillion for operations and maintenance through its expected life of 2070.

The F-16s flown out of Burlington will be redeployed to other military facilities still using the planes. Meanwhile, more than $160 million in upgrades continue at the VTANG airport site in advance of the new planes’ arrival.

Thanks for reporting an error with the story, "Vermont Air Guard F-16s roar into retirement, making way for F-35s"