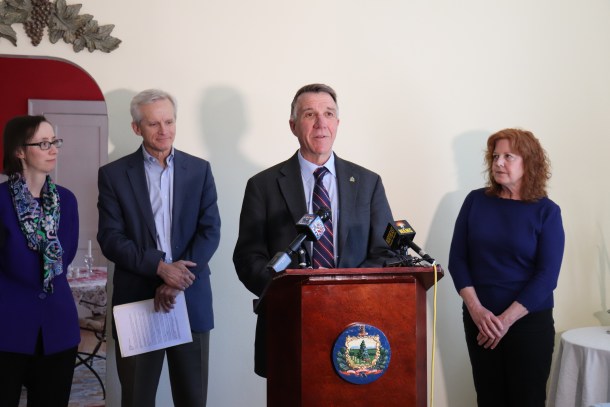 Gov. Phil Scott talks about new incentives for weatherization at a press conference in Burlington on Thursday. Photo by Elizabeth Gribkoff/VTDigger

[B]URLINGTON -- Gov. Phil Scott announced this week that the state’s energy efficiency utilities will be offering low and moderate income Vermonters an additional $500 toward home weatherization.

Burlington Electric Department, Efficiency Vermont and Vermont Gas have partnered with the state’s Agency of Natural Resources, Agency of Human Services and the Department of Public Service to offer the incentive to customers who make less than 120 percent of area median income. The money for the new incentive comes from the Thermal Energy and Process Fuels program, which is funded with revenues from Vermont's participation in the Regional Greenhouse Gas Initiative and the ISO-New England Forward Capacity Market.

At a press conference Thursday in her sunny home in Burlington’s South End, Sally Ross said returning to Vermont after living in the south for seven years had made her more aware of how cold her house was, despite having high energy bills. She said she hadn’t realized just how inefficient her home was until she did an energy audit.

Ross said that while she wanted to have her home weatherized to lower her environmental “footprint,” the estimated $5,000 price tag felt prohibitively expensive. She decided to move forward with the work when she found out that Vermont Gas would pay for a third of the cost and had a $500 bonus incentive she qualified for.

The three efficiency utilities also offer free energy audits and have other weatherization incentives, such as a $2,000 offer from Efficiency Vermont, available for all customers who do retrofits through approved contractors. The utilities have helped weatherize over 10,000 homes since 2008, according to a press release from the governor’s office.

Weatherization became a hot political issue this session when the House narrowly approved a controversial bill that would double the fuel tax that helps fund the state’s weatherization program.

The governor — who does not support the fuel tax increase — said at the press conference that his budget this year includes an additional $500,000 for the state’s low income weatherization program.

Scott said that although heating costs can be a “huge burden” for Vermonters, the upfront investment for weatherization can be a barrier.

"They might know that they need (energy efficiency improvements) but they struggle to do so because they simply can’t afford to do it all at once,” he said.

Heating homes and other buildings accounts for 30 percent of energy used in the state — and 24 percent of greenhouse gas emissions, he said.

The program currently weatherizes around 900 homes a year, according to that report. Geoff Wilcox, weatherization program administrator for the state, said that a $500,000 boost would weatherize around 45 additional homes.

Correction: The source of the the money for the new incentive has been corrected.

Thanks for reporting an error with the story, "Energy efficiency utilities offer $500 incentive for weatherization"