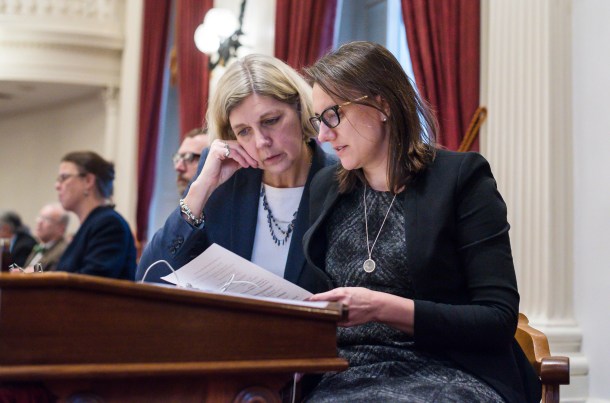 [T]he Vermont House Thursday passed legislation that would enshrine a woman’s right to an abortion without restriction, and which, if enacted as is, may provide the strongest reproductive rights protections in the country.

The legislation, which passed in a second vote of 106-36, and now heads to the Senate, has been a priority in the Democratically controlled House this session.

With the threat of a conservative U.S. Supreme Court overturning the landmark abortion decision, Roe v. Wade, Democrats in the Legislature’s lower chamber have led an effort to swiftly codify the state’s existing abortion practices into law — setting off an emotional public debate in the state.

“With the current makeup of the Supreme Court, our right to this choice, to this freedom, is at risk,” said House Majority Leader Jill Krowinski, D-Burlington, championing the passage of the measure. “This legislation secures Vermonters’ rights.”

Republicans, who believe the measure goes too far in its broad protections, have sought to restrict it this week by proposing more than a dozen amendments, all of which were rejected.

The bill would not explicitly prohibit abortions at any point during pregnancy, giving rise to concerns that it would encourage women and medical providers to carry out late-term abortions.

Democrats say that fear is unfounded, that women simply do not seek out abortions late in their pregnancy unless it is necessary for their health or well being — or for other compelling reasons that should not be subject to government regulation.

There are currently no restrictions on the books in Vermont, and more than 90 percent of the procedures take place during the first trimester of pregnancies. About 1 percent take place in the third trimester.

Vermont medical professionals say they don’t perform abortions in the third trimester unless the procedure is deemed medically necessary.

Republicans once again Thursday attempted to amend the legislation — after having a raft of amendments shot down Wednesday — to restrict access to the procedure at 24 weeks into a pregnancy. 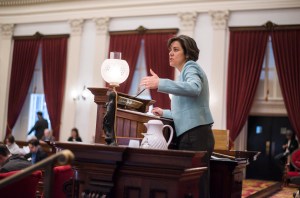 Speaker of the House Mitzi Johnson presides as the House considers an abortion rights bill on Feb. 21. Photo by Glenn Russell/VTDigger

They also sought to add requirements for minors seeking abortions to notify their parents, or receive counseling before it’s performed, both of which were shot down.

After each amendment failed, some legislators said they could not support the unchanged bill.

“This bill seeks to solve a problem that currently in this state does not exist,” Rep. Felisha Leffler, R-Enosburgh Falls, said. “I support choice, but however, to express the will of my constituents, I cannot support this bill.”

Others said they would support it, but with trepidation.

Rep. Cynthia Browning, D-Arlington, said while she supported a woman’s right to chose and would vote for the bill, she wished lawmakers had found some compromise.

“With all rights come responsibility and I feel that in H.57 today, in asserting a woman’s right, I feel that the majority has denied that the other life involved here has any rights at all,” she said.

If H.57 was enacted as written, it would likely become the most expansive law safeguarding reproductive rights in the United States, according to the Guttmacher Institute, a pro-abortion rights research group.

The only other state that protects a woman’s access to abortion without any limitations is Oregon, which passed a sweeping abortion law in 2017. 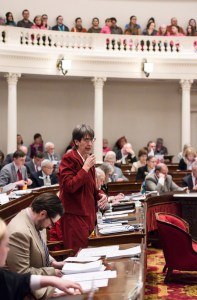 Rep. Anne Donahue offers an amendment calling for parental notification of a minor's pregnancy during debate on the House floor on Feb. 21. Photo by Glenn Russell/VTDigger

Other states that guarantee access to abortions only do so until a fetus is viable — meaning medical professionals determine it could survive outside the womb — unless a mother is facing a health complication. Viability is usually reached about 24 weeks into a pregnancy.

“It goes further than the other states that have laws because those other states typically talk about access to abortion until viability,” Elizabeth Nash, a state policy analyst at the Guttmacher Institute, said of Vermont’s abortion measure.

Nash said Vermont’s law goes even further than Oregon’s law because it explicitly states that the government cannot interfere with an individual’s right to sterilize themselves, obtain contraception or receive an abortion.

“What they're saying is that the government is supporting individuals in making these decisions for themselves,” she said.

The abortion bill now heads to the Senate, where it is expected to see broad support.

Senate President Pro Tem Tim Ashe, D/P Chittenden, plans on introducing an amendment to the state’s Constitution that would also guarantee a woman’s right to abortion.

Gov. Phil Scott has declined to weigh in on the proposal and said he is waiting until the bill reaches his desk before he makes a decision on signing it.

Learn more about the push to protect reproductive rights in Vermont on this week's Deeper Dig podcast:

Thanks for reporting an error with the story, "Vermont House passes what could be strongest abortion protections in ..."