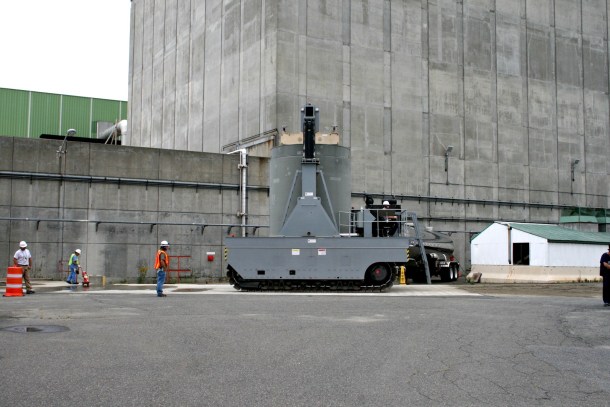 A transporter carrying one 200-ton fuel storage cask leaves Vermont Yankee's containment access building on its way to a concrete storage pad about 150 yards away. Photo courtesy of Entergy

This story by Susan Smallheer was published by the Brattleboro Reformer on Oct. 30.

[M]ONTPELIER — The Vermont Public Utility Commission has put the current and potential future owners of the Vermont Yankee nuclear power plant on notice that it likely won’t issue its ruling on the sale of the closed Vernon reactor this week. Both Entergy Nuclear and NorthStar Group Holdings Company earlier this month had asked for a decision by Wednesday from the state regulators after the NRC gave its approval to the license transfer on Oct. 12. The two companies have been pushing for a quick decision on the proposed sale, and had originally set a deadline of late last year.

And the PUC also said it wasn’t sure it could issue its decision within the 30 days of the NRC ruling, which was requested earlier this summer.

Meanwhile, the Conservation Law Foundation on Monday again filed objections to the sale, noting that the new conditions and financial requirements issued by the NRC earlier in the month were still inadequate to protect the public.

“The Nuclear Regulatory Commission decision incorporated additional financial and structural assurances that address some, but not all, of the shortcomings of the proposed transaction,” wrote CLF senior attorney Sandra Levine, in a filing on Monday.

CLF noted that the NRC had requested additional information and imposed new conditions on the sale including additional bonding and additional financial assurances.

She said the new NRC requirements had “strengthened the overall proposal” but that “many serious shortcomings” remained, including releasing Entergy from responsibility for Vermont Yankee after the license transfer.

Entergy Nuclear, which shut down Vermont Yankee in December 2014, had planned on mothballing the reactor for decades, to let both the radiation dissipate and to let the Vermont Yankee trustee fund grow to reach the $1.2 billion needed to tear down and clean up the contamination at the plant.

But under the plan outlined by NorthStar, the plant would be demolished and cleaned up almost immediately, a plan that eventually won strong support from environmental groups and the Scott administration. Only the Conservation Law Foundation remained unconvinced that enough financial guarantees were in place.

The state regulatory board did agree with Entergy and NorthStar that additional hearings or legal process were not needed after the NRC decision.

Thanks for reporting an error with the story, "State likely won't meet Oct. 31 decision deadline requested by Vermon..."