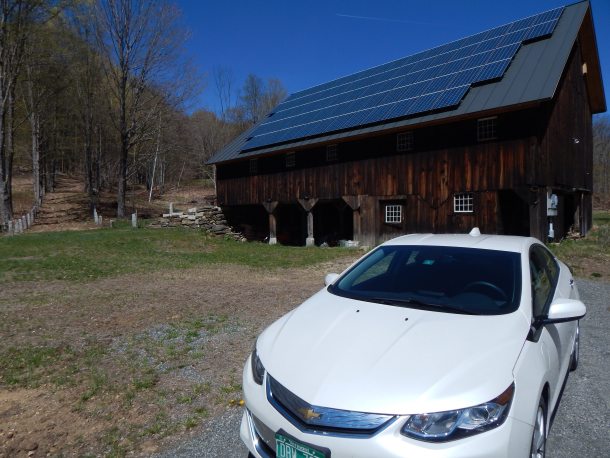 Green building advocate Alex Wilson keeps a plug-in hybrid car and has a solar array on a barn at his Dummerston home. Photo by Mike Faher/VTDigger

[A]s Vermonters cranked air conditioners during July, one of the hottest months on record, solar power in the state was responsible for $1.3 million in energy savings, according to one of the state’s largest renewable energy companies.

Across New England, solar led to almost $20 million in energy savings during the last heat wave, SunCommon said in a report released on Monday. Vermont accounts for about 17 percent of the region’s solar capacity.

“And that’s where I was really surprised, during that heat wave that we looked at, solar reduced those wholesale electric prices by 14 percent” across New England, said Moore. Heat waves lead to surges in electricity demand, mostly from people blasting air conditioner units.

The report calculates savings from “behind the meter” solar, mostly net-metering on households, building roofs or other small projects.

By reducing the amount of electricity utilities have to purchase off the grid during peak energy periods, solar lowers the overall cost of wholesale electricity. Even states that do not have much solar installed, like Maine, still benefit from that decline, said Moore.

“The relatively few customers who have solar on their roof or business have an out-sized benefit…because they’re pulling the price down that everybody else has to pay,” said Moore.

Ed McNamara, regional policy director for Vermont’s Department of Public Service, said that “behind the meter solar has a similar effect as energy efficiency in terms of reducing the amount of energy that has to be produced and paid for through the wholesale market.”

Policies in Vermont require utilities to establish long-term contracts with energy generators, like the Sheffield Wind Farm, that “hedge against wholesale market volatility,” said McNamara. However, the peak caused by extreme heat can mean utilities have to purchase more energy from the region’s grid operator, ISO NE. 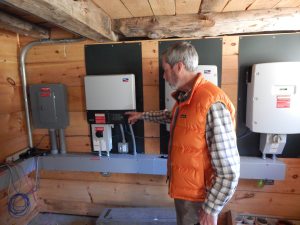 Alex Wilson points out features of the net-metered solar array installed on his barn in Dummerston. Photo by Mike Faher/VTDigger

“Generally when there’s a heat wave, wind is not a great producer,” said McNamara. He added that this means “the region as a whole relies on more gas-fired generation.”

“For the next several years, the increase in solar can provide a valuable resource during heat waves,” he added.

But incentives that have contributed to the rise in Vermont solar are being chipped away at. And for the first time in six years, the state has seen a decline in solar installations.

Changes to the state’s net metering rules and a 30 percent federal tariff on imported solar panels have contributed to that decline, according to a recent report from the state’s Clean Energy Development Fund.

Green Mountain Power, the state’s largest electrical utility, has been one of the players advocating for a decline in the above-market rate paid to net metering customers who feed excess energy onto the grid.

The utility company saved $600,000 during this year’s August 6 regional peak by drawing on energy stored in batteries, like the Tesla powerwall, he said.

“Initial deployment of solar several years ago did a good job of providing value to the peaks and energy up to a point – the largest benefits came early on,” he said. “We now have a shift with peaks pushed later in the day so the solar is less cost effective for customers then.”

There has been a 1,400 percent increase in the amount of net-metered solar installed in GMP’s service area in the past eight years, with a capacity increasing from 10,000 kw in 2010 to 150,000 kw this year, said Kristin Kelly, the company’s spokesperson.

Vermont’s solar sector, which suffered a nine percent decline in installation last year and a nine percent decrease in the solar workforce this year, “was likely overheating,” said Riley Allen, deputy commissioner of the Department of Public Service.

The state needs to develop a “sustainable path” for solar and other forms of renewable energy by ensuring projects are incentivized in the right places, said Allen. “The Vermont electric system is increasingly challenged by the addition of more solar to areas that are already fairly saturated by these resources,” he said.

Larger solar projects generating 150 kilowatts or more must now be built on “preferred sites,” like landfills or unused quarries.

Behn said that because of these changes, “farmers who are struggling these days and have fallow fields can no longer lease their fields” for solar projects.

SunCommon has been installing more commercial solar projects but had a decline in new community solar projects, in which customers with unsuitable home sites chip in to support solar installations elsewhere, said Moore.

He said the new net metering rules have made it much harder for community solar projects to become approved, moving the state in the wrong direction.

“When we look at what’s happening with global warming and carbon emissions, we need to be doing more not less,” said Moore.

Thanks for reporting an error with the story, "Solar creates savings amid heat wave, but industry growth cools"