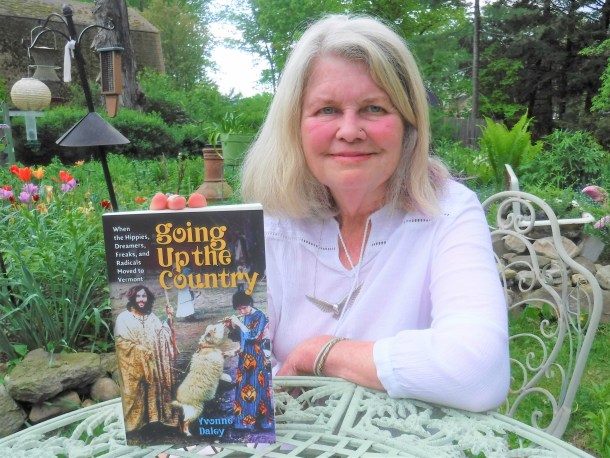 Rutland writer Yvonne Daley is author of the new book “Going Up the Country: When the Hippies, Dreamers, Freaks, and Radicals Moved to Vermont.” Photo by Kevin O’Connor/VTDigger

Rutland journalist Yvonne Daley didn’t know she was receiving her latest assignment when a friend sent her a book about the 1960s and 1970s counterculture in the high desert of New Mexico.

“You should write this story in Vermont,” came the suggestion tucked alongside.

Daley seems the perfect candidate: She not only has penned five books and four decades of articles for publications ranging from her local Rutland Herald to Time and People magazines but also knows the counterculture firsthand, having traded a mainstream childhood in Boston to tend goats and a vegetable garden upon moving to the Green Mountain town of Goshen in 1967.

The result is Daley’s new book, “Going Up the Country: When the Hippies, Dreamers, Freaks, and Radicals Moved to Vermont,” a 288-page paperback just released by University Press of New England.

“This is the story of how thousands of young migrants, largely from the cities and suburbs of New York and Massachusetts, turned their backs on the establishment of the 1950s and moved to the backwoods, small towns and cities of rural Vermont,” the book begins, “spawning a revolution in lifestyle, politics, sexuality and business practices that would have a profound impact on both the state and the nation.”

Daley and her fellow baby boomers weren’t raised to rebel.

“We walked to school in relative safety, played outdoors in any kind of weather, watched American Bandstand after school,” she writes. “But these and other sweet aspects of the era mask the darker sides of a country trying to ignore the horrors of war and poverty, one in which women were relegated to home and jobs, not professions; a time when you were measured by your last name, your occupation, where you worshiped, the color of your skin, the cost of your car and home.”

Daley recalls saying goodbye to her high school sweetheart turned Vietnam War soldier one Easter Sunday, only to learn of his death less than a month later.

“Conformity defined us — and then it didn’t,” she writes of her generation, “And so, some of us said no. No to conformity, to suburbia and the ‘straight’ life, no to haircuts and ties and button-down collars, no to permanents and rollers and bras, no to nine-to-five and church on Sunday, no to segregation and bigotry.”

Daley has spent the past three years interviewing peers who settled everywhere from southern Vermont’s Total Loss Farm (deemed “one of the enduring communes and perhaps the most successful” by the Vermont Historical Society) to such Northeast Kingdom outposts as Earth People’s Park, Frog Run and Mullein Hill. 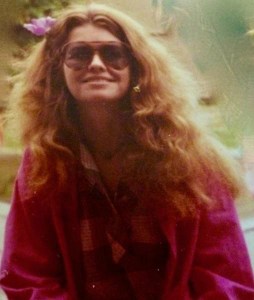 “I wanted to tell stories of people whose stories had not been told,” the author says. “Every time I would interview someone, they would tell me about 10 more people.”

Daley also offers personal perspective. She recalls feeling the pull of Vermont, even though her single childhood memory of it came when her father took a wrong turn during a family vacation in New Hampshire.

“I felt the belief to go back to the land,” she says. “Start over. Simplify.”

“We were kids from the suburbs. We didn’t know how to grow a tomato plant. What we were thinking?”

Daley learned, her gargantuan backyard garden attests. Many fellow transplants who stayed also found success, be it hippies turned household names Ben & Jerry or Bernie Sanders. But the author is careful to extend credit to longtime locals with deep roots.

“I think many of the values the counterculture had were already inherent in Vermont,” she says. “Even though there was some blowback, we were treated so graciously and taught so much.”

Adds fellow journalist Tom Slayton in the book’s foreword: “Waves of immigrants from French Canada, Italy, Sweden, Scotland, Germany, and, most recently, eastern Europe and the Middle East, have transformed the state’s pedigree over and over again,” he writes. “The countercultural ‘invasion’ of the 1970s was simply one more influx of immigrants, one that, like previous waves of newcomers, encountered some suspicion and resistance at first, but was accepted and ultimately welcomed.”

The author knows not everyone is pleased with the seeds of change she and her peers sowed.

“There are, of course, scores of Vermont residents, both native and transplant, who do not welcome gay marriage or environmental regulation or any of the myriad other changes that are associated with the counterculture,” she writes. “Yet even they will concede that the very character of Vermont, a place that has always honored independence and the right to be different, a place whose residents have always been grounded by weather and the land, remains strong.”

Daley is set to share her book in a statewide tour detailed on her website, with events June 7 in Rutland, June 9 in St. Albans, June 12 in Middlebury, June 14 in Burlington, June 16 in Shrewsbury, June 19 in Montpelier, June 21 in Brandon, June 22 in Manchester, June 26 in Londonderry, June 28 in Brattleboro, July 12 in Bennington, July 19 in Chittenden, July 24 in Hardwick, July 28 in Woodstock and Aug. 12 in Mount Holly.

Thanks for reporting an error with the story, "Book review: How Vermont hippies sowed the seeds of change"