Editor's note: This commentary is by Garrison Nelson with Jane E. Stromberg. Nelson is the Elliott A. Brown Green and Gold Professor of Law, Politics and Political Behavior at the University of Vermont. His latest book, "John William McCormack: A Political Biography," was reviewed in October in VTDigger. Stromberg is a junior at UVM studying political science and environmental science. She is president of UVM's student Renewable Energy Network.

[T]he news stunned the state and embarrassed us all. On March 21, Mississippi Gov. Phil Bryant, who weeks earlier had signed the most restrictive anti-abortion law in the country, named state agriculture Commissioner Cindy Hyde-Smith to fill the soon-to-be vacant U.S. Senate seat of Thad Cochran.

Hyde-Smith’s appointment was announced by Gov. Bryant standing in front of the Mississippi state flag, the only one still fully adorned with the Confederate Stars and Bars. With Mississippi now having seated a woman in the U.S. Congress, were there any states left that had yet to seat a woman in either the U.S. House or the U.S. Senate? Yes, there was one – Vermont. National newspapers chuckled over the fact that Vermont, the highly progressive New England state had never placed a woman in a congressional office.

Were the states alike? No. Vermont’s political contrast with Mississippi could not have been more distinct. Historically, Vermont had voted Republican in 27 consecutive presidential elections from 1856 to 1960, until 1964, when Democratic President Lyndon Johnson defeated Arizona U.S. Sen. Barry Goldwater. Conversely, that was the same year that Mississippi cast its electoral votes for Goldwater, the first Republican nominee to capture the state in the 22 elections from 1876 to 1960. Since then, Mississippi has cast its electoral votes for Republicans in 12 consecutive elections from 1972 to 2016 while Vermont has cast its votes for Democratic nominees Bill Clinton twice, Al Gore Jr., John Kerry, Barack Obama twice, and Hillary Clinton, seven consecutive victories. Mississippi has become deep red while Vermont has become deep blue, reversing their ancient histories.

A similar contemporaneous contrast between the two states appears in the Gallup Poll’s 2017 assessment of ideological composition. With 46 percent of its residents self-identifying as conservative and only 15 percent as liberal, Mississippi ranks second in the nation, trailing only Wyoming. By contrast, Vermont’s 26 percent conservative score ranked it 49th on the conservative scale, behind Massachusetts, while its 40 percent liberal identifiers placed it at the top of that list.

The contrast between the two states extends to two of the constitutional amendments on civil rights. Vermont ratified the anti-slavery 13th Amendment on March 8, 1865; barely a month after Illinois first ratified it, while Mississippi took 130 years to ratify it on March 16, 1995, the last state to do so. This is no surprise for a state that was the second to secede and had the second highest pre-Civil War proportion of slaves (55.2 percent) and the highest post-Civil War proportion of elected congressional segregationists. Vermont by contrast, banned slavery in its 1777 constitution.

Similarly, the 19th Amendment granting women the right to vote was ratified by Vermont on Feb. 8, 1921, 16 months after Wisconsin ratified it first on June 10, 1919. Once again, Mississippi came in dead last, finally ratifying the 19th Amendment on March 22, 1984, 64 years after it became part of the Constitution. Furthermore, Vermont and Arizona have the highest percentage of women serving in the state legislature – 40 percent while Mississippi ranks 47th with only 14.9 percent.

With these dramatic contrasts, there must be an explanation for why Vermont has lagged so far behind the nation in sending women to the U.S. Congress. There appear to be four reasons that have converged to place the state in this anomalous condition.

• Constitutional constraints. There are only three members in Vermont’s congressional delegation -- two senators and one representative -- tied for last in the U.S. with Delaware, North Dakota, South Dakota, Montana, Alaska and Wyoming. What this means is that there are only five elections every six years – one for each of the two senators and three for the U.S. House leading to minimal opportunities.

• Congressional longevity. Vermont’s congressional delegation has the greatest longevity in years of service. That can easily be seen by examining the congressional careers of five of the best known members of the delegation whose collective service in Congress averaged 32.4 years. These offices seem to come open only once every generation, further limiting opportunity. 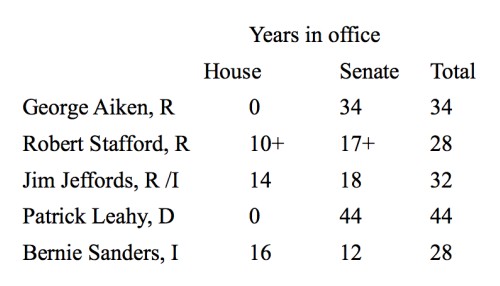 • Incumbency advantage. NO Vermont U.S. senator has lost a general election since the passage of the 17th Amendment in 1913. Only Hawaii can make the same claim. There have been only two U.S. House incumbent defeats in Vermont – Democrat Bill Meyer, who lost to Republican Bob Stafford in 1960, and Republican Peter Smith, who lost to independent Bernie Sanders in 1990. Both Meyer and Smith were first-termers and had yet to reap the advantages of incumbency.

• Vermont’s major parties do not nominate women to run for congressional offices. Vermont held its first popularly elected U.S. Senate contest in 1914 for the Senate Class 3 seat. Since then there have been 18 Class 3 regular elections and three special elections – 1923, 1934 and 1940 with 21 Republican and 20 Democratic candidacies (George Aiken had both 1968 nominations). The Senate Class 1 seat first popularly elected in 1916 has had 17 regular general elections and two special elections – 1931 and 1972 – with 19 Republican, 17 Democratic and two independent candidacies of Bernie Sanders, running as the de facto Democratic nominee in 2006 and 2012. Of those 79 major party candidacies, 78 were male (98.7 percent) and the only woman with a major party Senate nomination was Democrat Jan Backus, who lost to Jim Jeffords in 1994.

Since 1920 when the 19th Amendment first granted the vote to women, there have been 49 biennial regular House elections and a special one in 1972. In six of those, 1920-30, Vermont elected two U.S. representatives. The 1930 Census eliminated the second House seat. From 1920 through 2016, there have been 114 major party candidacies – 54 Republicans, 49 Democrats, nine independents (Sanders), and two semi-competitive third party candidacies (Robin Lloyd of the Citizens Party in 1980 and Erica Clawson of the Liberty Union in 2016).

Republicans Bob Stafford in 1968 and Jim Jeffords in 1986, as well as Democrat Peter Welch in 2008 and 2016, had both major party nominations. With no serious Democratic rivals in 1990, 1994, 1998 and 2002, independent Sanders became the de facto Democratic candidate running against the Republican nominees.

All told, among the 114 competitive House nominees, 108 men were candidates for major party nominations (94.7 percent) while only six women received serious House nominations (5.3 percent) – three Republicans – Susan Sweetser in 1996, Karen Kerin in 2000, and Martha Rainville in 2006; one Democrat – S. Marie Dietz in 1978; and two credible third party contenders, the afore-mentioned Robin Lloyd in 1980 and Erica Clawson in 2016.

Combining the U.S. Senate and U.S. House general and special elections in Vermont, there have been 193 candidacies, of which 186 were men (96.4 percent) and only seven women (3.6 percent).

There is no shortage of available Vermont women who could run for federal offices, but apparently choose to run for state constitutional offices. Among the better-known are Republican Consuelo Northrop Bailey, who in 1955 became the first female elected lieutenant governor in the country. Burlington Democrat Madeleine Kunin was the state’s second female lieutenant governor, 1979-83, its first female governor, 1985-91, the nation’s first three-term woman governor, and later deputy secretary of education under President Bill Clinton. The next woman to hold the lieutenant governor’s post was Republican Barbara Snelling, 1993-97, widow of five-term governor Richard B. Snelling.

Among the down-ballot state offices, Vermont’s first female secretary of state was Republican appointee Helen Burbank of St. Johnsbury, who served from 1947 to 1949 but chose not to run for election. The first elected female secretary was Democrat Deborah Markowitz, who served from 1999 to 2011 but lost the 2010 gubernatorial primary to Peter Shumlin. Other women statewide office holders include state Treasurer Democrat Madelyn Davidson, a 1968 appointee who lost her election in 1970; Treasurer Stella Hackel, 1975-77, who became director of the U.S. Mint, 1977-81, under President Jimmy Carter; Auditor of Accounts Elizabeth Ready, 2001-05; and present state Treasurer Beth Pearce, 2011-date. So far, there have been no women attorneys general. While Hackel, Kunin, Snelling and Markowitz sought the governorship, none sought federal elective office.

There is another pipeline for Vermont women who wish to run for Congress – the state Legislature. Since the federal and state chambers are both legislative bodies, there would only be a minimal learning curve. As noted earlier, Vermont and Arizona have the highest percentage of women serving in the state legislature – 40 percent. There are an ample number of future congressional office-holders among them. Certainly, recent Vermont House Speakers Gaye Symington and Mitzi Johnson spring to mind.

Vermont abounds in talented women with political ambitions. For those women, it is now time to follow the advice of Sheryl Sandberg, the doyenne of Facebook, and to “lean in” and run for federal office. For leaders of the state’s political parties, it is well past time to diversify your candidate offerings to the state’s voters and to support capable and electable female political contenders.

Fellow Vermonters, we should no longer wish to ever be mentioned in the same sentence with Mississippi.

Thanks for reporting an error with the story, "Garrison Nelson & Jane Stromberg: Vermont -- the Mississippi of ..."