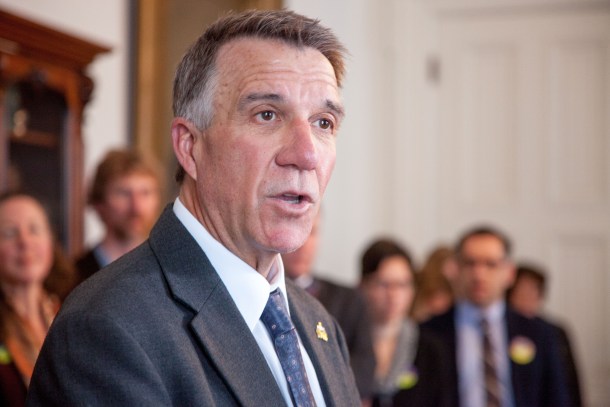 [G]ov. Phil Scott says he would like to sign a package of gun bills all at once now that the last two have cleared the House and Senate.

Together, the three pieces of gun legislation recently passed by the Legislature impose landmark restrictions on guns in Vermont and allow for authorities to seize firearms in dangerous situations.

Scott said his office has not officially received any of the three bills, but that he expected to receive them soon and would then schedule a public signing within five days.

“My plan would be, if everything goes right, to have all three bills and have one signing of all three,” Scott said.

Neither bill generated any debate Thursday on either floor.

Both of those bills are aimed at taking firearms out of the hands of those who pose a risk of harm to themselves or others.

A more divisive bill that cleared the Legislature on Friday, S.55, makes more sweeping changes to the state’s gun laws and has prompted threats of lawsuits from gun rights groups.

That legislation increases the age to purchase a firearm to 21, expands background checks to private sales, bans bump stock rapid-firing devices, and limits magazine size on handguns to 15 rounds and 10 rounds for rifles.

The flurry of gun legislation in a state that had been known for having little restrictions on firearms came after the governor said in mid-February he was “jolted” by details revealed in an affidavit supporting the arrest of an 18-year-old Poultney man in foiled school shooting plot.

Scott, who had previously said no changes were needed to the state’s gun laws, said after reading that affidavit that “everything’s on the table.”

Gun legislation that had been dormant in the Legislature, including the widening of background checks to private firearms sales, jumped to the forefront of the agenda.

Other gun legislation also moved swiftly through the Legislature.

S.211, known as a “red flag” bill, allows law enforcement to seize guns from a person deemed an “extreme risk” to themselves or others.

Supporters of the bill say it gives law enforcement a means to act in cases where a person is on the verge of violence or suicide, or set on causing mass casualties, such a school shooting.

The legislation allows for a judge to issue an “extreme risk protection” order permitting firearms to be held for a 14-day “cooling off” period.

It also establishes a procedure for a court to extend that time. Under the Senate bill, that extended period would have run 60 days. The measure passed by the House called for a six-month period.

The Senate on Thursday voted to “concur” with the change in the legislation. The House kept in a provision backed by the Senate that required a judge to find “clear and convincing” evidence before extending the seizure of a person’s firearm. There had been talk of the House changing that to a lower standard, to a “preponderance of the evidence.”

H.422 allows law enforcement to confiscate firearms from people cited or arrested on domestic violence charges. The Senate passed that bill unanimously last week and the House voted to “concur” Thursday. The House passed a version of that legislation last year.

Backers of H.422 say it gives authorities the ability to take action and prevent domestic violence from turning fatal in ways that S.221 doesn’t, allowing a firearm to be seized at a scene until a suspect’s arraignment the next business day when a judge can rule on the matter.

Gun rights advocates have supported S.221, citing the due process provisions included in the legislation. However, they are less supportive of H.422, which they say lacks such due process in the initial decision to seize firearms.

Scott’s decision to publicly sign the gun legislation differs from his signing of another controversial piece of legislation earlier this year, the legalization of the recreational use of marijuana.

Thanks for reporting an error with the story, "Scott plans public signing as more gun bills clear Legislature"

Yves Dubief: Invest in schools’ indoor air quality for Covid and beyond