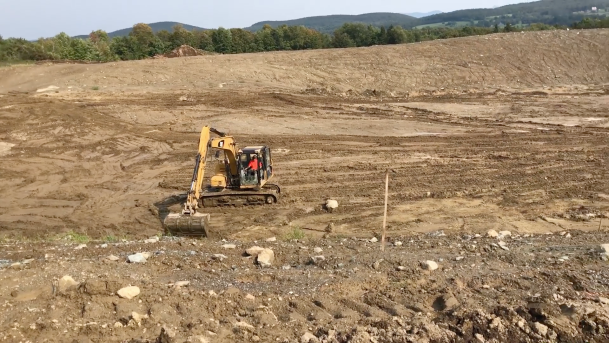 Pleasant Valley Farms built one of the state’s largest farming operations last year, in one of Vermont’s most polluted watersheds, without a permit, according to documents obtained by VTDigger.

The only action taken thus far by the state’s Agency of Agriculture, which is responsible for regulating Vermont farms and has the enforcement authority to address the state’s worsening problem of water pollution resulting from farming, has been to request that the owners apply for the permit retroactively.

Pleasant Valley Farms is now in the process of obtaining the permit it should have obtained prior to last year’s expansion project, on a plot of land the state is calling the Lumbra Farm.

Agency of Agriculture officials say they first learned of the illegal operation in October 2017. They won’t say whether they plan to penalize Pleasant Valley Farms, which is owned by the St. Pierre family, which includes Amanda St. Pierre, executive director of the Vermont Dairy Producers Alliance, a dairy lobby.

After publication of this article, the agency provided a certificate of inspection showing that Pleasant Valley Farms was allowed to start shipping milk on January 16. Agency spokesperson Scott Waterman said officials had checked with local distributors and determined that the farm had not been selling milk up to that point.

Pleasant Valley Farms oversees one of the state’s largest dairy operations. The Richford-based operation has more than 5,000 cows, calves and heifers in six confinement structures at several locations across Franklin County, all within the Missisquoi River Basin, which drains into heavily polluted Missisquoi Bay.

The bay, according to the Environmental Protection Agency, is one of the most heavily polluted sections of Lake Champlain. Lake Champlain is under a federal order requiring the state to dramatically cut farm pollution, at an estimated total cost of $2 billion over the next 20 years.

As a result of last year’s expansion, the Lumbra Farm portion of Pleasant Valley Farms is now considered a large farming operation, which is one large enough to hold more than 700 cattle, according to Agency of Agriculture records. Agency officials said there are fewer than three dozen farms of that size in the state.

Also at some point last year, Pleasant Valley Farms built a new pit to hold liquid manure. The manure pit, which has a capacity of millions of gallons, and the expanded Lumbra Farm facility, are located four miles from Lake Carmi, which was closed last year because of toxic green algae blooms that as largely been caused by phosphorus pollution from farms.

An operation on the scale of the Lumbra Farm requires a Large Farm Operation permit, in which owners must demonstrate that they have taken necessary steps to prevent water pollution, among other requirements.

This permit, and the “nutrient management plan” (a farm-pollution control plan) required in the permit, are among the key tools in the Agency of Agriculture’s effort to cut farm pollution. All but the very smallest farms in Vermont are required by law to obtain the permits before operating.

Secretary of Agriculture Anson Tebbetts has the authority to take a wide range of actions to ensure that farmers obtain permits, and meet certain conditions before moving forward with operations. The agency can issue cease and desist orders against farms, require corrective action, take violators to court, assess administrative fines, revoke other permits or certifications held by the owners, or turn the matter over to the Agency of Natural Resources for enforcement.

In the case of Pleasant Valley Farms, the Agency of Agriculture has done none of the above. Instead, agency officials said Friday that they’ve given Pleasant Valley Farms until next month to retroactively submit an application for the Lumbra Farm’s new Large Farm Operation permit.

Amanda St. Pierre declined to be interviewed by telephone because, she said, farmers are misrepresented in the media. She asked for questions via email, but did not respond to emailed questions. The Vermont Dairy Producers Alliance, of which she is executive director, celebrated its one year anniversary last August.

Asked about his agency’s oversight of the St. Pierre family operation, Tebbetts said there are too many farms in the state for him to keep tabs on each individually, and referred specific questions to agency employees.

Agency records show that Tebbetts wrote Agency of Natural Resources Secretary Julie Moore a detailed three-page letter in January to update her on technical and legal details of the permit status of Pleasant Valley Farms.

Laura DiPietro, deputy director of the agency’s Agricultural Resource Management division, said agency representatives have visited the site but have not been inside the animal-confinement structure.

The Agency of Agriculture has authority to inspect the building’s interior, even if that requires a search warrant, according to a November 2017 letter Thea Schwartz, of the Attorney General’s Office, sent to Pleasant Valley Farms’ attorney.

Because Lumbra Farm has not been inspected, producing milk there would illegal, according to another letter from Schwartz dated Dec. 21, 2017. Dipietro said agency officials don’t know whether milk is being produced at Lumbra Farm. She said the agency is not investigating to determine whether milk has been illegally produced at the Lumbra Farm.

Agency of Agriculture officials said in correspondence obtained by VTDigger that they didn’t know the facility had expanded until they were told about it in October by Michael Colby, president of farming-advocacy group Regeneration Vermont. Colby shared the documents he obtained about the farm with VTDigger.

Those records, which include email exchanges between attorneys for the farm and attorneys for the agency, show that after the expansion the Pleasant Valley Farms attorney told the Agency of Agriculture that Lumbra Farm was a “small farm,” meaning it held no more than 199 cows.

DiPetrio confirmed that a permit should have been obtained prior to its expansion, but was not. Asked what the agency would do about the failure of the St. Pierres to obtain a permit, DiPetrio said there was a “penalty matrix” for farming offenses. She did not say whether any of those penalties would be applied to Pleasant Valley Farms.

Tebbetts has testified at the Statehouse in recent weeks about the work being done by his agency, and whether new legislation could strengthen state oversight of farms. The secretary has said that his agency’s regulation of almost 800 dairies under its oversight is “working”. Asked if there were additional measures the agency could take to rein in farm pollution, the secretary said nothing came to mind.

“It’s very difficult to answer, because all the things we have thought about are under regulation already,” Tebbetts told lawmakers.

Tebbetts said Friday that he meant these statements in the general sense, and not in reference to any specific farming operation.

This is not the first time Pleasant Valley Farms has come under state, or federal, scrutiny.

It was fined $14,000 by the Vermont Attorney General’s Office late last year for a separate infraction in which the farm illegally discharged agricultural waste into Godin Brook, which drains into Missisquoi Bay.

That incident turned Godin Brook red with the volume of waste, according to documents filed by Assistant Attorneys General Laura Murphy and Robert McDougall. Tebbetts referred to this infraction in his January letter to Moore about Pleasant Valley Farms.

The farm also has run afoul of the U.S. Food and Drug Administration. In a warning letter sent in 2015, the FDA said investigations had found “that you hold animals under conditions that are so inadequate that medicated animals bearing potentially harmful drug residues are likely to enter the food supply.”

The farm was warned for its failure to “maintain complete treatment records” for failing “to systematically review existing treatment records prior to offering a treated animal for slaughter as human food.”

“As a producer of animals offered for use as food, you are responsible for ensuring that your overall operation and the food you distribute is in compliance with the law,” the letter said.

Pleasant Valley Farms received a similar warning from the state in 2011, regarding drug residues found in its milk.

Lumbra Farm is located in a watershed that drains into the Missisquoi Bay, which is the second-most polluted portion of Lake Champlain, according to the Environmental Protection Agency. The farm also is four miles from Lake Carmi, which is regarded as the most polluted lake in the state.

Farms are the single greatest contributors of pollution into both lakes, and both Lake Carmi and Lake Champlain are under federal orders requiring the state to dramatically reduce the rate at which farmers pollute them. Lake Carmi is the impetus for a proposed bill that would declare it “in crisis” and require state agencies to take urgent action to clean it up.

“ANR shall retain responsibility for evaluating the effectiveness of agricultural pollution-control programs in attaining water-quality standards,” the agreement says.

Farming advocates say Tebbetts is not doing his job.

“Anson Tebbetts needs to stop working for the 30 [large farming operations] that are polluting Vermont, and start working for all of Vermont,” Colby said.

Colby said part of the problem was that the agriculture secretary is also called on by statute to promote and encourage farming, while simultaneously regulating the industry. He said Tebbetts, who previously worked in television, was focusing too much on the promotion side of his job.

“He’s no longer producing puff pieces for the local news, he’s a regulator and an enforcer, and the people of Vermont are looking for him to step up and do his job,” Colby said.

Thanks for reporting an error with the story, "A dairy expands near polluted lakes, putting regulators to the test"

Vermonters gather across Burlington for the first city-organized Juneteenth celebration