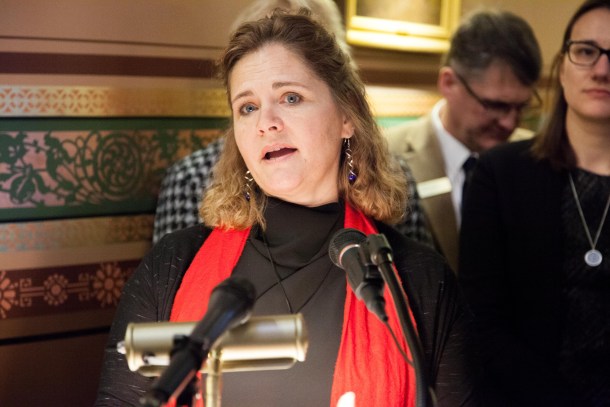 Sexual harassment is harming the ability of women to earn a living, advocates say, and new legislation will give them the added protections they need to combat misconduct in the workplace.

Cary Brown, the head of the Vermont Commission on Women, says sexual harassment has made “it difficult, or even impossible, for women to do their jobs.” When women speak up, they are often forced out of jobs, and even careers, Brown said.

Brown cited several examples, including a welder who called the commission when a coworker asked her to take a shower with him. When she complained, Brown said she was moved “to a less desirable department” and earned less pay. Another woman working in retail complained about a coworker who made overt sexual comments and who wanted to take photos of her breasts. When she complained, her manager blamed her.

“Let’s be clear sexual harassment is an economic issue,” Brown said. “Every time a woman cuts back her hours or takes a day off from work or is driven out of her job entirely, her family suffers financially.”

The Vermont Commission on Women, several business groups, the Vermont ACLU and the office of the Vermont Attorney General, support, H.707, a bill that is designed to curb abuse, encourage women to file complaints and provide whistleblower protections to women who speak out about ongoing harassment in the workplace.

Rep. Sarah Copeland-Hanzas, D-Bradford, spearheaded the effort with the support of more than 56 lawmakers. The national #MeToo movement has galvanized the Legislature to take action to protect workers in Vermont, she said.

“This bill will offer a way to make real change for every worker in Vermont,” Copeland-Hanzas said. “This bill will remove the curtain behind which harassers have hidden their crimes and will offer a place workers can go to find the help they need to say to their harasser, ‘no thanks’ to unwanted sexual advances.”

At a press conference Thursday, the civil rights division of the AG’s office, which investigates sexual harassment claims, could not provide data about the number of complaints and investigations that have been filed with the Vermont attorney general.

The legislation sets up a hotline at the AG’s office and gives the attorney general more resources to track harassment data.

The state is not immune to this issue. Fifty-two sexual harassment state worker complaints have been investigated by the Vermont Department of Human Resources since 2014.

The legislation would also prohibit employers from requiring new employees to sign a non-disclosure clause with regard to sexual harassment.

The deputy Vermont attorney general, Josh Diamond, drafted a sexual harassment non-disclosure form in 2012 for his stepbrother Glenn Robinson, who is now under investigation by the Professional Responsibility Board for his involvement with two former employees and a client.

Thanks for reporting an error with the story, "Bipartisan coalition of Vermont lawmakers backs #metoo legislation"