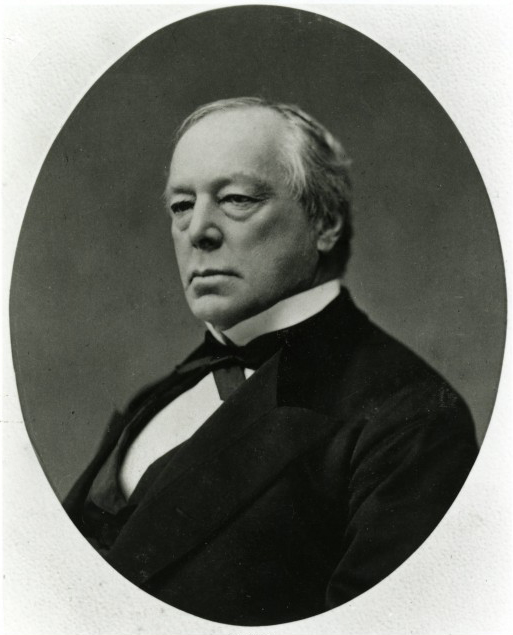 Joseph Battell in a photo taken circa 1900, when he was 61 years old. Wiki Commons image

(“Then Again” is Mark Bushnell’s column about Vermont history.)

[J]oseph Battell earned his money the old-fashioned way: He inherited it. While some scions jealously guard the wealth bestowed upon them, Battell shared his good fortune. His love of nature made Battell Vermont’s largest landowner during his lifetime. Upon his death, his will made him probably the state’s greatest philanthropist.

Battell started life with distinct advantages. He was born in Middlebury in 1839, the son of Philip Battell, a prominent lawyer who contributed both his money and time to community efforts. Philip Battell was himself a scion. The money behind the Battell name apparently came from Philip’s father, also named Joseph, who was a wealthy merchant in Norfolk, Connecticut, who set a strong example with his public mindedness.

The younger Joseph Battell had equally prominent relatives on his mother’s side. Emma Hart Seymour, a native of Middlebury, was the daughter of Horatio Seymour, who served as U.S. senator from Vermont for 12 years. Emma met Philip when he was a student at Middlebury College. Whatever she passed on to her son, however, must have been due to her nature more than her nurture — Emma Seymour died when her son was only 2 years old.

In many ways, Joseph Battell retraced the basic path of his father’s life, though he skipped the part about becoming a lawyer. Like his father, Battell attended Middlebury before settling in the town to become one of its leading benefactors. Where his father dabbled in literature by starting a literary magazine, Battell made himself editor and publisher of the Middlebury Register newspaper. Both men also shared an interest in the fast-changing field of science.

What seemingly set Battell apart was his passion for the natural world. During college, Battell had suffered exhaustion, “weak lungs,” his doctor said. At his doctor’s suggestion, he spent a weekend at a farmhouse in nearby Ripton. Battell was so taken with the beauty of the surrounding hills that he rented a room in the house and soon decided to buy it.

But he wasn’t interested in keeping the place to himself. Instead, he made an open invitation to friends to visit. Soon, the place felt more like an inn than a farmhouse, and that’s exactly what Battell turned the place into in 1870. The Breadloaf Inn, as he named it, grew steadily. When Battell needed more rooms, he simply hired carpenters. He told them only the general idea of what he had in mind and let them fill in the details.

The inn became a popular destination. Battell had his staff provide food far finer than guests expected in a remote Vermont country inn. Prices were reasonable. In fact, Battell often neglected to present guests a bill, preferring to make up any shortfalls out of his own pocket. The only risk guests ran was getting trapped in conversation with the owner on some abstruse scientific point, perhaps about the corpuscular theory of sound, a favorite topic.

But guests weren’t a sufficient audience. To further express his thoughts about sound theory, trigonometry, sleep, death and other subjects, Battell wrote a two-volume work. He made the odd decision to explore these subjects in the form of a novel, “Ellen, or Whisperings of an Old Pine.” Over the course of more than 1,300 pages, Battell contrived to have an idealized female intellectual periodically climb a hill near her home to explain what she was learning in college, to a tree, who is the book’s narrator.

“And now, Mr. Pine,” Battell has his heroine say at one point, “Ellen will criticize the theory of sound which has been accepted substantially by all the scientists, and for some centuries has been taught and is now taught in nearly if not every school and college on earth.”

One recent online reviewer of the book summed it up this way: “Self-published, mind-bogglingly tedious, hilariously phallic, with a weird amount of algebra.” 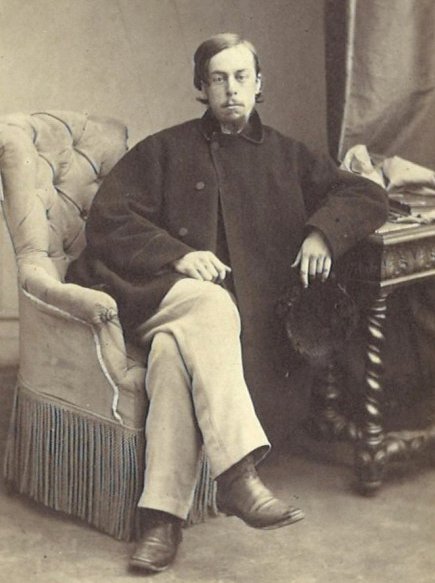 The philanthropist as a young man. Courtesy photo

Fortunately for Battell, and the state, he had the resources to fulfill his greatest passion, conserving Vermont’s natural beauty. One day while at his inn, Battell is said to have watched in horror as a logger cut trees in a nearby woodlot. The state was 80 percent deforested at the time and loggers were doing almost no replanting. Battell agreed with what his fellow Vermonter George Perkins Marsh had written half a century before about humans’ often disastrous impact on nature.

Battell approached the logger and bought the woodlot on the spot. It was the beginning of a career in conservation as Battell used his great wealth to buy up all the land visible from his inn, a swath of land running from Brandon to Waterbury.

In addition to purchasing land – he would eventually amass more than 34,000 acres – Battell railed against lumber companies as “timber butchers.” But he knew they played an important role in the state’s economy. Careless cutting made no economic sense, he argued. It jeopardized two key sectors – the timber industry as well as the nascent tourist trade. Battell wanted the state to start buying prime timberland and manage it properly. He pushed the issue while serving in the state Legislature for eight years.

Battell also found time to agitate on other issues he considered vital. He feared that the state’s famed Morgan horses would disappear unless selectively bred, so he purchased a 500-acre farm in Weybridge to do so.

He saw another threat to his beloved horses, the so-called horseless carriages, or automobiles, that were becoming popular at the start of the 20th century. He used the pages of his Middlebury Register to protest against the arrival of these unwelcome menaces. He collected stories from the region’s newspapers about car crashes to highlight the threat – particularly to women and children – and printed them in the Register.

“Let the owners of the highway dragons build their own roads,” stormed Battell. “It is impossible that highways can be used with safety and comfort by the two methods of travel.”

Battell hated automobiles so much that he tried, unsuccessfully, to pass a state law banning car traffic on the Hancock-Ripton Road, which not coincidentally ran past his inn. Exasperated that he could find no other way to stop the flow of cars, Battell took to erecting barriers and spreading debris in the road near his inn – that is, until the Legislature learned of his actions and made such behavior criminal.

At first glance, Battell’s activism can seem as eccentric as the man. But the beliefs he championed – excluding his stance on sound theory, perhaps – were about conserving the Vermont into which he had been born.

During his later years, Battell, who never married, began to give away his possessions. In 1905, he donated his Morgan horse farm to the U.S. government. In 1910, he gave the State of Vermont a particularly choice bit of property, the top of Camel’s Hump.

Upon his death in 1915, Battell gave Middlebury College the rest of his holdings, roughly 30,000 acres. Twenty-one years later, the school would sell 21,859 of those acres to the U.S. government as the initial core of the now 629,000-acre Green Mountain National Forest.

Blessed with a fortune, Joseph Battell chose to spend it in a way that mystified some of his contemporaries. He explained his purchasing decisions this way:

“Some folks pay $10,000 for a painting and hang it on the wall where their friends can see it, while I buy a whole mountain for that much money and it is hung up by nature where everybody can see it and it is infinitely more handsome than any picture ever painted.”

Thanks for reporting an error with the story, "Then Again: Joseph Battell, Vermont’s greatest philanthropist a..."