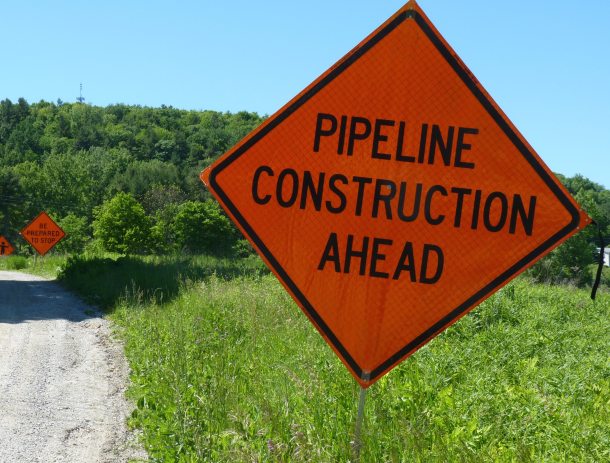 State regulators are investigating whether Vermont Gas Systems buried a pipeline in Addison County as deeply as required by its permit.

The attorney who requested the investigation said the pipeline burial depth was too shallow in numerous locations.

The pipeline’s 2013 permit required it to be buried at least four feet deep in a 2,500-foot section near New Haven, but in at least 18 locations along that length, the pipe was not buried that deeply, which Vermont Gas has acknowledged. The pipeline was completed in April.

It’s buried under as little as three feet of earth in spots along parts of that stretch, the Department of Public Service has claimed. Department officials have said that the pipe is nevertheless buried deeply enough to be safe.

Vermont Gas representatives have filed a request with the Public Utility Commission (formerly the Public Service Board) asking for a retroactive amendment to the pipeline permit that would treat the burial-depth discrepancy as an insubstantial change from the original permit’s terms.

The commission on Friday opened an investigation into whether the burial-depth discrepancies are insubstantial, as Vermont Gas claims.

But the attorney who requested this investigation now claims he has evidence that Vermont Gas failed to meet burial depths required in the pipeline’s permit at far more locations than the 18 that the commission is looking into.

Jim Dumont, a Bristol lawyer representing pipeline opponents, filed a second request asking the Public Utility Commission to expand its investigation to include the pipeline’s burial depth beneath waterways and beneath residential areas. Dumont said he and others have found documents that appear to show Vermont Gas didn’t bury the pipe in these areas as deeply as the permit required as well.

Vermont Gas spokeswoman Beth Parent repeated the same answer twice when asked if the pipeline was buried deeply enough.
Parent said only that “this pipeline is built safely and adequately, period.”

She added: “We’re proud of the work we’ve done” in providing Addison County residents with the option of buying the company’s natural gas.

Federal pipeline regulations generally require the pipe to be buried at least three feet underground, and Parent has said before that the pipeline does meet that standard.

Dumont said it was on the town of Monkton’s website where he and his clients found the construction documents that appear to show the burial-depth discrepancies.

Jim Porter of the Department of Public Service said that he can’t comment on Dumont’s new allegations, but said the department is unaware of any deviations from the pipeline permit other than the 18 now under investigation.

The commission has asked VGS to provide by mid-August evidence and certification attesting to the pipeline’s true burial depth. Porter said the department’s waiting until then to decide what its next moves will be.

“We’re looking forward to this investigation playing out, and we trust at the end of the investigation we’ll be where we need to be,” Porter said.

This new discovery continues a pattern stretching back to at least 2013, Dumont said, when Vermont Gas underestimated the pipeline’s cost and failed to report to the PSB that the pipe’s costs would significantly exceed original estimates.

The board fined VGS $100,000 in that case, but the missteps that led to the fine have continued, he said.

“It looks like, this was a huge project, and this little company just wasn’t up to it,” Dumont said. “They don’t have experience doing projects like this.”

Vermont Gas is one of two Vermont subsidiaries of $7 billion Quebec energy giant Gaz Métro, the other being the state’s largest electric utility, Green Mountain Power.

Thanks for reporting an error with the story, "State regulators investigate Vermont Gas pipeline burial depth"

Virus in Vermont: Single dad, a refugee with six children, homeless in a pandemic

Virus in Vermont: A teenager combats Covid on the front lines