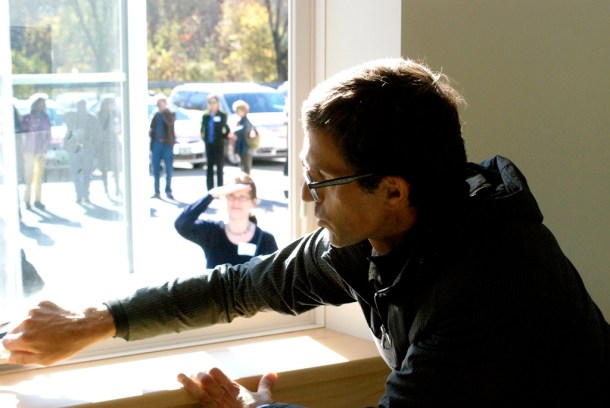 An energy consultant at Efficiency Vermont provides a tour of an energy-efficient and weatherized home. File photo by John Herrick/VTDigger

The commission, formerly called the Public Service Board, issued an order last week that will leave efficiency funding undiminished for the next three years.

According to the order, electric customers not served by Burlington Electric Department will see a notable decrease next year in the “efficiency charge” that partly funds Efficiency Vermont, followed by “modest increases” the following two years. The commission sets rates on a three-year basis.

The continued funding will save Vermonters money in the long run, the commission said.

“(C)ontinued investment in cost-effective energy efficiency will result in total electric and natural gas costs for Vermont ratepayers that are lower than they would otherwise be absent energy efficiency efforts,” the commission’s order states.

“These efforts not only yield savings for customers who install electric and natural gas efficiency measures, but also result in savings for all ratepayers through reduced need for power purchases by utilities and deferred need for system upgrades such as new transmission facilities,” the order states.

The order represents a good investment, even without the requested 8 percent decrease, said Riley Allen, deputy commissioner of the Department of Public Service.

“We think that, very broadly, these are sound investments in what’s generally the least-cost and most environmentally benign resource available,” Allen said. “But it’s a question of degree.”

Allen said conditions in the energy industry have changed enough since the last time efficiency charges were set that a funding cut made sense. Natural gas prices have lowered, as have oil prices.

Allen said members of the administration “would have preferred a different outcome, but we respect the board’s process.”

Environmental advocates hailed the PUC’s order as a good investment.

State policies are currently meant to encourage a shift from oil, natural gas and gasoline to electricity for heating and transportation. The shift could require major upgrades to the state’s electrical transmission and delivery networks unless efficiency measures keep that growing demand in check.

Levine said this transition is anticipated, but said it was not included in the analysis that led Scott to recommend a decrease in efficiency funding. This was among the shortcomings in Scott’s analysis that led the commission to reject his administration’s recommended funding decrease, Levine said.

“It was very hard to see the logic in their reasoning,” Wolfe said. “For them to say, ‘We’ve been doing so much efficiency we don’t need to do more’ doesn’t make sense. That was their argument.”

Wolfe said it’s unusual for the commission to depart so dramatically from the administration’s recommendations.

“It’s pretty rare for the commission not to go with the [Department of Public Service’s] recommendation,” Wolfe said. The disparity between the department’s recommendation and the commission’s order underlines the importance of efficiency for the state, she said.

The PUC must balance a range of objectives in setting out the efficiency budgets, according to state statute.

The efficiency charges should, according to statute, accomplish four outcomes in particular: reduce the amount of energy the state must purchase, reduce the volume of greenhouse gases the state generates, reduce the need for more costly infrastructure upgrades, and minimize the cost of electricity.

The commission budgets every three years for the state’s three efficiency utilities, and this year’s budgeting process has gone on since the fall.

The commission will calculate anticipated energy savings and other effects based on the funding in this order before issuing a final order this fall, but the budget numbers are final, said Abby White, marketing director at Vermont Energy Investment Corp., the entity that administers Efficiency Vermont.

Thanks for reporting an error with the story, "Administration rebuffed on call to cut energy efficiency funds"