In 2014, the most recent year for which data are available, Vermont ranked third in the nation and first in New England for per-capita spending in hospitals.

The data, originally published by the Kaiser Family Foundation, come from the U.S. Centers for Medicare and Medicaid Services, which releases data every five years on health care spending in different states.

The CMS methodology takes spending in Vermont hospitals — by residents of any state — and uses a mechanism to convert that to Vermont resident spending in all hospitals in any state. For that reason, the data are different from what regulators at the Green Mountain Care Board report every year.

“We here at the Green Mountain Care Board have been taking a look at that Kaiser Family report and we haven’t had enough time to digest it fully, but its, certainly, initial blush doesn’t look good,” said Kevin Mullin, the chair of the board.

Mullin said the board staff would look at different factors that could drive the data — including Vermont’s older population, rural nature, and high rate of people with insurance.

“We have really low numbers of uninsured, but if you take a look at Massachusetts, they’re doing just as well as us,” and its uninsured rate is lower, Mullin said. He said Massachusetts may benefit from having a major city.

“We’ve got to do a much deeper dive and try to get it all figured out before we can really say that we’re spending too much on hospital care in Vermont,” Mullin said. “We’ve known for years that hospitals have been the biggest drivers of health care costs in the state.”

“The Green Mountain Care Board since its inception has been successful at trying to curtail some of the growth, but obviously there’s always room to do more,” he said. 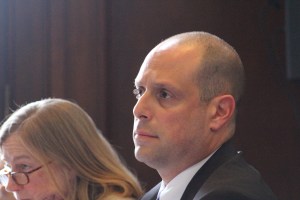 Jeff Tieman is president and CEO of the Vermont Association of Hospitals and Health Systems. File photo by Erin Mansfield/VTDigger

Jeff Tieman, the CEO of the Vermont Association of Hospitals and Health Systems, referenced a report from the Commonwealth Fund ranking Vermont first in the nation for the quality of its health care system.

Tieman said that while he has not looked deeply into the new data, there is “really good work that hospitals are doing to reduce costs, to add value, and to build a system that really truly puts the patient at the center of the care delivery team.”

“I can tell you that being a rural state is part of what contributes to cost,” Tieman said. “We’re in the same company as North Dakota, South Dakota, West Virginia, Wyoming, other states that have large rural populations.”

He also said people living in rural areas are “more likely to engage in risky health behaviors and experience higher rates of chronic conditions and even activity limitations that can all lead to hospitalization.”

Tieman also pointed to the state’s aging population, who tend to have greater health needs, and high proportion of people using Medicaid, “which means that our population skews toward a population with great need.”

He said his board, which includes all hospital CEOs in the state, is “really focused on how do we deliver the best possible care at the lowest possible cost. That’s what the CEOs are interested in.”

“We can slice and dice data in various ways, but I assure you the effort here is on delivering better, more-effective care at the lowest possible cost, and we’re always driving towards that,” Tieman said.

Michael Carrese, the spokesperson for the University of Vermont Medical Center in Burlington, the largest hospital in the state, said the information in the CMS data appears to be different from other reports he’s read showing Vermont has lower health care costs for Medicare patients.

He pointed to a report from the Green Mountain Care Board showing that the Burlington area is not the most expensive area in the state to get care. “I think that’s a fair indication that we’ve been working pretty hard on the cost issue,” he said.

“We really support transparency on cost,” Carrese said. “We’ve asked, in fact, for more analysis on cost in Vermont to be done because we want to have as much information as possible. Bring it on in terms of cost.”

Thanks for reporting an error with the story, "Data dig: Spending at hospitals among highest in nation"

Governor puts $53 million into IT projects, and pulls them all together

Governor puts $53 million into IT projects, and pulls them all together

Leahy ready to get ‘back to work’ after hospital visit