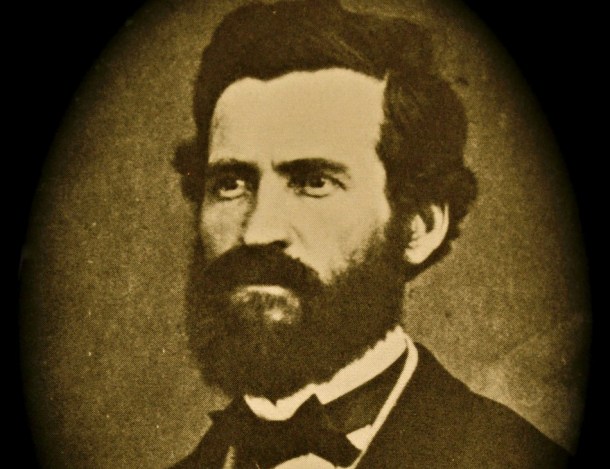 Mark Twain’s brother, Orion Clemens, brought some of the famed author’s edgy sarcasm to the pages of the Rutland Daily Globe, which he edited. Courtesy photo

[O]rion Clemens needed this job. He’d been down on his luck, which was a major theme in his adult life, but this job could change things. It paid $3,000 a year, a fair chunk of change in 1873, so there was no turning this offer down. He was moving to Vermont.

What awaited him here would be the job as editor of the Rutland Daily Globe, a new newspaper founded by a group of wealthy politicians to boost the prospects of the Republican Party.

For the first time in a long time, it seemed, Clemens was going to be able to make it on his own, without the help of his more successful younger brother, Samuel, better known to the reading public by his pen name, Mark Twain.

“He was eager to accept [the job],” Twain wrote in his autobiography. “His wife was equally eager — no, twice as eager, three times as eager.” Twain, however, begged Clemens not to take the job. But, he reported, “My beseechings and reasonings went for nothing.”

Twain thought his brother too soft for the position. “You are as weak as water,” Twain told his brother. “Those people will find it out right away. They will easily see that you have no backbone; that they can deal with you as they would deal with a slave. You may last six months, but no longer. Then they will not dismiss you as they would dismiss a gentleman: they will fling you out as they would fling out an intruding tramp.”

Orion Clemens, however, saw Vermont as his salvation.

As a young adult, he had moved around the Midwest, trying his hand in several fields. After apprenticing at a newspaper as a teenager, he began to study law in St. Louis, Missouri. But when his father died, Orion Clemens, then 22, returned to his hometown of Hannibal, Missouri, and purchased the local newspaper. But he failed to make enough money at the paper, so he sought his fortune in Iowa, where he again worked as a journalist, before running a printing shop.

He headed farther west in 1861 when the new Lincoln administration appointed him an official with the new Nevada territorial government. Clemens earned a respectable salary of $1,800 a year, and even served at times as Nevada’s acting governor. He was open-handed with his newfound wealth, paying to furnish the Nevada Legislature’s chambers, and even to print Nevada’s House and Senate journals.

But his efforts to become a permanent fixture in Nevada government fell short. He failed to win the nomination to run for secretary of state. He did win a seat in the Legislature, but the salary proved meager.

In 1864, tragedy struck. Clemens’ only child, 8-year-old daughter Jennie, died, apparently of meningitis. Jennie’s death hit him hard. Some family members said he was never quite mentally stable after her death. Soon after Jennie’s death, Clemens and his wife decided to move back east.

For much of the rest of his life, Clemens would rely on Twain’s largesse to survive. He returned intermittently to newspaper work and invested occasionally in ventures that inevitably failed. (Poor business acumen seems to have run in the family. Twain was fortunate that his writing produced enough income for him to survive his own bad investments.)

Clemens ventured north to Vermont in 1872 to seek his fortune. He thought he could make a go of it here if he could purchase a newspaper, with his brother’s financial backing. He set his eyes on the Rutland Herald. “The best thing I have seen on my whole route,” he wrote in a letter to his wife. But he failed to negotiate a deal with the Herald’s owners, and he returned to Connecticut to take a newspaper job.

Early the next year, however, the backers of the Rutland Daily Globe came calling. Perhaps they knew that Clemens’ brother was a well-regarded humorist — though Twain had yet to write his most famous novels, “Tom Sawyer” and “Huckleberry Finn.” Or maybe they valued Clemens for his own gifts. Twain had complimented his writing in the past. 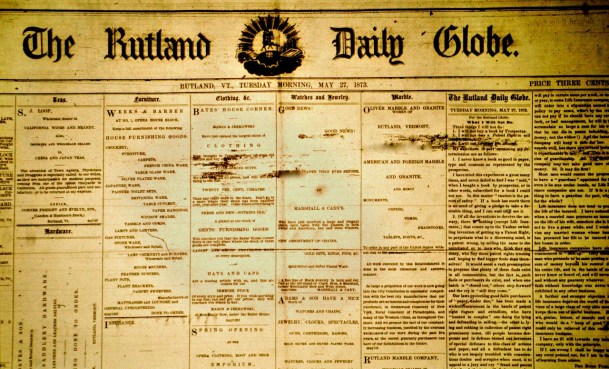 Orion Clemens hoped a job editing the Rutland Daily Globe would reverse his misfortunes. The job proved yet another disappointment for Mark Twain’s brother. Courtesy photo

Whatever their reason for hiring him, Clemens assumed the position of editor for the Rutland Daily Globe in time for its first edition on May 1, 1873. The paper showed promise. Local businesses bought numerous advertisements, and offered their services to what they were certain would be the Globe’s thousands of readers. The four-page daily edition cost 3 cents. An annual subscription, if paid in advance, cost $2.50.

From the start, Clemens decided to produce a newspaper with a strong voice and attitude. The Globe’s news briefs, rewritten from accounts taken from other papers, were often edgy and sarcastic, a style Orion apparently shared with his brother.

“Marriage should generally be an affair of two persons’ arranging,” the Globe declared on May 6, 1873. “But sometimes relatives, in their earnest solicitude for the happiness of those near and dear to them, use active measures of prevention. A young man in Belleville, Illinois, on Saturday night, secured his sister’s happiness forever by blowing out the brains of her affianced. His reason for preventing the marriage was that it did not meet his approval. It is not every sister who is blessed with such pathetic brotherly affection.”

In another brief, the Globe reported on the murder of a 9-year-old boy by a 15-year-old boy. The editor declared this a “curious instance of hereditary wickedness,” since the murderer’s grandfather had been hanged for murder and his father had committed suicide. “We none of us know just how much of our wickedness comes by nature and how much from self-cultivation,” the Globe wrote. “This boy probably started in life with more than his share.”

Twain was right that his brother wouldn’t last six months in the job — he lasted about two. Clemens’ undoing may have been a tiff that started between the Globe and the Herald.

According to Twain biographer and Vermont author Ron Powers, the papers started bickering over politics, with the Herald’s editor attacking Clemens and others at the Globe as “soreheads.” Clemens’ paper called the Herald’s editor a “sellout,” to which the Herald responded by referring to its competitor as the Globule.

Soon after the war of words started, Clemens departed the Globe and left Vermont. The paper held on for several more years before folding. His later years were as ill-fated as his earlier ones. Gainful employment proved elusive, and he continued to rely on Twain for money.

“A body forgets pretty much everything, these days, except his visions of the poorhouse,” Clemens, then in his late 60s, wrote Twain’s wife.

We know little of how Orion Clemens viewed his time in Vermont. The answer might have been contained in the autobiography he wrote. But the handwritten manuscript was lost in a fire, or perhaps in a stolen briefcase — explanations vary. Either way, it amounts to the same thing: more bad luck for Mark Twain’s brother.

Thanks for reporting an error with the story, "Then Again: Twain’s ill-fated brother did not prosper in Vermont"

Andrew Garland: Keeping a keen eye on the cost of care