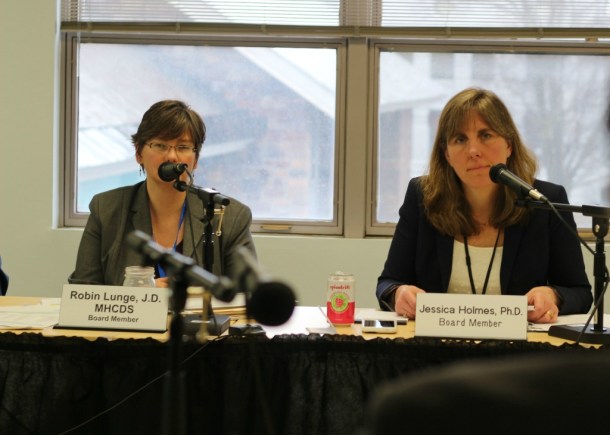 ​Robin Lunge, left, and Jessica Holmes are two of the three remaining members of the Green Mountain Care Board. File photo by Erin Mansfield/VTDigger

[T]he Green Mountain Care Board says it cannot make a decision on whether to approve a controversial surgical center, citing vacancies on the board.

The board is supposed to have five members. However, it has been operating with just three since January, when Al Gobeille became the secretary of the Agency of Human Services and Betty Rambur moved to Rhode Island.

The remaining members — Jessica Holmes, Con Hogan and Robin Lunge — wrote Friday that they will table the application for the proposed Green Mountain Surgery Center until two new members join the board and can help make a decision.

Citing case law, they said that to make an enforceable decision, all three current members need to agree on an outcome because that would represent a majority of the five-seat board. However, “the board has not reached a consensus and is therefore without authority to issue a decision at this time,” they wrote.

When two more members join, the board wrote, they will review the record of the case and decide whether to grant the permit. The members did not say they would hold an additional hearing or take additional arguments.

The lack of decision leaves no clear end in sight for a permit case that has dragged on for nearly two years. Investors first applied to open the Green Mountain Surgery Center in Colchester in July 2015 and were given a hearing in April.

The surgical center investors have promised to provide the same surgeries that people could get at hospitals but to charge about half as much. That’s because Medicare pays these types of surgical centers about half what they pay hospitals for the same services, and both commercial insurers and Medicaid base their prices on the Medicare methodology.

Both the Vermont Association of Hospitals and Health Systems, which represents the state’s 14 hospitals, and Northwestern Medical Center in St. Albans have been intervening. They staunchly oppose what they refer to as a for-profit entity that would take away revenue from local hospitals.

Gov. Phil Scott said Friday, just hours after the board said it could not make a decision, that he is “very close” to appointing new members. He said he was not aware of the situation hampering its work but said, “I could imagine that it could be.”

Amy Cooper, the lead representative for investors in the Green Mountain Surgery Center, said the center is being held to a “higher standard” than other projects because the three members must unanimously approve it. She said she is working with her lawyers to determine future action.

“I am hopeful, though, that Gov. Scott, who ran his campaign on affordability for Vermonters, I would hope that the people he appoints to the Green Mountain Care Board would support more affordable health care services for Vermonters,” Cooper said.

Jeff Tieman, the chief executive officer of the hospital association, said in a statement: “This will be a precedent-setting decision, and we appreciate the GMCB’s time and effort to ensure that the points hospitals have raised are fully and thoughtfully considered.”

The board said it would hold a status conference with the parties in the next two weeks to discuss the future of the case.

Thanks for reporting an error with the story, "Shorthanded regulatory board can’t agree on surgical center"

Vermont reports record 314 Covid cases, suggests IT problem could be to blame